Tension over the Reform Act arises over key provisions requiring individuals with disabilities to give notice to businesses before filing a noncompliance lawsuit under the Americans with Disabilities Act (“ADA”).  Currently, an individual can bring a lawsuit under Title III of the ADA immediately for a business’ failure to comply with the ADA. Under the proposed law, after receiving notice, the business would have 60 days to provide a written plan describing how the business will conform to the ADA’s requirements.  The business then could take another 120 days to remove or make “substantial progress” toward removing the accessibility barrier.   Individuals with disabilities would have to wait at least 180 days, if not longer, to enforce their civil rights under the ADA. 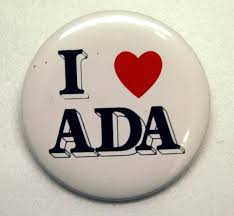 Although disability rights activists and many supporters of the disabled community oppose the proposed law, the Reform Act has some bipartisan support in Congress in an effort to stem the tide of excessive “drive-by” lawsuits.

Do we have a “Drive By” Lawsuit Problem in the United States?

“Drive-by” lawsuits are a practice where unscrupulous attorneys file hundreds of lawsuits alleging often minor, technical violations of the ADA.  Lawyers working with as little as one plaintiff file lawsuits with boilerplate complaints looking for quick settlement payouts.  These lawyers have often only visited the business they are suing one time and sometimes neither the lawyers nor their clients are patrons of the business.

Recent, more extreme versions of “drive-by” lawsuits are called “Google lawsuits;” where lawyers file lawsuits just by looking for ADA violations on Google Earth.  By some estimates, businesses pay an average of $16,000 to settle these lawsuits rather than paying significantly more in legal fees to challenge the lawsuits in court.  Under Title III of the ADA, a plaintiff cannot recover damages, but can recover attorneys’ fees along with injunctive relief (see p.378).  Proponents of the Reform Act argue that these remedies promote excessive litigation.

Unfortunately, these “drive-by” lawsuits often do not result in increased ADA compliance.  These settlements are often just shakedowns for cash, which may not actually lead to fixing the underlying ADA violation.  As a result, some in the disabled community feel that these “drive-by” lawsuits actually harm relations between businesses and persons with disabilities.  Still, could the Reform Act do more harm than good?

Could the ADA Education and Reform Act Damage the ADA?

Originally enacted in 1990, the ADA has improved the lives of countless individuals with disabilities.  The ADA passed with widespread bipartisan support and is considered one of the most comprehensive and progressive disability civil rights statutes in the world.  In fact, many other nations have modeled their disability rights laws after the ADA.

The ADA is effective, in part, because of two key areas: Title I and Title III, which allow private rights of action to enforce individual rights.  Title I protects persons with disabilities in the employment context, and Title III protects persons in public accommodations.  Under Title III, places of public accommodation must remove accessibility barriers, but only if this is “readily achievable” and not and where removing barriers would require a fundamental alteration or an undue burden.  Unfortunately, although employers and places of public accommodation must proactively comply with the ADA, persons with disabilities often have to bring lawsuits to enforce the provisions of the ADA.  Businesses comply with the ADA not only because it is the right thing to do, but also because of the threat of lawsuits.

Accordingly, disability rights activists decry the Reform Act as a thinly veiled threat to disability rights.  The proposed law would fundamentally shift the balance of power for ensuring compliance to favor businesses.  Instead of proactive compliance, businesses could sit on their hands and wait to be sued.  Then, businesses would only have to show “substantial progress” toward compliance, not even full compliance, over the course of months.  For those who are legitimate patrons of a business and who require accessibility, waiting six months or more for “substantial compliance” is simply not a realistic option.

A Path Forward:  Changing Our Perception

Disability rights attorney Robyn Powell argues changes can be made without the Reform Act.  First, Ms. Powell posits that attorneys are bound not to represent individuals in frivolous lawsuits; making this is an issue for state courts and bar associations to address, not Congress.  Second, Ms. Powell points out that the, “ADA does not require any action that would cause an ‘undue burden’ or that is not ‘readily achievable,’” for a business to accomplish.

Many of the issues that the Reform Act seeks to address are issues that can be resolved without curtailing the civil rights of persons with disabilities.  Both the business community and the disability community have mutual interests in ensuring that frivolous, “drive-by” lawsuits are prevented.  However, rather than place severe restrictions on the rights of persons with disabilities through an extensive period of notice and opportunity to cure, other options should be considered.

States and their respective state bar associations could opt to impose stricter penalties for attorneys filing frivolous lawsuits under the ADA.  Coupled with these stricter penalties, state bar associations could also adopt mechanisms like thresholds for the number of lawsuits that can be filed with one plaintiff under the ADA before an investigation is triggered.  Alternatively, we could adopt requirements that prioritize injunctive relief over attorney’s fees or damages.  Such requirements would force parties to engage with each other and would reduce the number of businesses that can be subject to “drive-by” lawsuits.  Further, injunctive relief under the ADA would be consistent with the goals of truly achieving accessibility.  At the very least, if the Reform Act moves forward, it should be amended so that the notice and opportunity to cure period is significantly shorter in order to lessen the burden that would be shifted to persons with disabilities.

Finally, when it comes to accessibility we would all do well to remember that accessibility is a universal issue, not just a disability issue.  For example, stairs are an accommodation to people who are capable of walking to move between floors.  Despite the frustration of these “drive-by” lawsuits, the fact that these lawsuits exist serve as a reminder that we must continue the push for improving accessibility for all people.  With increased accessibility, there will be less opportunity to take unfair advantage of laws like the ADA.

Nicholas Stone graduated from Boston University School of Law in May 2018.  He plans to practice in Portland Oregon.