What Never Was: The Indigenous American Cultural Heritage Repatriation Problem

The unfortunate beginnings of the fetishization of Indigenous American cultural heritage occurred concurrently with the systematic disenfranchisement of Native Americans throughout the United States. These events led to the amassing of millions of Indigenous American cultural heritage objects in federal repositories, museums, and private collections by the early twentieth century. Concurrently, archaeologists and anthropologists, largely funded by public research institutions like museums and universities, thoroughly destroyed prehistoric and historic sites in the hunt of the next ancient relic. The culmination of these events as well as forced assimilation created the idea that Indigenous Americans vanished and further justified the amassing of their cultural heritage. Unfortunately, today’s global society still believes in the vanishing Indian.

The Native American Graves Protection and Repatriation Act (“NAGPRA”) was supposed to protect the heritage of the Indigenous Americans, but it is deeply flawed and needs to be either amended or replaced.

The Supreme Court ruled in Lyng v. Northwest Indian Cemetery Protection Association that the American Indian Religious Freedom Act (“AIRFA”), 42 U.S.C. § 1996, merely reiterates the First Amendment. Thus, the U.S. Forest Service (“USFS”) continued with road construction after minimizing the immediate impacts to the Yurok’s, Karok’s, and Tolowa’s religious practices. After the decision, the Indigenous American community knew they needed heightened protections, and the Senate Select Committee on Indian Affairs concluded that  federal legislation was necessary. On the heels of the committee findings, federal legislation was drafted and enacted. NAGPRA was supposed to positively affect the acquisition and repatriation of Indigenous American ancestral remains and cultural heritage. 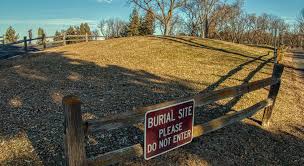 Congress enacted NAGPRA to protect Indigenous American graves and repatriate remains, providing for proper tribal burials and religious rites. Although the legislative history suggests good intentions, the federal legislation provides a façade for museums, galleries, and collectors to continue acquiring and exhibiting Indigenous American cultural heritage. NAGPRA, enacted in November of 1990 and effective a year later, requires federal agencies and institutions benefiting from federal funding that have “possession or control over holdings or collections of Native American human remains and associated funerary objects [to] compile an inventory of such items and, to the extent possible based on information possessed by [the agencies and institutions, to] identify the geographical and cultural affiliation of such items.” From here, institutions and federal agencies inventory their collections “in consultation with tribal government [officials]. . . and traditional religious leaders” and supply records for better determining “the geographical origin, cultural affiliation, and basic facts surrounding [the] acquisition and accession of Native American human remains and associated funerary objects . . . .” “If a ‘cultural affiliation of Native American human remains and associated funerary objects’ is established with a particular tribe, then ‘upon the request of a known lineal descendant of the Native American or of the tribe[,]’ the museum must ‘expeditiously return such remains and associated funerary objects.’”

NAGPRA is but one illustrious example of the federal government fostering conflict between Indigenous American religion and Eurocentric ideals of science. While religion and science both concern themselves with “the human identity and defining our place in the universe,” their methods employed to achieve these goals often conflict. Science utilizes deductive methodology emphasizing quantifiable information and discernible facts and leads to evidence-based conclusions. Region supports discovery through “faith, complex belief systems, and longstanding traditions supported by cultural awareness.” The answer is not and never has been one practice over the other, and America’s past placed Congress in an important decision-making role to efficiently incorporate both viewpoints. What Congress enacted is neither effective nor efficient legislation, but an all show, no substance process.

Indigenous Americans view funerary, sacred, and cultural patrimony objects as the extensions of once-living ancestors, and therefore deserving of the same protections afforded to ancestral remains. Treating these objects as anything less offends Indigenous American cultural practices, and disturbances “force the spirits of those individuals to wander without rest.” The scientific viewpoint sees historical and scientific value in ancestral remains and their associated objects. Bioanthropologists premise their work around these objects and remains, hoping to learn more about past and present populations as well as information about the individual ancestral remains. Bioanthropologists swayed Congress with their wishes to retain ancestral remains for future study, supporting their argument by suggesting future technologies might provide unknown answers. Of course, Indigenous Americans’ oral histories provide the answers, but the judiciary and bioanthropologists brushed those claims aside. Thus, scientists and Indigenous Americans remain on polar extremes—“either believing in continued possession for research purposes or insisting on immediate burial without study.” Congress enacted NAGPRA with a focus on the repatriation of ancestral remains and associated objects. Yet, the rushed and sloppy NAGPRA legislation contains loopholes and lacks enforcement mechanisms.

NAGPRA falls flat when repatriating cultural heritage not culturally identifiable and not traceable to a contemporary and federally-recognized tribe. These limitations result in 73% of remains remaining in museum collections because they were deemed non-affiliable and not repatriable. “[T]he unaffiliated remains of more than 115,000 individuals and nearly one million associated funerary objects have sat on museum shelves in legal purgatory.” A March 2010 amendment, Disposition of Cultural Unidentifiable Human Remains, attempted to redress these limitations. Before the amendment’s enactment, a majority of ancestral remains were classified as non-affiliable and outside NAGPRA’s initial scope.

NAGPRA, in its current state, fails on multiple fronts. First, the amendment addresses unaffiliated ancestral remains, but does 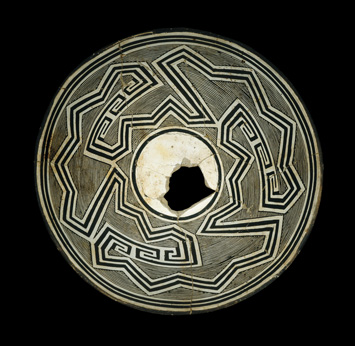 (© President and Fellows of Harvard College, Peabody Museum of Archaeology and Ethnology, [24-15-10/94603 + 60740377])
Mimbres bowls, produced by people living in the Southwest from the late 10th to early 12th century A.D., are renowned for the unique imagery found on their interiors. The black-on-white ceramics were often decorated with geometric patterns.

not resolve the issue with funerary and sacred objects such as Mimbres bowls. Second, NAGPRA requires museums, federal agencies, and public institutions to consult with tribal governments in determining affiliation and recommendations of repatriation, yet this important step rarely occurs. Third, cultural affiliation rests upon the interpretation of a preponderance of evidence determined by the same collection of museums, federal agencies, and public institutions retaining the Indigenous American cultural heritage. Fourth, only federally-recognized tribes may bring repatriation claims, thus eliminating hundreds of tribes awaiting or denied federal recognition. Fifth, NAGPRA only applies to federally-funded institution and federal agency collections. Consequently, federally-funded institutions receiving promised gifts and loans from private collections circumvent NAGPRA responsibilities. Finally, NAGPRA established the Committee, made up of seven members, which reviews repatriation claims when requested by any of the involved parties. However, the Committee merely publishes non-binding advisory findings. Language not clearly explained by Congress can be reasonably interpreted by federal agencies provided they give adequate explanations, and thus provides major deference to agency decisions. Therefore, the current loopholes allow federal agencies and federally-funded institutions to act as the decision makers for repatriation claims, and leads to biased outcomes against the marginalized Indigenous American tribal communities.

Congress limited NAGPRA’s effectiveness by omitting dissuasive penalties for federal agencies and federally-funded institutions. In fact, the legislation is completely silent on penalties towards federal agencies. Subsequently, most federal agencies have not completed collection inventories, a process required to place tribes on notice of NAGPRA-protected cultural heritage and ancestral remains. NAGPRA required completed inventories no later than November 16, 1995, yet the Department of the Interior’s (“DOI”) agencies have failed at cataloging over 78 million cultural heritage objects and ancestral remains. Thus, tribal governments cannot place repatriation claims and have no course of action for dispute settlements.

The DOI’s Secretary assesses civil penalties to federally-funded institutions who fail to comply with NAGPRA. Nevertheless, federally-funded institutions frequently circumvent any penalties if they reasonably explain their decisions not to repatriate based on a preponderance of the evidence, regardless of the Committee’s recommendations. Legislation without adequate enforcement measures leaves agencies and institutions with too much power and tribal governments incapable of obtaining the just and fair outcomes sought.

For Indigenous Americans, NAGPRA continues to fail and fall flat on Congress’s goals thirty years later. Improper interpretation of NAGPRA and unfair results will continue without reconsidering the current legislation and elaborating upon the ambiguities. Next session, Congress should, at the very least, take action to close the NAGPRA’s loopholes and add meaningful penalties.  Even better, it should take this opportunity to completely rethink its approach to restoring and protecting the sacred objects of Indigenous Americans.