A Visit to the Arizona Legislature

This summer vacation brought me to Phoenix Arizona.  Not quite our usual family trip to the beach, but we are attending the Irish Step Dancing National Championships.  While my daughters practiced, I had a chance to visit the Arizona Legislature (kind of).

Unfortunately, the old Capitol Building, which now houses the Arizona Capitol Museum was still closed due to Covid-19 restrictions.  It is an impressive building with a copper dome (copper mining has been a huge part of Arizona’s history) and the Winged Victory statue on top. 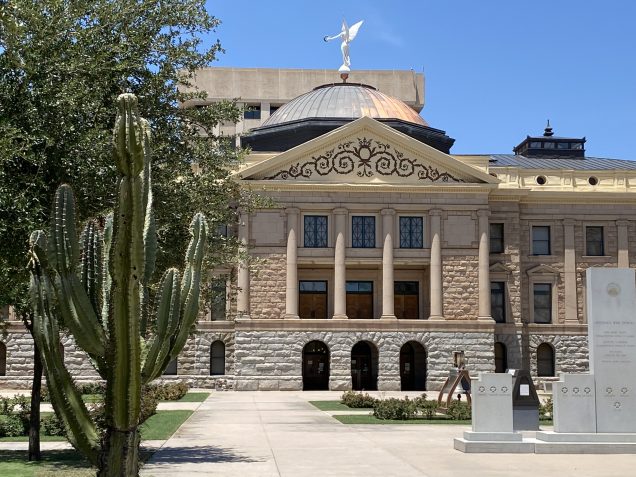 Purchased for $150, Winged Victory changes direction with the wind—a feature drunk cowboys would take advantage of for fun.  After drinking in one of Phoenix’s saloons, the cowboys apparently would try to make Winged Victory spin by shooting it with their revolvers. 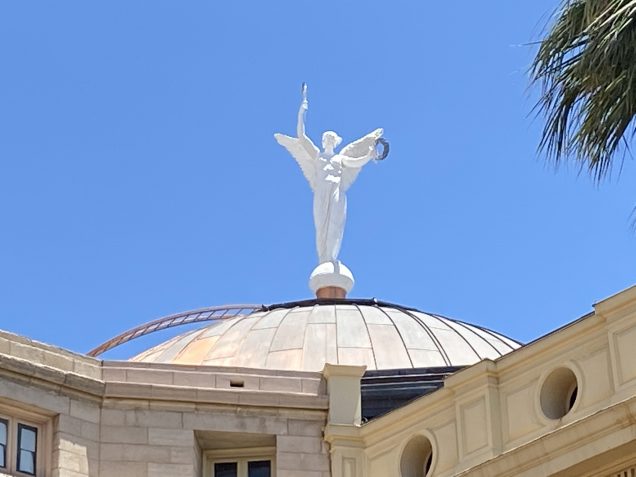 The House and the Senate are in separate 1960s-era concrete buildings on either side of the old building. 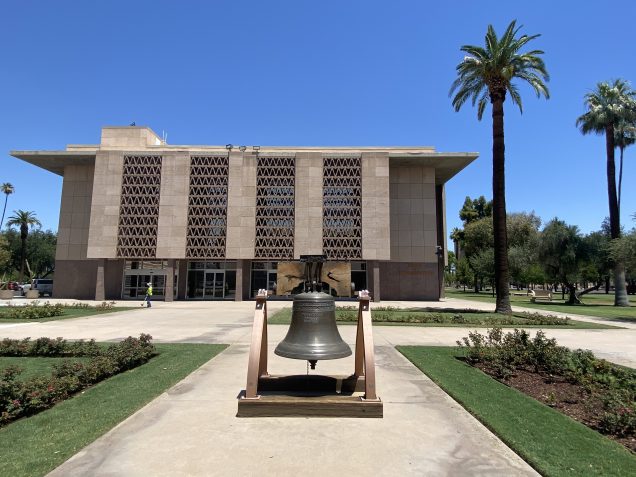 I had a chance to see the House chamber with its decorative panels of the Grand Canyon. 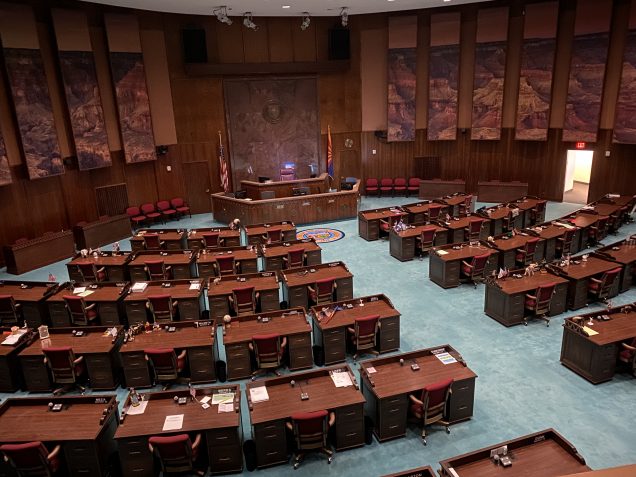 The House also had a sculpture of its longest serving member, Edwynne Culter “Polly” Rosenbaum (1899-2003). 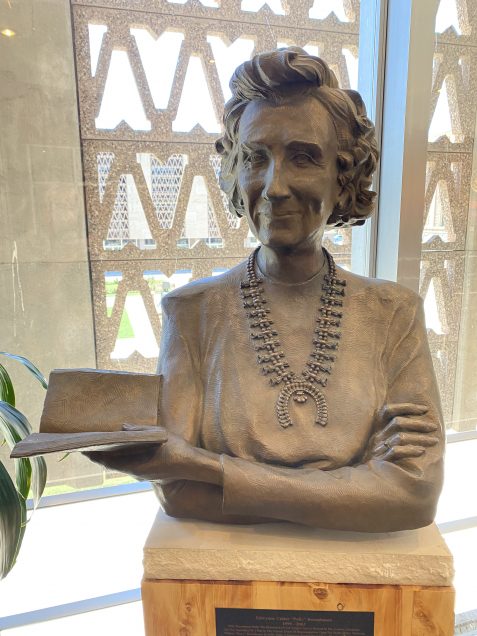 Rep. Rosenbaum (D-Globe) started her legislative career in 1949 when her husband Rep. William “Rosey” Rosenbaum passed away and she was appointed to fill the rest of the term.  She served for the next 45 years until 1994–an incredible record that will never be beaten unless Arizona’s 8 year legislative term limits are repealed.

The House staff was welcoming—especially Steven at the front desk who was very knowledgeable.

Unfortunately, I could not get into the Senate chamber.  Apparently, Senate President Karen Fann (R-Chino Valley) still has not lifted her Covid-related closure of the building.  Perhaps this will happen after her “audit” of the 2020 Presidential election in Maricopa County is finished.  In a funny moment, I asked several staff members in the House Building where the Senate’s audit was taking place.  One said the ballots were now in Montana; yet another said the ballots were in Florida; one staffer said he thought the audit was finished.  It’s really hard to believe this process has been called into question!

The mall in front of the government building had several touching memorials: There is a statute honoring the Navajo Code Talkers who were so key to victory during World War II, 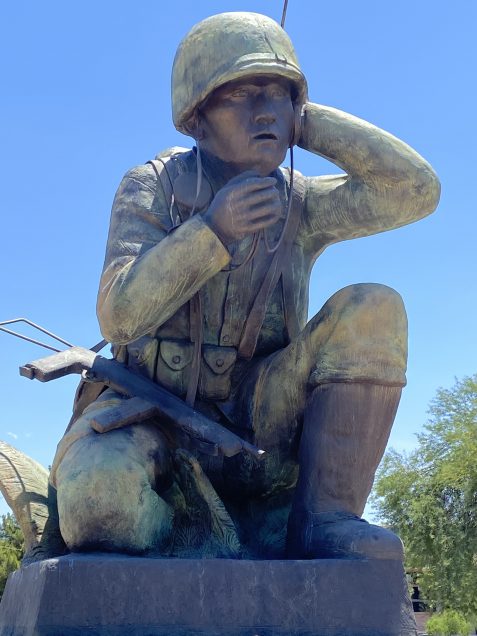 the anchor from the USS Arizona, 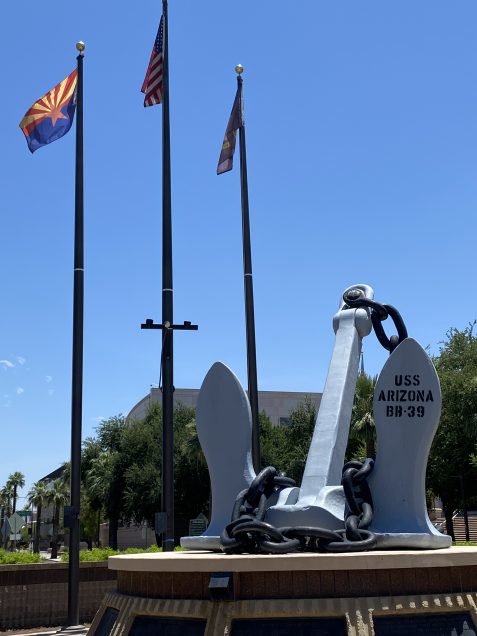 the Bill of Rights carved into large standing stones, 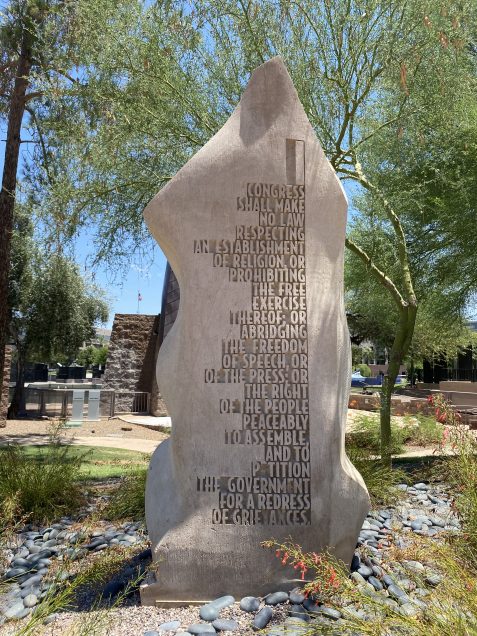 and a life-sized statue of a family with one parent handing the other a baby. 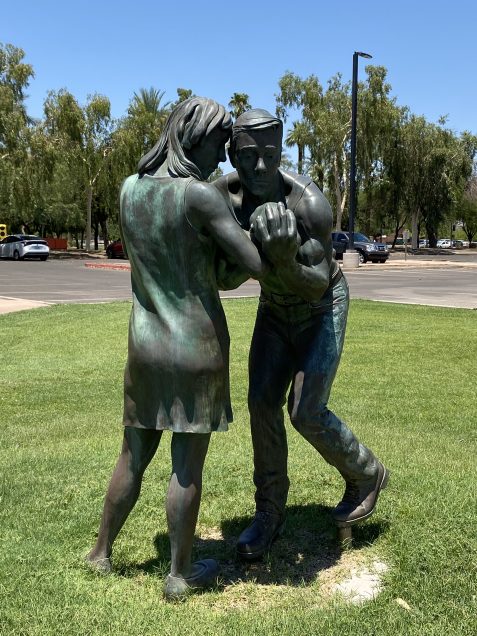 This statue, titled “El Pasaje” is a tribute to the workers of Arizona, who have been injured while working.  This is an especially poignant memorial given the recent political battles over immigration.

Although it was too bad I could not see everything I wanted to, it was still worth the trip.