A More Perfect Election: Which COVID Election Reforms Massachusetts Should Keep And What Needs To Be Fixed

While the COVID-19 pandemic will no doubt be remembered as one of our nation’s most tragic events there may be at least one bright spot that emerges from an otherwise catastrophic era: a ground up rethinking of elections systems. It’s was not ideal timing; many voters believed that the 2020 general election was the most important in a generation and also feared that mass voting system reform would wreak havoc. Nevertheless, the COVID-19 election experience offers the opportunity to create needed and lasting improvements to our electoral system.

The Massachusetts Legislature prepared for the pandemic election by passing “An Act Relative to Voting Options in Response to Covid-19” a few months before the September 1, 2020 primary. The Act provided for early voting before the primary and greatly 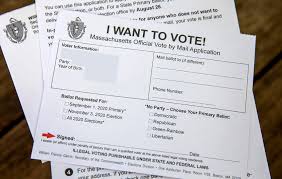 expanded access to mail-in voting for both the primary and general election. Most of the Act’s provisions expired on December 31, 2020, but this may be for the best; the Legislature should develop a more permanent election reform bill during the new legislative session. Below are provisions lawmakers should keep—and scrap.

KEEP: No-excuse vote-by-mail option for both primary and general elections.

Current Massachusetts law allows no-excuse mail-in voting only for biennial general elections. In other elections a voter must be either absent from their municipality or physically disabled to qualify for mail-in voting. The recent act allowing mail-in voting for the primary should become the norm.  Of the estimated 18.9 million registered voters who did not cast a ballot in 2016, 19.3% percent cited reasons (see table 4) such as transportation problems, busy schedules, inconvenient polling places—and another 3% simply forgot. When Colorado implemented all-mail voting in 2014, election turnout increased 9.4% overall. The biggest gains were with traditionally low turnout groups: younger voters (16.6% increase), blue-collar workers (10%), and minority voters (13.2% for Black voters, 10% for Latinx voters, and 11.2% for Asian voters). Utah  and other states increasing vote-by-mail saw similar increases in turnout.  This year, 1,705,388 voters participated in the Massachusetts primary; the highest raw vote count ever for a primary. Granted, there was great voter enthusiasm due to contentious US Senate race between Senator Ed Markey and Congressman Joe Kennedy, but a lot of credit should go to the COVID-19 election reforms since about half of the ballots were sent by mail. In a state where non-Presidential Primary elections have peaked around 26% in the last 30 years, there’s no doubt that mail-in balloting is the way to keep this number rising in future.

Currently, Massachusetts requires voters to fill out and return an application to receive their mail-in ballots. Legislators should scrap this unnecessary and costly hurdle and join 10 other states that mail ballots to all registered voters.

First, the application requirement costs the Commonwealth a lot of money. Undoubtedly, the state made the right move by mailing applications to every voter—but paid postage for at least 4.6 million pieces of mail one-way, and millions more that were returned.  There is also the cost of labor to prepare the mailings and process the returned applications. Secretary of the Commonwealth William Galvin estimated that each of the two mailings cost around $5 million.

Secondly, mail-in ballot applications are a superfluous hurdle to casting a vote in a primarily mail-in election regime. To a voting populace that already has difficulty meeting registration deadlines or remembering election day, an application requirement presents yet another step to forget and a deadline that can easily be missed. Mailing ballots directly to voters eliminates this unnecessary barrier to entry and ensures that every voter receives a ballot in a timely manner, no hoop-jumping required.

The July bill added the option of returning mail-in ballots “via a secured municipal drop box.” This was a huge win for both busy voters who are skeptical of the USPS and for the Commonwealth, which saves money on the return postage. This is a long-term change reflected in the written statutes and should be a positive change in all future elections!

Current Massachusetts law only allows counting late ballots if they come from overseas. In the COVID Act, the legislature adopted a 3-day extension for ballots postmarked by election day for the November general election, but not the primary election.  This distinction lead to an unsuccessful legal challenge by a candidate in the Democratic race for the Fourth Congressional District. 8,000 ballots were later rejected for arriving past the deadline. Given the recent problems with the USPS, the election day receipt deadline simply won’t cut it.

The 3-day window was a good starting point, but it is falls woefully short of the laws in other states. In 2020, 24 states have receipt deadlines of at least 5 days, and of those, 14 states allow ballots to be counted even beyond 5 days. It’s difficult to pinpoint the appropriate amount of time needed here in the Bay State without more data, but there’s no reason that progressive Massachusetts should have anything shorter than a 5-day late ballot allowance.

It’s unavoidable that a certain amount of ballots will be returned unsigned or in the wrong envelope. In September, at least 3,000 ballots were discarded because of a defect. Although Massachusetts is one of 18 states with a “cure provision” that allows voters to fix the defect with their mail-in ballot, there is room for improvement. In 2020, when the clerk received a defective mail-in ballot, the official must mail the voter a form explaining that their ballot was rejected and a substitute ballot, but only if “there is clearly []sufficient time for the voter to return another ballot.” (950 C.M.R. § 47.10(5)(b)).

Massachusetts should make two important changes to ensure every voter has their ballot counted. First, change the methods of notification. Massachusetts should copy Hawaii and Rhode Island and allow election officers to notify voters of a defective ballot by first-class mail, telephone and email. Second, allow voters to cure their ballot past election day.  Other states offer anywhere from 2 to 14 days for voters to fix any defects in their ballots. These measures should help to close that final gap between ballots cast and votes counted.

There are positive signs that Massachusetts could be moving towards a primarily mail-in election future. Hopefully, the legislature will mitigate the pitfalls from this year’s attempt and incorporate successful policies used by other states to ensure that all voters have a meaningful opportunity to participate.

Emily Swanson anticipates graduating from Boston University School of Law in May 2022.