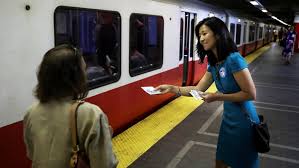 If you’ve lived anywhere near the Boston metropolitan area in the past few months, you will no doubt have faced a barrage of discussion in the media and manifestos about the prospects of making the T (Boston’s public transport system) free for all riders. Mayor Michelle Wu has headed up the push to make the historic MBTA free and used it as a major issue in her Mayoral campaign. Mayor Wu wrote an Op-Ed in the Boston Globe as far back as January 2019 advocating for free public transit, citing improvements to air quality, economic mobility, racial equity. Wu even donned a golden, token style pendant with the classic T logo in many of her campaign advertisements. This in-vogue concept also has the support Congresswoman Ayanna Pressley and former Democratic candidate for governor and former state senator Ben Downing vowed to “make the T free by the end of his first term.” Another former gubernatorial candidate state senator Sonia Chang-Diaz proposed a state-wide free public transportation agenda, starting with buses. There have been small steps toward this goal such as making three bus lines free for two years. This article is designed not to demonstrate the positives of free public transit, of which I am a strong proponent, but how we can make the program more palatable for those on Beacon Hill. 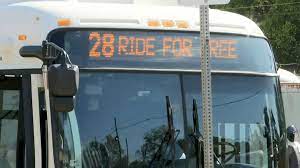 But there are sceptics and critics at all levels of Massachusetts politics. Former Mayoral candidate Annissa Essaibi George would criticize the idea of going entirely “fare-free” as fanciful, while House Speaker Ron Mariano and Senate President Karen Spilka have not committed to a fare-free MBTA system. Importantly, current Massachusetts Governor Charlie Baker opposed the idea of eliminating fares, unless “Boston is willing to pay.” Baker does raise some compelling points, asking why those in “the Cape, on the North Shore, in Central or Western Mass” should pay for Boston riders.  Currently, fares account for only around a third of the MBTA’s $2 billion budget, so how do you make up this shortfall in the utopia of a fare-free city?

This is a bold, progressive, and commendable policy proposition, and while it may be very popular amongst locals, there is not much appetite for it on Beacon Hill due to cost. Most proponents suggest funding this program by raising taxes. Ben Downing proposed using some of the $5 billion in funds from the American Rescue Plan Act, and tax revenue from a popular “millionaires’ tax,” as well as gas tax hikes of 10-15 cents (bearing in mind this was proposed pre-inflation and the Ukraine/Russia conflict) and a sales tax on Uber and Lyft rides. Sonia Chang-Diaz likewise has proposed levying a state millionaires’ tax to fund the policy. Michelle Wu took a slightly different approach, suggesting that “regional ballot initiatives” are the way to raise finances for a free MBTA. Regional ballot initiatives ask voters in localities in a small demographic if they approve of raising certain taxes i.e., sales, emissions, property tax. This is certainly one way to rebut Governor Baker’s “why should Massachusetts pay for Boston” argument.

Temporary funding like the ARPA is not sustainable and increased gas taxes is probably a non-starter in this age of sky high gas prices, although Sen. Downing was right to use the problem to pay for the solution.  A millionaires’ tax may be a popular possibility, but may not be long-standing enough or raise enough to subsidize the T. Wu’s regional ballot initiative idea is more compelling and something we see elsewhere, (California, Colorado, Georgia etc.),  but asking local riders to pay for something they want to make free seems counterintuitive. 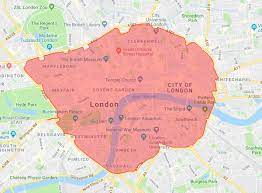 There is room, however, for creative policymaking solutions to kill two (or three) birds with one stone. Owing to my transatlantic tendencies, I believe the city of Boston should implement a “Ultra-Low Emissions Zone” used by the city of London. The ULEZ is a mapped zone in the London city centre that, once entered, registers your license plate with cameras, and charges you £12.50 for vehicles not compliant with emissions standards. In the first year, the ULEZ brought in £400 million in revenue, equivalent to around $524 million USD. Of course, congestion charges are not free of controversy, and special considerations or permits must be given to taxis, Ubers, first responders and construction companies working in the city for a prolonged period. London is, however, significantly larger than Boston, and does not use the funds to subsidise the public transportation system. This can be done on a smaller scale within the city limits of Boston, perhaps inclusive of the area spanning the green line. 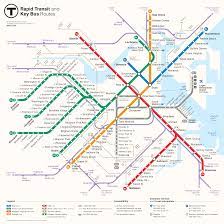 What this ULEZ would do in Boston is not only grant the accessibility, economic mobility, job creation and ridership but also substantially reduce the emissions of vehicles which count towards 40% of the carbon footprint of Massachusetts. This way, you can tax the problem as well as make those who want to come to Boston pay for Boston public transit. Alongside this, the need for road maintenance, a major gripe of New Englanders, would be significantly reduced on the city’s busiest roads – a significant cost to the public purse.

An exponential increase in ridership post COVID-19, is what the T needs, and as shown by making the Route 28 bus free in a pilot scheme, ridership increases by at least 22%, something that would undoubtedly be higher in high traffic lines like the green line. Higher ridership alone can help with budgetary issues. Being able to have thousands more take the city subway into pandemic-recovering businesses and restaurants would be a welcome injection of footfall.  This would be both a sustainable, and environmentally sustainable policy concept that could continually fund the shortfall that a free transit system would create in the budget.

As outlined by Attorney General and gubernatorial candidate Maura Healey, there is a growing consensus that Massachusetts infrastructure is crumbling, and drastic investment is an absolute requirement.  Massachusetts is in a rare position where we can slash deadly emissions caused by vehicle pollution whilst simultaneously. The 15% of annual income that  everyday Americans fork out for transportation, would be greatly reduced in metropolitan Boston. ‘But there is also momentum in the notion that environmental justice equals racial justice, and a huge step towards achieving transit justice would be taken by implementing the ULEZ to fund the hallmark of Massachusetts’ public transit system. That is how you make Boston a pioneer in sustainability, and an easy pill for Beacon Hill to swallow in one fell swoop.

Jack Ford McDonald Morton graduated from Boston University School of Law with an LLM in American Law in May 2022.  He graduated from the University of Strathclyde in 2020 with an honors LLB degree in Scots and English Law.  He was named a Saint Andrews Society of the State of New York scholar to attend BU Law.