I bought a painting!

I am not a major collector by any means, but I could not pass this one up: 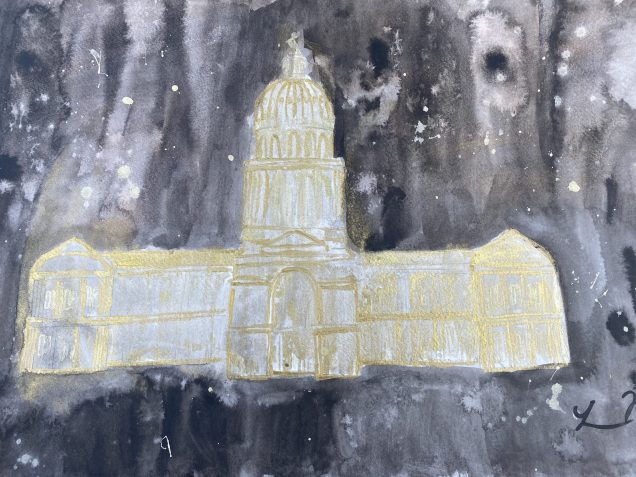 The painting, entitled “Chaos,” is by Austin Texas based artist Laura Atlas Kravitz from Lollies Follies Studio.  A lawyer, Laura works in government relations for an education organization.  She started painting as a stress relief and a way to bring the community together.  One of Laura’s ongoing themes is the Texas State Capitol and how she sees it depending on the day, time of year, and perhaps most importantly, what is going on at the time.

The Texas State Capitol was constructed between 1882 and 1888 and has been a National Historic Landmark in 1986. The Capitol is located on a hilltop overlooking downtown Austin and is an example of Italian Renaissance Revival style. Although it is taller

than the US Capitol, it is only the sixth tallest state capitol, so there is at least one thing that isn’t bigger in Texas! Then again, the Capitol has almost 400 rooms and at 360,000 square feet of floor space, it is the largest state capitol in the United States.

The building has a pink hue because it is constructed of local sunset red granite. When the building was dedicated there was a weeklong celebration that included cattle roping, baseball games, singing groups, and fireworks. Some attendees purchased pieces of red granite as souvenirs. 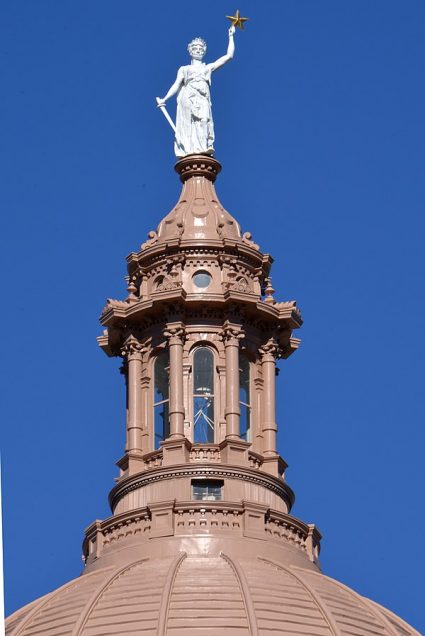 The Capitol is topped with the statue Goddess of Liberty, a sculpture by Elijah E. Myers. In 1986, the original sculpture was replaced by a replica and the restored original is now in the The Bullock Texas State History Museum.

So why did I like this painting so much?

Anyone who has worked in Congress or a legislature knows the emotion that this painting evokes. Most of Laura’s other paintings of the Capitol (available on Etsy) are light, some with many colors. Here the Capitol is surrounded by darkness. This, however, is not the darkness of a clear Texas night where the Goddess of Liberty generously adds a star to the firmament. This is a gloomy, yet swirling, darkness that at once uproots the Capitol from its Austin hilltop but also weighs the Capitol down. The darkness churns, not from winds or storm, but from uncertainty.

Laura tells me she painted “Chaos” a few days into the Legislature’s Second Special Session –a very chaotic time. A group of House Democrats had decamped to Washington DC in an attempt to stop what they saw as an odious bill that would have restricted voting rights. In return, Governor Greg Abbot, in a cruel-yet predictable-move, vetoed funding for the legislature and its 2,100 employees. That is fine for the legislators themselves, who are paid very little for their service and stand for election for reasons other than financial gain. It was obnoxious, however, to threaten the legislative staff—the people who keep the Capitol clean, the ones who answer telephone calls from constituents, the legal and policy staff who draft and redraft the bills to be debated. This year, they were working special session after special session. Staff work long unpredictable hours with tremendous stress. Further, legislative staff, especially lawyers, are typically paid far less than what they could make in other jobs. In large part, they do their job out of a sense of public service. To threaten the staff and their families with no pay was unconscionable.

Some will blame the missing Democrats for the chaos. I generally believe that when someone is honored by their constituents to represent their community they have an obligation to be there. If you are going to break quorum, however, it should be over something vitally important—like protecting the voting rights of the powerless and underrepresented. The Republicans pushing these voting rules might point out that they control the Legislature and under our system the majority rules. True. Still, in a Constitutional system, the will of the majority is tempered–and sometimes thwarted–by the God-given rights of the minority. Efforts to protect someone’s ability to vote, which is referred to as a right in the US Constitution no less than five times, is–or should be–an example of when extraordinary measures are required.

I really like that Laura used gold to define the Capitol rather than another color—especially the pink of the actual granite. Gold is not just valuable, but precious. Legislatures, both as an institution and as a concept, are precious as well–even in difficult, chaotic times. People peacefully debating to work out their differences and create policy for the greater good may be the most valuable thing ever devised by society. In this painting the gold is swirling off the building and into the gloom. Unlike red granite, gold is malleable and soft. It is easily molded into something beautiful; but items made of gold can just as easily be scratched, chipped away, or destroyed.

In times of chaos, the legislature can suffer—both in its reputation held by the people outside the building and in the faith and enthusiasm of the people within. Luckily, when the legislative body returns to normal and functions as it should, the precious gold luster can be both restored and augmented—in preparation for the next storm of chaos.

I will end my amateur art analysis by noting that the gloom in Laura’s painting is not total–there are spots of light in the dark.  Looking at the painting the light spots are amidst splotches that could have been caused by drops of sweat–or tears. Still, hope hides just beyond the chaos.  The British poet Alfred Noyes wrote The Road Through Chaos, which begins:

There is one road, one only, to the Light:
A narrow way, but Freedom walks therein;
A straight, firm road through Chaos and old Night,
And all these wandering Jack-o-Lents of Sin.

It is the road of Law, where Pilate stays
To hear, at last, the answer to his cry;
And mighty sages, groping through their maze
Of eager questions, hear a child reply.

I have commissioned Laura for another painting of the Capitol on the theme of “Sine Die” when the session finally, mercifully comes to an end and the legislative business, for better or worse, concludes.

I can’t wait to see what she comes up with.

n.b.  All opinions in this article are mine alone and do not reflect those of the artist.