The American Family Act is both Effective Policy and Politically Viable, Let’s Make it Law

With the 2020 Democratic Primary underway, candidates are engaged in a ‘race to the left’ defined by progressive proposals for expansive federal programs aimed to combat social, economic, and environmental injustices. Underpinning these ideas is the belief in government as an effective mechanism for improving the lives of Americans and a strong rebuke of the Republican tenants that small government, deregulation, and tax cuts are the appropriate tools to lift up the impoverished, marginalized and economically struggling.

The American Family Act of 2019 (AFA) seems to be another progressive policy with noble aims, but dim prospects for bipartisan support. Most recently introduced in March 2019 by co-sponsors Senator Michael Bennet (D-CO) and Senator Sherrod Brown (D-OH), the AFA aims to reconfigure and expand the Child Tax Credit (CTC) to more effectively combat childhood poverty by increasing the financial support and removing the implicit work requirement. However, upon closer examination of its tax-focused policy structure and pro-family political implications, the AFA is distinct from other progressive Democratic proposals because it has the ability to transcend the traditional divisiveness surrounding social welfare legislation. Thus, if framed correctly and advocated for effectively, the AFA is an endangered species in today’s gridlocked and sharply divided Congress: a sweeping progressive policy with political viability.

Enacted in 1997, and expanded since with broad bipartisan support, the CTC is an anti-poverty measure that aims to mitigate the costs of raising children through a tax deduction of up to $2,000 per year for each eligible child. The CTC is administered primarily through a non-refundable tax credit, where a family’s income tax liability is reduced by the credit value. Families without taxable income—or whose taxes are below the credit value—are excluded from taking full advantage of the credit. The CTC partially accounts for this with a refundable option for these families. However, eligibility is still subject to a taxable earnings requirement of $2500. Furthermore, refundable credits are capped at 15% of taxable income and $1400 annually. These limitations exclude the poorest and most vulnerable children from the benefit. Roughly 27 million children under seventeen are ineligible for the full credit and many don’t qualify at all. Despite its shortcomings, the CTC functions as an effective tool for alleviating child poverty, lifting one in six previously poor children and their families out of poverty each year.

Building on the existing CTC, the AFA aims to increase its impact through five major revisions. First, it creates an expanded credit for children under six (YCTC) of $300/month ($3,600/year). Second, the AFA increases the credit for children seven though sixteen to $250/month ($3,000/year). Third, the AFA returns the upper income eligibility to pre-Trump tax levels, with phase-out beginning at $75,000 for single and $110,000 for married families. This concentrates the benefit on the poor and increasingly strapped middle-class. Fourth, and most importantly for reducing rates of childhood poverty, both credits are fully refundable, eliminating the implicit work requirement. Finally, the AFA introduces a monthly advance to “smooth families’ incomes and spending levels over the course of a year,” while preserving the fundamental structure as a refundable tax credit. 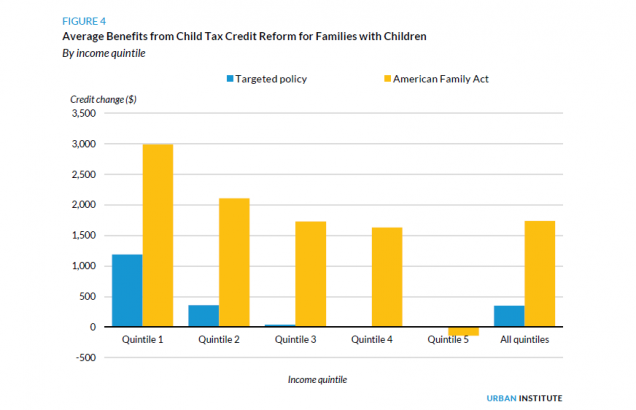 Policy analysts predict the AFA would have powerful and lasting effects on reducing childhood poverty. A report by the Columbia Population Research Center found the AFA would reduce child poverty by 38 percent, and the duel-impact of increasing the credit and eliminating the earnings requirement would move approximately 4 million children out of poverty and 1.6 million out of deep poverty. In 2015 Congress—in a bipartisan action—commissioned a group of experts to produce “a nonpartisan, evidence-based report that would provide its assessment of the most effective means for reducing child poverty by half in the next 10 years.” The report found the most impactful programs involve cash assistance to families, and noted the most effective policy for poverty reduction would be a $2,700 unrestricted child allowance, which the authors report, would alone cut child poverty by a third. Cash subsidies to low income families are also credited for increasing investment in early child development, which links to better learning outcomes and future earning potential. Thus, the AFA implements evidence-based policy for combatting child poverty and promoting broader social and economic benefits for its beneficiaries.

While much of these same benefits could be realized in other progressive policies (such as Universal Basic Income and Universal Childcare), theses government programs require strong Democratic congressional majorities. A closer examination of the political landscape surrounding tax credits and unpaid domestic labor reveals the critical ways the AFA’s form and function can attract Republican support.

To understand the bipartisan potential, we must discuss why many conservatives traditionally support the CTC. Structured fundamentally as a tax credit, the CTC can be framed as a reduction of the federal government. The CTC is more palatable than other anti-poverty initiatives because it bypasses the need for a government program with an expansive bureaucratic administration and a redistributive tax for funding. While this framework is somewhat undermined by the (partially and conditionally) refundable nature, still the CTC addresses the widely supported issue of reducing childhood poverty through an initiative that shrinks the size of the federal government by taking in less tax revenue and not offering a new administrative service. Bennet’s description of the plan demonstrates his awareness of this political tightrope. In the AFA announcement he described it as a tax cut and credit, not a benefit or allowance. When questioned on his word choice he told reporters “I think you could describe it either way.”

Republicans can also frame the CTC and the AFA expansion as pro-family. Conservatives often decry the traditional family structure is under assault and argue programs like the childcare tax credit and proposals like universal childcare structurally nudge stay-at-home parents into the workforce by discounting their unpaid domestic labor. The AFA expansion gives parity in treatment of working and stay-at-home parents. The AFA’s significant credit increase could be framed as offering a simplified and neutrally applied childcare subsidy in lieu of other universal childcare proposals, which commentators on both sides of the debate have described as disadvantaging stay-at-home parents. The Niskanen Center, a center-right think tank, supports expanding the CTC in much the same way the AFA does. It argues the increased credit should unite the left and right through its anti-poverty, pro-family message and impact. It asserts that neutral funds promote individual choice by giving parents the decision-making power to use funds to “help pay for child care for two-parent working families, or help a stay-at-home parent or a grandparent afford necessities such as diapers, transportation, access to the Internet, or educational materials for a child.” The Niskanen Center is not alone on the political right. During his campaign, Donald Trump’s Childcare Plan included a neutrally applied childcare deduction, “offering compensation for the job [stay-at-home parents are] already doing, and allowing them to choose the child care scenario that’s in their best interest.” Further demonstrating the bipartisan nature of the fundamental concept and policy, Trump’s December 2017 tax plan expanded the annual CTC credit from $1000-$2000 dollars and modestly lowered the taxable income requirement.

The AFA should pass because it is good data-backed policy, but unfortunately that is not enough. It is the policy’s structure rooted in the tax code, implications supporting stay-at-home-parents, and foundation in a popular bipartisan program that give the AFA an opportunity transcend partisan gridlock and pass through congress.

Rebecca Gottesdiener anticipates graduating from Boston University School of Law in May 2020.