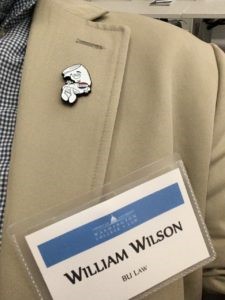 Brynn Felix on the International Conference on Legislation and Law Reform

Last week I had the privilege of once again attending the International Conference on Legislation and Law Reform, held at the Washington College of Law at American University. I had attended last year’s conference along with several other alumni from BU’s Legislative Policy & Drafting Clinic; you can read that blog entry here. This time around I had the honor of participating in the conference as a panelist!

Several old favorites returned as speakers, such as the inimitable Judy Schneider, although the conference also featured a number of new panels.

Judy, a legislative expert at Congressional Research Service who co-authored the Congressional Deskbook, captivated the audience with her witty rendition of how Congress really works. Judy runs a boot camp for each new class of U.S. Representatives on congressional procedure. She shared with us the magic formula for passing bills that she gives to incoming members of Congress: You need the policy; you need the politics (though this is not to be confused with party politics); and you need the procedure. She went on to explain that most of us learned civics incorrectly—Congress was not created to pass laws, but rather “to prevent bad laws from being enacted”—then walked us through each chambers’ political and procedural hurdles in committee and on the floor.

I also really enjoyed a panel on Outside Drafters, which was new to the conference this year. The panelists were Rochelle Woodard, from the Department of Commerce, and Ronald Lampard, the Criminal Justice Task Force Director at the American Legislative Exchange Council. Both brought fascinating perspectives on drafting language for lawmakers, although neither worked within the legislative branch. Rochelle spoke of the challenges she faces as an agent of the executive branch whose job is to implement treaties and consult on export control, and discussed how she goes about balancing these responsibilities with drafting language for Congress that Legislative Counsel will inevitably review and revise. Ronald, by contrast, works for a national advocacy organization that drafts both model legislation and state-specific legislation for lawmakers. With respect to the latter, he emphasized the need for local buy-in and how he approaches collaborative drafting with stakeholders.

I had the great honor of participating in the last panel of the conference, Teaching Legislative Drafting, with my clinic professor, Sean Kealy. Professor Lou Rulli, who runs the Legislative Clinic at Penn Law, was also on the panel with one of his former students. Both professors spoke of the importance of teaching legislative drafting to law students and discussed their respective curricula. I talked about the bill that I drafted when I was a member of BU’s Legislative Policy & Drafting Clinic. My client was a State Senator who asked me to draft a bill from scratch, aimed at mitigating collateral consequences to incarceration in Massachusetts. I had a great time sharing my experiences as a student in the clinic and how the skills that I learned have come in handy during my externship with the Senate HELP Committee.

While there were far too many fabulous panels to highlight here, I would be remiss if I failed to mention the international nature of the conference. Half of the panels were dedicated to legislative issues that drafters in other jurisdictions face. I heard from drafters from Ghana, Ethiopia, China, the EU, and members of the Commonwealth Association of Legislative Counsel. They spoke on topics ranging from telecom regulations in Uganda to public participation in the legislative process in Korea to promoting drafting uniformity in Australia.

If you are interested in gaining insight into the intersection of policy, drafting, and law reform, this annual conference is not to be missed! For information about future conferences, visit http://www.ilegis.org/.