Georgia gained national attention in the 2020 election when the predominantly red state broke its 24-year streak of voting for Republican candidates in U.S. Presidential Elections. It went on to make history in early 2021 when the electorate flipped the U.S. Senate and elected Rev. Raphael Warnock and Jon Ossoff to the U.S. Senate, respectively the first Black and Jewish Senators from Georgia. 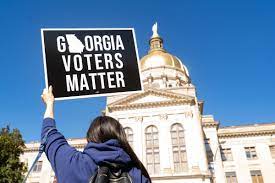 A large part of this victory both in the White House and the Senate is attributed to Stacey Abrams, the Democrat gubernatorial candidate in Georgia’s 2018 election. Abrams’ gubernatorial campaign was unsuccessful, in large part because of voter suppression, but rather than wallow in defeat and fade into the background, Abrams became a loud, powerful voice—speaking against voter suppression and registering hundreds of thousands of voters in Georgia.

And now Republicans—in Georgia and across the nation—formally responded, pushing a huge new wave of voter suppression tactics in the name of “election integrity.”

Among other legislation, Republicans in the Georgia Senate have proposed S.B. 71, which would change the definition of absentee voter entirely. For the past 15 years or so, Georgia has been a “no excuse needed” absentee voting state, but this bill would require people who wish to vote absentee to

These extremely limited exceptions would put even more emphasis on the luxury and privilege of time. Many people cannot take an hour (or more) out of their daily schedules—balancing child care, housing matters, and work among the other minutiae of modern life—to go to the polls. The oft-used argument to that is “well, there are plenty of precincts where you can get in and out in 10 minutes.” And while that may be accurate, the problem is inherent in the argument itself: that it isn’t true of every precinct; and issues with fewer voting machines, voter purges, and, therefore, long waits tend to disproportionately affect liberal-voting communities in Republican controlled states. 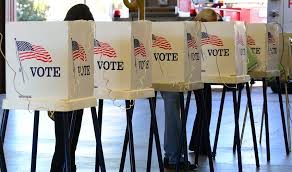 In Georgia, it seems like the Republicans are worried they are seeing the writing on the wall after the voter turnout in the 2020 Presidential and Senatorial elections. Though not an overwhelming victory in any of the elections, the Democrats mustered enough of a majority to win, and with continued growth in urban areas and a push for even more change in the future, it’s incredibly likely that Georgia will continue to vote blue in the future. The state has been trending that way for years, and the 2020 election could well portend what is in store for conservatives in Georgia.

Georgia is not alone in limiting absentee voting. Nine other states have proposed bills that would either eliminate “no excuse” voting or crack down on the requirements for absentee voting where “excuse” voting is already in place. Other bills make it more difficult to obtain ballots in the first place by changing the laws concerning permanent early voter lists. Some measures go so far as to eliminate permanent early voter lists (which would force people now on those lists to take more steps to vote every year; Arizona S.B. 1678, Hawaii H.B. 1262, and New Jersey S.B. 3391) while others would reduce how long someone remains on the permanent absentee voter list (Florida S.B. 90).

Other proposals concern stricter voter ID requirements—a long contentious aspect of voter suppression. States that do not currently require photo IDs to vote are considering requiring them in the future, other states are trying to restrict what kinds of photo IDs can be used (New Hampshire H.B. 429, Mississippi H.B. 543), and some would force voters to include a photocopy of their ID with their absentee ballots (Texas S.B. 1). Requiring voter ID (and particularly certain types of ID) is problematic because there are not enough opportunities for people to obtain IDs—lunch hour spent at the DMV, anyone?—and cost barriers make obtaining an ID unfeasible for many disenfranchised populations. This also ties in with the legislative efforts to reduce voter registration opportunities, whether that be election day registration or limiting or reducing automatic voter registration.

Lastly, some state legislatures have decided that amplifying voter purge practices is the way forward. The practice is already flawed (and usually ineffective and unnecessary), but the proposed legislation would expand the scale of extant purges or adopt procedures that would likely result in improper purges. Texas legislators have sent a bill to the governor that would add new criminal penalties to voting processes, enhance partisan poll-watching, and ban measures previously enacted to increase access to voting. New Hampshire has gone so far as to propose a bill that would violate the National Voter Registration Act.

Staying on our toes

Although some legislation has been proposed to expand access to voting, the backlash and restrictions are what anyone concerned with protecting the right to vote should be worried about. The proposed restrictions on voting would remove people from voter rolls, make it harder to vote in person by heightening ID requirements, erect further barriers to obtaining IDs, severely limit who can vote absentee, and add arbitrary hurdles to voting by mail generally. The individual right to vote is integral to securing and maintaining American democracy, and efforts to build barriers that would make it nearly impossible for American citizens to vote are plainly wrong. Preventing voter fraud is important, but using rhetoric about “election integrity” to justify disenfranchising certain populations is classist, racist, and morally repugnant, and that is without touching the constitutional and legal issues surrounding the matter. Already, the Democrat-controlled U.S. Congress is taking steps to prevent the voter suppression promulgated by this wave of state legislation. What Republicans who are worried about votes in the hands of marginalized communities do not realize is that it isn’t a matter of barriers and restrictive legislation, it’s a matter of time. Georgia was one of the first dominoes to fall, but it won’t be the last, especially with the federal government ready and willing to strengthen voting rights and access.

Amelia Melas anticipates graduating from Boston University School of Law in May 2022.