Time To Bring Back Happy Hour To Massachusetts?

This session the Massachusetts Legislature considered “An Act restoring happy hour to the commonwealth” SB.169 at the request of a group of Boston College Law School students. The bill would allow restaurants and bars to discount alcoholic beverages during specified times if drink prices are not changed during the happy hour; the happy hour does not take place after 10 pm; and notice of the happy hour is posted on the premises or website at least three days in advance. 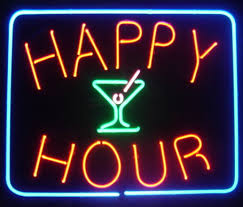 Massachusetts banned happy hour in 1984 as part of a national effort to combat drunk driving.  Earlier that year President Reagan signed the National Minimum Drinking Age Act of 1984 (23 U.S.C. § 158), which cut federal highway funds to states with drinking ages under 21. In 1985 there were 18,125 alcohol impaired crash fatalities, representing 41% of total traffic deaths in the country. At the behest of groups such as Mothers Against Drunk Driving, Massachusetts joined several other states to restrict happy hours. Today, Massachusetts is one of eight U.S. states that still ban happy hours along with Alaska, Indiana, North Carolina, Oklahoma, Rhode Island, Utah, and Vermont.

The 38-year effort against drunk driving has had a significant effect: by 2019 there were 10,142 drunk driving fatalities representing 28% of total traffic deaths. Today, AAA ranks Massachusetts first among all states for having the least severe drunk driving problem.  However, it is unclear that happy hour restrictions contributed to this downward trend.  For example, in 2015 Illinois legalized happy hours after a 26 year ban. According to Department of Transportation data, during 2014, the last year that happy hour was outlawed in Illinois, there were 353 alcohol-related traffic deaths—38% of all traffic fatalities.  In 2019 there were 368 alcohol-related traffic deaths—36% of traffic fatalities. It appears doing away with the happy hour ban had little to no effect on alcohol impaired traffic deaths in the state. Other drunk driving measures such as the 21 year-old minimum drinking age, strict enforcement of drunk driving laws, and changing youth attitudes and behaviors surrounding drunk driving have played the largest role in the reduction in traffic deaths nationally.  Still, a 2014 study found that college students greatly increased alcohol consumption during promotions and happy hours that decreased overall prices. 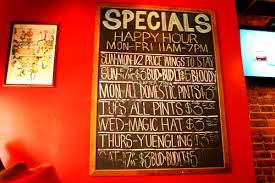 An additional factor is that driving options have changed greatly since 1984.  Today, ride share companies such as Uber and Lyft are now a popular and convenient way to get around after a night on the town.  Since ride shares are fairly inexpensive during off-peak hours, it is more likely that people who had too much to drink would call an Uber rather than driving after happy hour ends. Additionally, parking in Boston is tedious and expensive at best. Finding parking in Boston reasonably close to a bar or restaurant—or reasonably priced—takes near herculean effort. Ride shares are often a more convenient and better economic option.

The bill’s findings and purposes section lists both the law’s ineffectiveness and economic factors for lifting the ban. The bill claims restoring happy hour “will support local businesses, shift patronage of bars and restaurants toward low-density hours, and benefit the public morale.”

Indeed, offering happy hour specials could help restaurants and bars boost sales during off-peak hours. In the time of Covid-19, these discounts and specials could mitigate the losses suffered during the pandemic.  Joshua Lewin, a co-owner of a restaurant in Somerville and Boston argued that in the time of Covid happy hours bring in patrons during slow times of the day. Happy hours spread out the times in which people go to the restaurants as allow social distancing measures.

The proposal is also popular; a recent MassINC poll found 70% of people approved lifting the happy hour ban with only 9% strongly opposed.  In addition, Mothers Against Drunk Driving (“MADD”), one of the strongest proponents for prohibiting happy hours, does not currently have an official stance on lifting the ban due to the advent of ride shares as a safeguards against drunk driving.

Allowing happy hours, however, faces significant opposition.  Massachusetts Governor Charlie Baker is skeptical about the bill stating, “That law did not come about by accident. It came about because there was a sustained series of tragedies that involved both young and older people, in some terrible highway incidents, all of which track back to people who’d been over-served as a result of happy hours in a variety of places… I’d be hard-pressed to support changing it.”

While drunk driving and binge drinking are still a concern, drunk driving incidents have been on the decline over the last twenty years. Evidence suggests the Massachusetts prohibition of happy hour is outdated and ineffective for decreasing drunk driving. The Commonwealth should refocus its efforts to curb drunk driving through increased education and outreach programs along with tighter enforcement across the Commonwealth. Further, the Legislature should support legislation that will aid local business in any way that is practical; happy hours would give bars and restaurants a boost while helping to manage the flow of customers.

At any rate, the bill seems to be done for the session.  The committee on Consumer Protection and Professional Licensure held a hearing on August 30, 2021, and in January 2022 sent the bill to a study order.  Perhaps bars and restaurants will get some relief next year.

Dane White anticipates graduating from Boston University School of Law in May 2023.

Ryan Platt anticipates graduating from Boston University School of Law in May 2023.