On March 12, 2021, a bipartisan coalition of Senators reintroduced the Sunshine Protection Act, a bill that would make daylight saving time permanent across the country. Leading sponsors include Ed Markey (D-Mass.) and Marco Rubio (R-Fla.). This legislation would not only eradicate the disruption created by changing our clocks twice a year, but would also result in more afternoon and evening daylight for everyone around the country. This is not the first attempt to make daylight saving time permanent; bills to end the time changes have been introduced in Congress and in state legislatures with little success. A similar bill was introduced in the Senate in 2019. In 2019 and 2020, thirty-two states, including Massachusetts, proposed legislation to make daylight savings permanent.

Daylight Saving in the United States

Daylight saving was instituted in America during World War I. Germany became the first country to institute the change in 1916 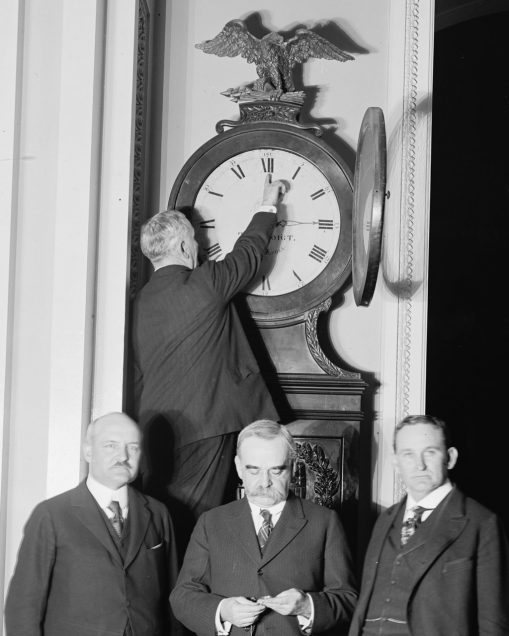 Ohio Clock in the U.S. Capitol being turned forward for the first U.S. daylight saving time on March 31, 1918.

as a way to conserve fuel. England and America followed shortly after in 1918, believing that more daylight during the workday would reduce coal usage and thus save energy. Evidence that it saves energy is slim, however, as lighting has become increasing energy efficient.

President Woodrow Wilson wanted to keep daylight savings after the war ended, but anecdotally received pushback from farmers who would lose an extra hour of light in the morning. The darker mornings made it more difficult for them to get their products to market, and often negatively affected their livestock. It was eventually abolished, but then reinstated by President Roosevelt during World War II.

Let the Sunshine in

The time has come to make daylight saving permanent. Changing our clocks twice a year causes unnecessary stress and confusion, and losing valuable daylight in the dreary winter months is an unwelcome side effect.

First, research has shown that changing our clocks in the fall contributes to an increase in Seasonal Affective Disorder among the population. Scientists believe that shorter days and reduced sunlight in the winter trigger biochemical changes in the brain. Many have even suggested light therapy (exposure to a light box that simulates high-intensity sunlight) as treatment for depressive disorders. The effects of darkness on our mental health have only been worsened by the COVID-19 pandemic. Many people who found solace in evening walks, exercising, or general outdoor time lost those outlets and motivation when they lost daylight in November. Making daylight saving permanent would improve our mental health by increasing opportunities to get sunlight every day, and by providing more time for healthy outdoor activities. 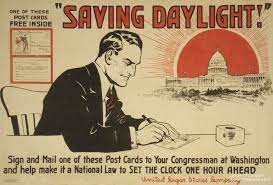 Second, eliminating time changes would have a number of other health and safety benefits. Aligning daylight with workers’ standard hours would increase visibility during busy driving times, helping prevent crashes. Additionally, research has shown that the number of car crashes spike in the week following the spring time change. Abolishing the change would eliminate the stress and confusion that accompanies sudden changes to work schedules. Furthermore, making daylight saving permanent would shift busy driving hours away from certain animals’ nocturnal hours, thereby reducing vehicle collisions with wildlife. Research has also suggested that transitions in and out of daylight saving time disrupt circadian rhythms and lead to increased risk for heart attacks and strokes. More daylight in the evenings also reduces your risk of being the victim of a robbery.

Having more daylight in the afternoons would inevitably mean less daylight in the mornings. But with the increasing opportunities for remote work and school, this may not be as big of a problem for many.

Some businesses are also not fond of the idea. Television networks dislike the extra sunlight because ratings suffer during daylight savings due to people spending more time outside, especially during important time slots like the 8 p.m. hour. However, other prominent industries like airlines and Amtrak, prefer one permanent time because changing clocks causes major scheduling problems, especially when coordinating international travel. 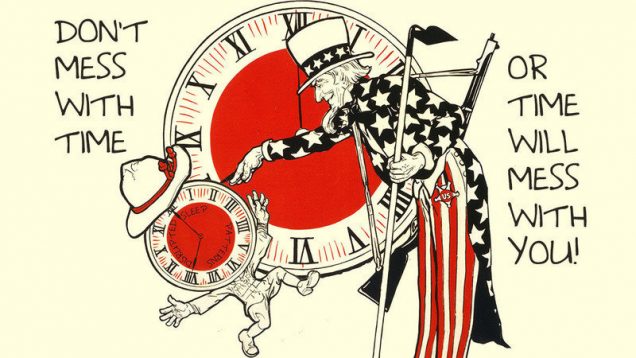 Additionally, a change like this might be too difficult for a state to make independently, which heightens the importance of this federal bill. For example, Massachusetts ultimately decided that it could not make the change alone; it would need other northeastern states to join in order to avoid large disruptions to travel and broadcast schedules. A uniform federal bill would solve many of the problems that state legislators encounter when trying to make daylight savings permanent in their states.

As the COVID-19 pandemic confined people to their homes and away from others, many began to value their time spent outside as much needed entertainment and relaxation. When we turned our clocks back in November and lost precious daylight, the effects of being stuck inside became even more prominent. The Sunshine Protection Act  is being reintroduced at an important time, considering this will likely not be the last pandemic we see in our lifetimes. Congress should recognize the harm that this outdated tradition causes, and finally agree to let the sunshine in.

Alina Cathcart anticipates graduating from Boston University School of Law in May 2022.