“One of the most powerful things we can do to create a better Commonwealth and a better world is protect the health and safety of, and empower, women and girls.”

A win for the health, safety, and empowerment of women and girls, the Massachusetts Legislature criminalized female Genital mutilation. The Legislature, however, has more work to do in this area.

Female Genital Mutilation (FGM) involves the partial or total removal of external female genitalia — or other female genital organs — for non-medical reasons. 200 million women and girls alive today worldwide have been subject to the practice despite proof that it has no health benefits. On the contrary, FGM is known to cause a number of medical issues including severe bleeding, psychological trauma, problems with urination, cysts, infections, complications during childbirth, and increased risks of newborn deaths. FGM cases are thought to be mostly concentrated in countries in Africa, the Middle East, and Asia. But, this does not mean American women and girls are not at risk: FGM is a cultural phenomenon, not a geographical one. 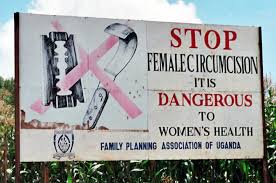 Mariya Taher — a Cambridge, Massachusetts resident — grew up in a Dawoodi Bohra community,  a religious denomination within the Ismaili branch of Shia Islam. Growing up, she was told FGM was a sensitive topic — one only women could discuss. She thought it was normal, and knew she was not supposed to mention it outside of her community. Mariya underwent a proceedure called khatna at age seven.

In high school, Mariya connected the dots and realized that khatna was FGM. She soon came to the sad and shocking realization that her endeared religious and cultural practice perpetrated violence against her and other women and girls in her community. FGM is strongly condemned by most Muslim communities, but members of the insular Dawoodi Bohra community revere female genital cutting as a religious obligation to remove “forbidden flesh” from young girls.

Another woman, who asked that her full name not be revealed, told a similar story. “Jennifer” is a Kentucky resident from a minority Christian community. Her parents forced her to undergo FGM at age 5. Jennifer was told she was never allowed to talk about what happened to her. Still, after many years of enduring pain in secrecy, she went public with her story at age 40. This prompted anti-FGM campaigners to investigate the secretive practice in conservative evangelical  communities and minority Jewish communities.

The testimonies of survivors like Mariya and “Jennifer” helped spark important discourse around FGM and propel legislation forward.

FGM is recognized by the federal government as a form of child abuse, and internationally as a human rights violation, torture, and violence against women and girls. With the passage of the federal ban in 1966, the Female Genital Mutilation Act, performing FGM on anyone under age 18 became a felony in the United States. However, in 2018, US federal district judge Bernard A. Friedman in Michigan ruled that the federal government did not have the authority to enact legislation outside the commerce clause and held the act unconstitutional. As part of the ruling, Judge Friedman also ordered that charges be dropped against 8 people who had performed FGM on 9 girls. Some considered the ruling a blow to girls at risk, and feared that the 23 states that did not have anti-FGM laws would become “destination states” for FGM.

Almost two years later, on August 6th, 2020, Massachusetts Governor Charlie Baker signed Bill H4606 “An Act Relative to the Penalties for the crime of Female Genital Mutilation” into law. The Massachusetts State Senate unanimously passed the legislation, which officially criminalizes the practice of FGM in Massachusetts. Under the new law, any person who knowingly commits FGM on a minor — or transports the minor within or outside the state for these purposes — will face up to five years in state prison, or a fine of up to $10,000. Additionally, the law specifies that the public health commissioner must work with the government and non-governmental organizations to set up an educational FGM prevention program, protect and assist victims, and create recommendations for training health care providers on how to recognize risk factors of FGM.

Most state anti-FGM laws, including Massachusetts’ law, only apply to minors (including only those under age 16 in Colorado, and under age 17 in Missouri). The only states that prosecute offenders for performing FGM of women above the age of 18 are Illinois, Minnesota, Oklahoma, Rhode Island, and Tennessee.

Massachusetts’ law is a step in the right direction, but leaves room for further action.

The law recognizes FGM as child abuse and gender-based violence, while recognizing the importance of education and prevention. It also strikes a delicate balance between the law, morality, and culture, without addressing that balance in the bill. It is important to note that although one major justification for the practice of FGM is religious duty, FGM is really a cultural practice. Though practiced by Christians, Jews, Muslims, and indigenous religions around the world, none of these religions require the practice, and have instead condemned it. Still, communities that practice FGM hope to preserve their customs and cultural identity by continuing the practice. At the same time, Massachusetts seeks to protect vulnerable populations — specifically young girls — from the practice and punish the perpetrators.

The cultural attitudes that enforce FGM will not simply disappear because the practice has been outlawed. The Massachusetts law does not address other ways to end an unethical cultural practice such as this one. The ceremonies that accompany FGM often serve as a rite-of-passage for girls and women, and is often ritualized. FGM’s ceremonious and communal nature contribute to the difficulties associated in eradicating it. In some cultures, those performing FGM are primarily women, and are usually traditional birth attendants who inherited the role through family and revere the honor of bearing that role. Of course, Massachusetts should prioritize protecting victims and holding abusers accountable. Still, the lack of acknowledgment of the cultural differences between the lawmakers and those who practice FGM, and the lack of outreach to those communities sparks a question about whether the law will be successful in eradicating FGM in Massachusetts.

Lastly, the scope of Anti-FGM laws all over the country needs to be expanded to protect both women and girls. These laws, as they are now, leave women vulnerable to abuse since they  undergo FGM as well. Laws protecting minors and not adults reflect the perception that FGM is a child abuse issue, not a women’s health issue. In reality, it is both. Some cultures perform FGM weeks after birth; some, from ages 1 to 4; others, from ages 12-15; and others, on adult women before marriage or before the birth of a first child. We know that FGM has no basis in medical practice, no benefits, and can lead to a life of pain (both physical and psychological). Female genital mutilation is a method of abuse used to control the anatomy of women and girls. Laws across the 50 states should reflect this in a culturally competent manner that focuses on prevention, education, and both physical and psychological support for victims.

Hopefully, Massachusetts and the other 49 states can pass more comprehensive laws to offer greater protections in the near future.

Temi Omilabu anticipates graduating from Boston University School of Law in May 2021.