As I stepped off the plane and into the jet bridge, I already had my Uber app opened on my smartphone, and only a few short minutes after requesting a ride, the driver was calling me to tell say that he was outside baggage claim. This kind of convenience and ease that e-hailing companies like Uber and Lyft provide is what we have grown accustomed to as consumers.

E-hailing companies, or transportation network companies (TNCs), have made finding a ride very convenient for city dwellers and travelers alike. Whether it is one of the main players like Uber or Lyft, or one of the newer startups like Juno, Fasten, or Gett, TNCs have become an integral part of how we travel and for some of us, our everyday lives. 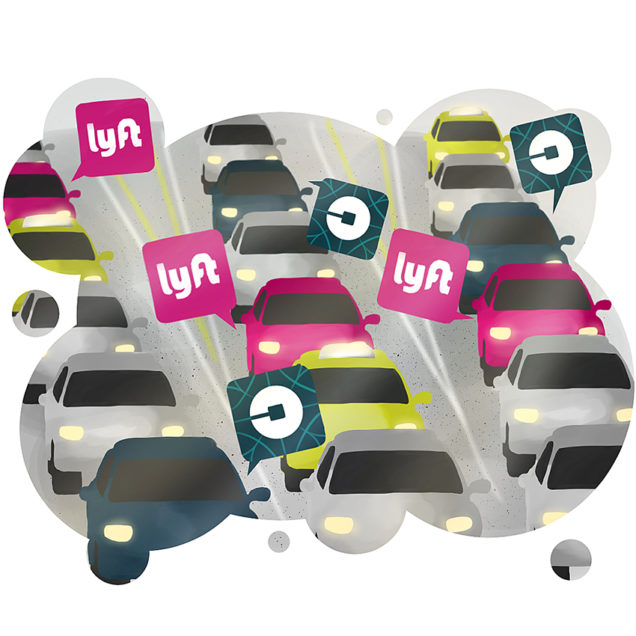 As convenient as TNCs are, legislatures across the country have made it clear that these companies will not be free from regulation. Rather, city and state legislatures have proposed legislation that will both allow TNC, but also protect riders.

In early February 2017, New Jersey Governor Chris Christie signed a new law making the Garden State the most recent of the 36 states to regulate TNCs. This new law, the Transportation Network Company Safety and Regulatory Act, which is similar to Massachusetts’s 2016 law, requires that TNC companies cover up to $1.5 million dollars in liability insurance and that drivers get background checks. However, TNC drivers are still not subject to the same fingerprinting background checks as taxi drivers. Additionally under the law, the public still does not have access to the safety records of drivers, a concession made by lawmakers in its negotiations with Uber. Municipalities are also prohibited from taxing TNC companies, promoting a more uniform single statewide regulation.

The New Jersey legislation did not come without a fight, however, with Uber demanding limits to regulations. In fact, Uber, throughout its many negotiations with city and state legislatures around the country, has consistently threatened to withdraw all of its business in the city or state at issue if the legislature does not adopt its preferred regulations. This is especially true when it comes to the fingerprinting requirement, which Uber particularly opposes. According to Uber, requiring drivers to get fingerprinted would make it harder to recruit drivers. Uber also claims that the requirement would be unfair to minority applicants, as fingerprint background checks only indicate arrests, not convictions, and false arrests are more frequent in minority neighborhoods.

Prior to the enactment of New Jersey’s statewide law, Uber had been in contentious negotiations with many New Jersey cities including Newark, the State’s largest city by population. In the end, Newark and Uber were able to come to an agreement, and Newark passed a now pre-empted ordinance where Uber would pay Newark $10 million in fees, and drivers would be required to get background checks by a nationally accredited third-party, but there would be no fingerprinting requirement.

Austin, Texas, however, had a different experience. Austin’s city council passed an ordinance requiring driver background checks with fingerprinting. Rivals Uber and Lyft joined forces and campaigned for Proposition 1, which would repeal the ordinance. The two companies spent $8 million dollars on advertising, or $200 per vote to get their message across. Yet, the campaign failed to sway voters, and Proposition 1 lost 44% to 56%. The day after the election, Uber and Lyft made good on their threat to withdraw their services from the area, leaving drivers and riders unable to use either app in the Austin area. Uber did the same to other Texas cities Midland, Corpus Christi, and Galveston, leaving because it did not agree with the local ordinances that had been passed.

Ending service so abruptly had a negative impact on riders who had become accustomed to this mode of transportation and drivers who relied on both companies for a source of income. Austin eventually set up a hotline and job fair for these suddenly out-of-work Uber and Lyft drivers. Luckily for Austin, riders and drivers were not left out in the lurch for too long, as entrepreneurs and new e-hailing companies quickly filled the void left by the two giants. Uber and Lyft left on May 9th and by the summer, there were ten companies who were set up and ready to compete. More than that, these new companies were able to get roughly 9,000 drivers to sign up and all of the companies met the August 1 deadline to have at least half of their drivers fingerprinted. All of the companies had to be in full compliance with the ordinance by February 1, 2017.

Ironically, these hard-fought battles between Uber and Lyft and America’s largest cities might all be for naught. Despite Austin’s city council’s win in keeping their city ordinance on the books, the state legislature passed, and on May 29th Governor Greg Abbott signed, a statute that pre-empted Austin’s ordinance. Since a local government only has the authority granted to it by the state, when state and local laws conflict, the local law will typically be pre-empted.  Abbott stated, “In Texas we don’t believe in heavy-handed, top-down, one-sided regulatory environm

ents that erect barriers for businesses, in Austin, Texas, we’re going to override burdensome, wrongheaded regulatory barriers that disrupt the free-enterprise system upon which Texas has been based and upon which has elevated Texas to be the No. 1 state in the entire country for doing business.”  Texas joined other states, which have increasingly preempted local ordinances. The most recent and notable example is North Carolina’s HB2 law, which pre-empted Charlotte’s anti-discrimination ordinance.

Pre-emption in regards to TNC legislation may not be so terrible, however. There is a great benefit to both the state and companies to have one standard rather than multiple municipal ordinances. With a service such as ridesharing, it is not uncommon for someone to be picked up in one town and dropped off in another. Because of this reality, it may be preferable for the states to take the lead.

New Jersey’s law shows the trend is certainly moving in the direction of state legislation, not municipal. However, now the question is will state legislatures remain strong in their positions or will they give in to what Uber and Lyft demand? As we have seen in Austin, there will always be a new company who is willing to comply with the new regulations if Uber and Lyft will not. Therefore, perhaps states should pass the ideal legislation that they feel best protects its citizens and let the market sort itself out. Uber and Lyft have a lot of negotiating power because they are the biggest players, but as we have seen, they do not have an impenetrable monopoly. As the city of Austin found out, the TNC market will not crash if Uber and Lyft leave. There are plenty of worthy “Davids” who would jump at the chance to fill the void of Goliaths Uber and Lyft, even if in the face of stricter regulation.