Within the past few months, Indiana’s Religious Freedom Restoration Act (RFRA), Senate Bill 101, has generated a lot of controversy. Governor Mike Pence signed the contentious bill into law on March 26th. This move was met with simultaneous outrage and praise. According to Time, the supporters characterize the bill as a measure to “make sure the government doesn’t impinge on the religious liberty of Hoosiers.” However, critics claim it is a thinly veiled attempt to make discrimination against the LGBTQ population based on religious belief a legal practice. Acknowledging the controversy a week later, Governor Pence signed a revision to the Religious Freedom Restoration Act, Senate Enrolled Act 50, which made it explicit that the law did not allow for discrimination based on traditionally protected classes. This post will analyze the criticisms aimed at the bill as originally signed by Governor Pence, consider whether the fix passed by the legislature addresses the critics concerns, and explore any issues that remaining in the updated legislation. 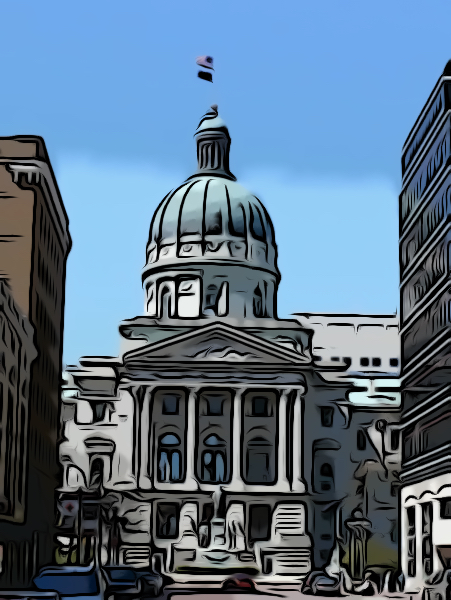 infringing on their religious beliefs. The RFRA provides that “a governmental entity may not substantially burden a person’s exercise of religion . . . .” unless government shows that the burden is “in furtherance of a compelling governmental interest” and “is the least restrictive means of furthering that compelling governmental interest.” Not so bad, right? Indiana isn’t the only state to have a RFRA. And in fact, it appears to be almost identical with the federal RFRA. However, there are several important differences between the acts, and therein lies the problem. While the substantial burden test in the two laws (furtherance of a compelling governmental interest by the least restrictive means) is identical, Indiana’s law allows “[a] person whose exercise of religion has been substantially burdened, or is likely to be substantially burdened . . . may assert the violation . . . as a claim or defense . . . regardless of whether the state or any other governmental entity is a party to the proceeding.” (Emphasis added to show a departure from the federal RFRA). Furthermore, the federal RFRA provides that a “person” may use the RFRA as a claim or defense, however, the Indiana RFRA expands that definition to include individuals, churches and religious groups, and even corporations. As Garrett Epps at The Atlantic correctly points out, this difference in language is quite significant and is at the heart of the situation that critics of the bill fear: discrimination from a store owner against… anyone.

Epps points out two cases worth mentioning: Elane Photography v. Willock and Burwell v. Hobby Lobby Stores, Inc. First, in Elane Photography, a same sex couple sued a photography company because the company only photographed traditional weddings due to the owner’s religious convictions. The photography company argued that New Mexico had enacted a RFRA which allowed them to invoke the RFRA as a defense against the claim. However, the Supreme Court of New Mexico disagreed. In what appears to be a straight forward issue in the case (the issue was treated in about one page in the majority opinion), the court held that the RFRA “was not meant to apply in suits between private litigants,” only suits where the government was a party. Indiana’s law purposefully contains language (“regardless of whether the state or any other governmental entity is a party to the proceeding”) explicitly designed to prevent the courts in Indiana from reaching a conclusion like the one reached in Elane Photography. Second, in Hobby Lobby, the Supreme Court held that for-profit closely held corporations can make use of the federal RFRA. In Indiana’s RFRA language, it is made clear that any corporation, not just a closely held one, can utilize the state’s RFRA.

After Governor Pence signed Indiana’s RFRA into law, there was a huge public backlash against the legislature and the state of Indiana. After much public pressure, the legislature passed a “fix” to the RFRA which the governor signed into law. This fix does two things. First, it makes it explicit that the RFRA is not to be used by a “provider” as a basis or as defense to “refus[ing] to offer or provide services, facilities, use of public accommodations, goods, employment, or housing to any member . . . of the general public on the basis of race, color, religion, ancestry, age, national origin, disability, sex, sexual orientation, gender identity, or United States military service. . . .” It accomplishes this feat by adding the preceding language as a section of the bill. Second, it clarifies that that “provider” includes individuals and businesses but not churches, religious organizations, or religious officials acting on in a religious function. The definition is significant because it essentially allows religious institutions to refuse to offer services based on one of the protected classes named earlier in the legislation fix. Governor Pence claims that by signing this fix, he makes it clear that he has Indiana’s best interest in mind while passing this bill and that he hopes “every person feels welcome and respected [in Indiana] . . . .” Some, like Angie’s List CEO, think that the fix “is insufficient,” while others argue that the fix goes too far and “amounts to wholesale repeal of the [RFRA].” The reality is somewhere in the middle.

Governor Pence and the Indiana’s legislature’s “fix” does address the civil rights concerns, but probably does not do enough to carry out the intended purpose of the law and is very unclear. First, if the Indiana legislature really wanted to fix the law in a way that avoids these problems, they have not only a federal model, but statutes in 19 other states (save Texas and Arkansas which suffer from similar defects as Indiana’s law) to borrow from without wading into territory that could allow; or even encourage, discrimination. Rather than amending the engrossed bill with a clause that prevents the RFRA from being used as an affirmative defense to discrimination, the state legislature should have owned up to its mistake, started from scratch, and used clearer, more moderate language.

Second, the fix still doesn’t address a fundamental logical flaw with the RFRA. While the fix does outlaw RFRA fueled discrimination per se, a private party can still use this law when sued by another private party. Removing this clause would still achieve the religious freedom that Indiana is looking to give by protecting citizens from governmental interference with their exercise of religion while also not unfairly infringing on the rights of others in the name of personal belief.

Michael Whittington is from Arlington, Texas and received his philosophy degree from the University of Texas at Arlington. He is set to graduate from Boston University School of Law with a Juris Doctor in Spring of 2016. Michael hopes to work with legislation in some capacity regardless of the path his career takes after law school.