On July 24, 2015, Senator Ted Cruz (R-Texas) brought Congress to a new low accusing Senate Majority Leader Mitch McConnell (R-Kentucky) of lying during a floor speech.  Speaking about trade treaties and the reauthorization of the Export-Import Bank, a current Tea Party boogieman, Cruz publicly discussed several private conversations with the Majority Leader at a Republican Caucus and in McConnell’s Office.

It is widely believed that McConnell agreed to attach the Export-Import reauthorization to “must-pass” legislation in order to win support from Sen. Maria Cantwell (D-Wash.) for a trade package earlier this year.   Cruz voted for the trade package because he “believes in free trade,” but was aghast that a compromise had been reached somewhere along the line that would allow the Export-Import Bank be reauthorized.

First, Cruz detailed a discussion that took place in a Republican Caucus. When Cruz asked 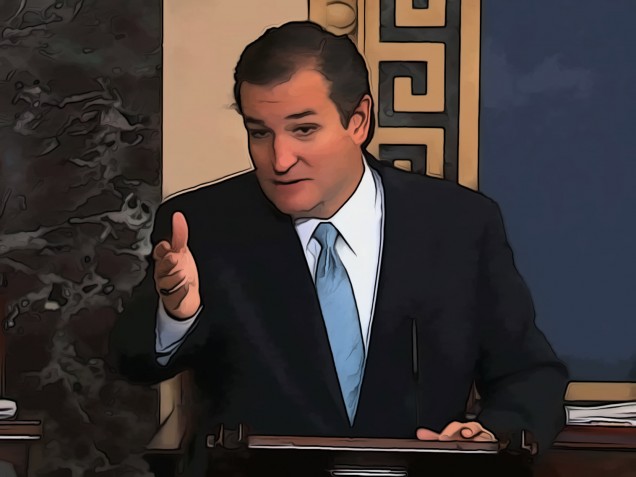 Cruz reports that after lunch his staff said that McConnell was lying, but that he believed McConnell, “What I told my staff that afternoon, I said, well I don’t know if that’s the case or not. But I don’t see how when the majority leader looks me in the eyes and makes an explicit promise… I don’t see how I cannot take him at his word.”

Later, Cruz detailed a private conversation with McConnell in his office where the Majority Leader allegedly denied there was a deal on the Bank to move the Trade Bill forward.

In the end, there was such a deal, which Cruz declared to be a “corrupt deal,” and explicitly accused the Senate Majority Leader of lying to him,  “Well, we now know that when the majority leader looks us in the eyes and makes an explicit commitment that he is willing to say things that he knows are false,” said Cruz.  “That has consequences for how this body operates,” he continued. “If you or I cannot trust what the majority leader tells us, that will have consequences on other legislation, as well as on how this institution operates.”

“Today is a sad day for this institution,” said Cruz at the beginning of his speech.  So true—but not in the way Sen. Cruz intended.

First, give up the Jesus imagery—you are not the Son of Man.  McConnell’s “betrayal” of Cruz here rises to the level of Peter denying Jesus to the crowd on Holy Thursday?  Honestly?

Second, shame on Ted Cruz for what he did to his staff.  Although I have never met them, I am willing to bet they are young, smart, and ambitious professionals who hope to have a long career either in government or working to influence the government from the private sector.  Washington is, and always will be, a small town.  It was his staff who first said the Majority Leader, one of the most powerful Republicans in the country, was lying?  They persisted despite their Boss saying he believed Mitch McConnell?  Cruz strongly implied that McConnell was lying in his speech, but the only time the word was explicitly used, it came from his staff?  Ted Cruz is not long for Washington.  He is not going to be the next President and he clearly does not want to be part of the US Senate, given his bomb throwing as opposed to crafting legislation and working to oversee the government.  His staff, however, are just starting careers in Washington, and the Republican establishment is going to have long memories.  The member-staff relationship is a sacred one—sometimes stronger than the member’s marriage.  What is said in the office is sacrosanct.  A staffer who reveals what is said (without authorization) to an outsider can, and should, be fired. The member owes the same duty to his staff.

Third, Cruz decided to make public conversations he had in a caucus—which is assumed to be confidential; as well as a private meeting with McConnell, which I am sure all parties knew was private, or Mitch would not have closed the door to his office.  Airing dirty laundry on C-Span is petulant and coarse.

Fourth, Cruz is not the first, nor will he be the last, to use a Senate seat to run for the White House; still one does not have to denigrate the former to win the latter.   Frankly, I am not sure why so many senators even want to be President.  Those senators who have tried for the White House—but lost—have discovered that the Senate can be a true font of power  and a “bully pulpit” that, over time, far outstrips the influence of a President. Thurmond, Humphrey, Goldwater, Kennedy, Dole, Hatch, McCain—they were (and in the case of the last two, still are) giants.  Each of these men was probably a far better senator after their presidential ambitions were set aside.  Incendiary comments like these demonstrate that Cruz has no interest in making the Republic a better place through a seat in the Senate. He is smart, Ivy educated, a great debater, and has been entrusted with a Senate seat by the people of Texas.  Even if he has a change of heart after his soon-to-be-failed Presidential quest, the bridges to his fellow Republicans will be burned and bridges to the Democratic Senators will never be attempted.  How sad.

Fifth, as the list above shows, this correspondent has no issue with strong points of view or personalities.  In my time, I have been condemned for difficult positions.  The Senate is enriched by strong points of view and challenging the other 99 members as legislation is crafted. In fact, Senate rules empower that minority of view and ensure that it will be heard and have a chance to influence every issue that comes through the chamber.  Courageous stands on principle make the Senate a special place— but that is not what Cruz did here.  With that immense power, comes a great measure of responsibility.  Even in the US Senate, one person cannot stop the will of a supermajority of their colleagues.  The Congress must respond to the issues of the day and do so in a reasonable amount of time.  The peculiar rules of the Senate demand civility and decorum.  Further, the Senate— and this is a difficult point for the Tea Party types to accept—requires compromise to accomplish the work of the nation.  Was there a “corrupt deal” in place when McConnell made his assurances to Cruz?  I don’t know.   I do know that the Senate Majority Leader has to manage a lot of moving parts: his caucus, the Senate as a whole, the House, the Administration, his party, not to mention his constituents back home—all at the same time.  Things change, and deals must be made to accomplish what the leader thinks is right.  The caucus chose McConnell as their leader because they felt he could do what was right for the caucus, the Senate and the country.  Circumstances change in Washington on a daily basis.  When they do, that is not the same as lying.  In addition, compromise is what grown-ups do in every facet of their lives— only children expect to get their way every time.

Finally, Cruz chose to use incendiary language on the Senate Floor.  The Constitution’s Speech or Debate Clause guarantees Cruz free speech on the Senate floor, but just because he can say something does not mean he should.  There are few things that can be said on the floor and on the record that legislators find abominable and foremost is that a colleague “lied.”  Senate rules state that no senator “in debate shall, directly or indirectly, by any form of words impute to another senator or to other senators any conduct or motive unworthy or unbecoming a senator.”  Cruz’s statement is even worse than when an Irish legislator told another to “Fuck off.”  It calls into question the Leader’s integrity—something he needs to run the Senate, and negotiate with the House and President.

Cruz made his speech and probably wanted to score a few cheap points against “the establishment” to fire up his Presidential campaign supporters.  Sadly, his words diminish a great institution.

Webster is a special correspondent for Dome.