I’ve been dreading writing this as much as I’ve been looking forward to it.

I’m thrilled to be able to share some stories and acknowledge a number of people who have meant a lot to me during my time as a part of student media at BU. On the other hand, there’s something very final about all of it. It signals the end of four amazing years on Comm. Ave., and I’m very much reminded that it’s time to enter the “real world.”

There are too many memories and folks to mention, but I’ll do my best to highlight some.

I’m proud to call Brady Gardner and Ethan Fuller not only roommates and colleagues, but also two of my best friends. From late night Mario Super Sluggers, Rocket League and ‘Ones’ in NHL 20 to bouncing article ideas off each other, heated debates about which quarterback the Patriots should draft or money in baseball, and well over 250 podcast episodes together, they’ve always been in my corner. We pushed each other to get better, and had a ton of fun at the same time.

Andrew Mason and Matt Doherty encouraged me to join the WTBU hockey beat my freshman year, and Brian Lombardo showed me the ropes and what it took to produce quality coverage for BU’s biggest teams. Even though I had little experience on a beat, Brian made me feel comfortable and confident that I could handle the responsibilities. Fellow co-directors Daniel Multz and Ethan, in addition to others like Joe Pohoryles, made it a blast heading up WTBU’s sports department.

Kevin Edelson made life incredibly easy as a beat reporter around both hockey teams, between access to players and coaches, getting credentials to games, and more. I’ll always be appreciative of his patience when I didn’t really have a clue as I started out as a freshman and sophomore. He works so hard, and has been a great resource. I always looked forward to our chats in the press box and in the hallway at Walter Brown Arena while we waited for Brian Durocher and players after Women’s practices when midweek availability was still in person.

Durocher was a beat reporter’s dream as a coach. He’s one of the nicest people on the planet, and is very easy to talk to, which was helpful for a nervous underclassman stumbling through his questions during his first press conference. Albie O’Connell was also a great guy. Few are better at attracting talent on the ice. I miss the weekly 1-on-1’s with him and Durocher during pre-pandemic times. We truly had some great access to the teams.

I also owe Brian Kelley a great deal of thanks for his help while he was still the Men’s Hockey SID before Kevin stepped into that role. When BU made the national tournament in 2021, the university’s COVID travel policy would have prevented us from getting credentials to cover the regional in Albany. I spent a couple long days on phone calls and email chains with him and others, and we made it work and were cleared to travel. He didn’t have to go through all that trouble to help us, but he did. Men’s Hockey got smoked by St. Cloud State, but it was an awesome experience nonetheless.

I was lucky enough to start off four years with a Women’s Beanpot title in 2019, their first since 1981 and first as a varsity program, in one of my first real tastes of covering games. I remember picking my head up from typing just in time to see Sammy Davis bury a one-timer from Jesse Compher to win it in overtime against Harvard, while Brian Lombardo delivered an exceptional call to my right.

The Women’s teams my freshman and sophomore year should have made a national tournament. From Davis and Compher, to in my opinion the program’s greatest goaltender in Corinne Schroeder, and some aces on the backend like Abby Cook and Regan Rust, those were some stacked teams.

Although they lost to Northeastern, calling the 2020 Women’s Beanpot final is still one the most thrilling experiences I’ve had behind the microphone.

Right up there with it is the 2020 Men’s Beanpot semifinal between BU and BC, which is by far one of the craziest Beanpot games I’ve ever seen.

Topping that list is undoubtedly this year’s Men’s Beanpot. Covering games as a photographer at TD Garden is a completely different animal as opposed to writing or broadcasting. Few things compare to the atmosphere of the Beanpot, and you’re in the thick of it as a photographer. Capturing moments like Matt Brown’s emotional celebration in the semifinals, or documenting the program’s 31st title in a nail-biting 1-0 win against Northeastern, thanks to Dylan Peterson, are some of the most rewarding memories from covering the Men’s team.

What made that Beanpot win even better was exorcising the demons from the 2020 loss to Northeastern, and finally seeing Men’s Hockey take home a trophy after a lot of ups and downs covering the team the last four seasons. There were some fun players and teams over the years that were equally as frustrating as they were entertaining. The Beanpot victory amid a dominant second semester run felt like a release valve for the senior class.

What a night that was. I’m glad I got to share that experience with Brady before we graduate.

Of course, I can’t forget about #TheBangorFour. I’ve covered games at every Hockey East arena, except for Gutterson at Vermont, and Alfond Arena in Maine takes the cake. That road trip to Orono and Bangor with Brady, Owen Gund and James Garrison was a ton of fun, and Alfond lived up to the hype.

That trip was one of many great times on the road covering BU and Hockey East, from big wins at the Mullins Center in Amherst this year, an entire day at Providence College in 2019 that ended with a raucous 8-6 loss to the Friars, some quick trips to Northeastern and BC, the 2021 Albany Regional and 2022 Worcester Regional (even though BU wasn’t in it), Red Hot Hockey at Madison Square Garden, to my last game as part of student media at the XL Center in Hartford.

I’ve been incredibly fortunate to cover and get to know some exceptional athletes during my time as a Terrier. The pandemic definitely hurt a big part of building those connections, with interviews forced to take place on Zoom or over the phone for the better part of the last two years, but we made do.

Aside from general day-to-day things like game stories, previews, and more, there were a lot of unique pieces I was pleased to put out on some remarkable people, who were willing to open up and share their stories. I caught up with Cam Crotty for over an hour about his experience transitioning to professional hockey and playing in Norway. Compher, her teammates, her brother J.T. of the Colorado Avalanche and the entire Compher family were more than willing to take time to talk to me for a feature on Jesse. Davis relived her triumphant run as a Terrier with me upon her graduation.

There was Trevor Zegras, then a kid oozing with skill, and now one of the NHL’s brightest young stars, as well as Ty Amonte, Alex Allan, Robert Mastrosimone, Julia Nearis and of course, David Farrance. Vinny Duplessis has so far had one of the most intriguing careers among BU’s goaltenders. And who could forget about Patrick Curry, a gritty role player turned clutch captain? Aside from hockey, there was Women’s Basketball assistant coach Darren Bennett, who opened up about the team and athletic department celebrating Black History Month and playing “Lift Every Voice and Sing.”

The more I think about it, the more I realize how cool it was to cover a search for a new men’s hockey head coach, which led BU to Jay Pandolfo. Only a handful of classes of student media have had that unique storyline, considering Jack Parker had the job for 40 years.

Beyond my own work, I’ve got to commend everyone I worked with around WTBU Sports.

Daniel crushed it on game broadcasts, and ran the radio show like a well-oiled machine. Ethan made us the go-to source for BU Basketball coverage without a doubt, and Hannah Yoshinaga did a great job continuing that. On the hockey beat in particular, Joe, Owen, Carolyn Mooney, and more helped make our coverage the best around over the last few seasons, in my humble opinion. James, Caroline Fernandez and Belle Fraser of the Daily Free Press and Boston Hockey Blog put out some great work of their own, and pushed our content at WTBU to continue to get better. I’m extremely proud of where we were able to take WTBU while I’ve been here.

I know WTBU Sports is in great hands with Joe and Hannah taking the reins next year as the new Directors, in addition to a bunch of returners, like Owen, ready to keep grinding and putting out good work. I’ve been beyond lucky to be part of such a great team with so many passionate and hardworking people.

Fewer places on campus offer as many different opportunities to learn and get better as we do, and that’s what helps set us apart.

After four years of seeing it all, my time with WTBU has given me memories I’ll cherish forever.

Who knows what’s next, but one thing is for sure, we’ll always have that Beanpot. 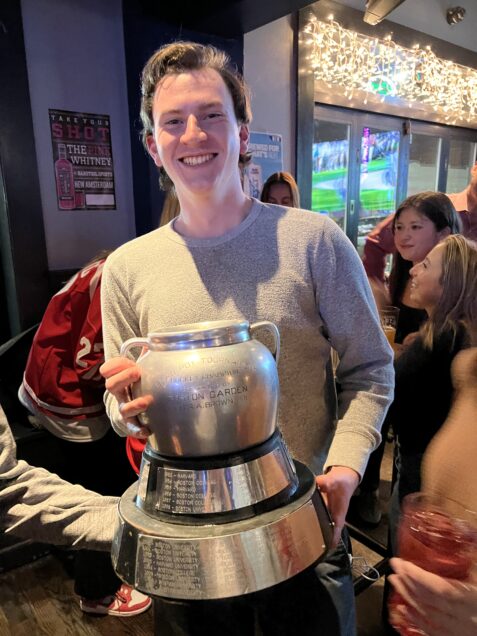