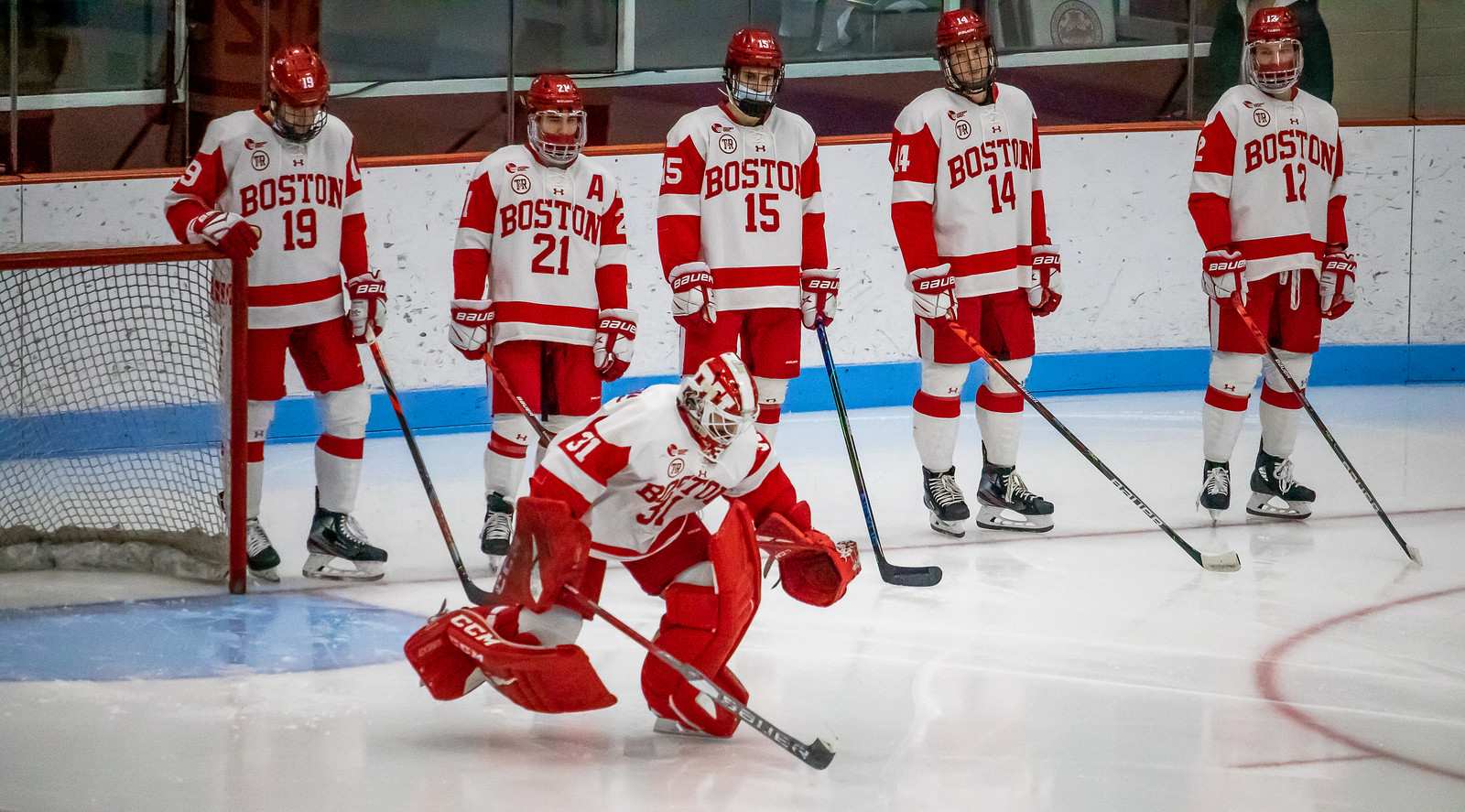 Vinny Duplessis arrived to Commonwealth Avenue as an unknown.

Starting the year as the third goaltender on the depth chart, behind blue chip freshman Drew Commesso and experienced sophomore Ashton Abel, Duplessis was not expected to make the type of impact that he has so far this year.

But incredibly, the Quebec City native has been one of BU’s most valuable players over their latest winning streak.

Duplessis has gotten off to an undefeated start to his collegiate career, going 4-0-0 with a .962 save percentage, a 1.00 goals-against average and one shutout, and helping to lead the Terriers’ surge from fifteenth to eighth in the national polls.

Despite the lack of expectations to outsiders, the freshman had to keep himself ready for his moment, if and when he would be needed.

“I didn’t know when my opportunity would come, but I had to get ready,” Duplessis said. “For me it was just battling in practice. My practices were my games.”

After Commesso went down following BU’s Jan. 23 win over Maine, Abel started in a Friday night game against No. 1/2 Boston College on Feb. 5, a 4-3 overtime loss where he made 29 saves on 34 shots. The following night, Duplessis was thrown right into the fire against the top-ranked Eagles.

Despite the tall task, Duplessis made 40 saves in a 3-1 win over BC to earn his first career win in his first start, taking home Hockey East Rookie of the Week honors.

BU head coach Albie O’Connell knew the first-year was ready to go based on what he saw before the game, which was reminiscent of his own playing days at Walter Brown Arena.

“The way he skated out before the game, like for me it was really reassuring because of how we skated up to the blue line,” O’Connell said following the win. “It was like sprinting with sort of a quick little stop. I’m like ‘Alright, this kid seems like he’s got it,’ so that was a good sign.”

“I just remember [1995-1999 BU goaltender] Michel Laroque was very similar when I was here. He kind of skated that same way out.”

The following week, Duplessis earned his first career shutout, making 18 saves in a hard-fought, 1-0 road win over Vermont. He followed that up with another solid outing against the Catamounts, stopping 16 of 17 shots with the only goal against him coming off a deflection off his own defenseman. After the strong weekend, he earned another accolade, Hockey East Defensive Player of the Week.

Most recently, Duplessis made 27 saves this past Saturday, helping the Terriers to a comeback 3-2 overtime victory on the road agaisnt a dangerous UConn squad, which currently sits in fourth place in Hockey East, scores the fifth-most goals per game in the conference (2.95) and has the second-highest shots on goal per game (33.37).

Before he was thrust into the position of starting goaltender, Duplessis knew holding himself to a consistent standard would be the key to his personal success.

“I was just staying sharp, staying ready for the moment,” he said after his first win. “Before games I didn’t play, I tried to have the same routine, and I think it paid dividends.”

Duplessis officially announced his commitment to BU back in May of 2020, coming off a season with the Whitecourt Wolverines of the Alberta Junior Hockey League in which he posted a 2.72 GAA (tenth in the league), a .912 save percentage (sixth, one spot above Abel, who was with Okotoks of the AJHL before joining BU at the winter break) as well as a 21-10-6 record with two shutouts.

In the 2019-20 playoffs, Duplessis was even better, winning four of six starts and posting a .932 save percentage and a 1.99 GAA before the pandemic cut things short.

With Duplessis’ heavy workload of the past few seasons, O’Connell thinks the experience has certainly helped the young netminder along.

“He’s a 21-year-old freshman, so he’s played a lot of junior hockey,” O’Connell said after the BC win. “He’s had to carry a team, carry teams in playoffs. So he’s been in some pressure situations, and he’s had some good nights and bad nights on the bus.”

With the crease up for grabs at the beginning of the season, O’Connell did not guarantee anything to either of his three netminders, except the chance to compete for the job every day in practice.

“Every guy has an opportunity every day to show what he can do,” O’Connell said after the UConn win. “Especially at that position, you don’t want to just give the guy the reins. He’s got to compete and fight for it.”

“[Vinny] is confident, and he wants to win. He wants to compete for the job.”

Commesso may have won the job entering the season, but O’Connell liked what he saw and heard from Duplessis in the process.

“Vinny from Day One has been highly competitive,” O’Connell said. “His skating ability is terrific – he’s an elite goaltending skater – and he’s got confidence in himself. He’s got belief.”

“The conversations that I had with him were more of, he’s like, ‘I’d like the opportunity to compete.’ And that’s all you can hear. That’s all you could want as a coach, and especially from someone going into that sort of scenario. So he’s done well.”

Duplessis knew he’d have to fight for his ice from the moment he became a Terrier.

“When I got the call that I had a chance to come [to BU], I knew exactly what I was coming into [with Commesso and Abel],” he said after the BC game.

Abel got off to a similarly hot start to his career, winning three of his first six starts (3-1-2), although he technically won his Beanpot semifinal appearance against BC, despite the NCAA’s overtime rules, which mark it as a tie. In that span, Abel had a .929 save percentage, a 2.00 GAA and a shutout.

Commesso had been off to a strong as well start before missing time this season. In six appearances so far, he is 5-1-0 with a .917 save percentage and 3.08 GAA. According to O’Connell, he should be available to play this week.

Now because of their strong depth at the position, BU has some decisions to make moving forward in goal, pending Commesso’s return. Continue to ride the hot hand in Duplessis? Get Commesso back into games? Create a platoon?

Regardless, O’Connell knows it was already a position of strength for his team, now made even more formidable thanks to Duplessis’ emergence.

“I think [Commesso] emerged as being the best one at the [start of the season], so I think that’s why he got the starts,” O’Connell said. “Now [Duplessis] is in a spot where he’s doing really well.”

“It’s a good problem to have. I’m really excited about the depth we have there.”

The Terriers will likely return to action this weekend, and will learn who their next opponent is on Tuesday afternoon as the league has reverted to creating the schedule on a week-by-week basis.

Featured Image: Freshman goaltender Vinny Duplessis (31) skates out as his name is announced during the starting lineups ahead of a win against Boston College at Walter Brown Arena on Feb. 6, 2021. Photo by Carolyn Mooney.