After a three-alarm fire destroyed the WTBU studios in March of 2016, a new state-of-the-art studio was built on the third floor of the College of Communication at Boston University. This allows for even more live shows and performances, including WTBU News, the sole news department at WTBU radio.

Immediately after the fire, WTBU News’ team was a strong four anchors. In the following four years, the team expanded from four to 56 active staff members as of the 2020 fall semester. Most of this growth came during an international pandemic, as the station turned to remote programming. Instead of four anchors, the team is now composed of producers, editors, associate editors, online media editors, correspondents and reporters, with opportunities for staff to grow into and create new positions.

From March to September 2020, WTBU News produced two weekly shows remotely, including work from reporters around the world, as the team grew from 18 to 56. With so many new reporters, this allowed for more special packages and a restructuring of the show’s content.

As of November 2020, WTBU News airs on Tuesday and Thursday nights from 6PM-8PM as a mix of both live and remote reporting with proper social distancing and mask wearing. The show includes New England, National, International, Entertainment, Sports news, which have been stalwarts for WTBU News throughout the years. Additionally, WTBU News brings listeners a campus report, highlighting important news and events on BU’s campus, an elections/COVID-19 update and an arts and culture update for Boston.

In addition to the twice weekly show on WTBU radio, WTBU News launched a daily news podcast during the pandemic as well. Starting in May of 2020, WTBU News Today launched on multiple platforms, including Spotify, Apple Podcasts and Anchor. The podcast is roughly 5 minutes, bringing listeners the day’s top headlines.

Although the show has roots in radio and audio, new staff members created a video team to add visuals to their reporting for the WTBU radio website and WTBU News’ social media.

You can stay up to date on our stories and interviews by following us on Instagram and Twitter. 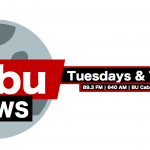 Elizabeth Warren casts ballot, encourages others to do the same