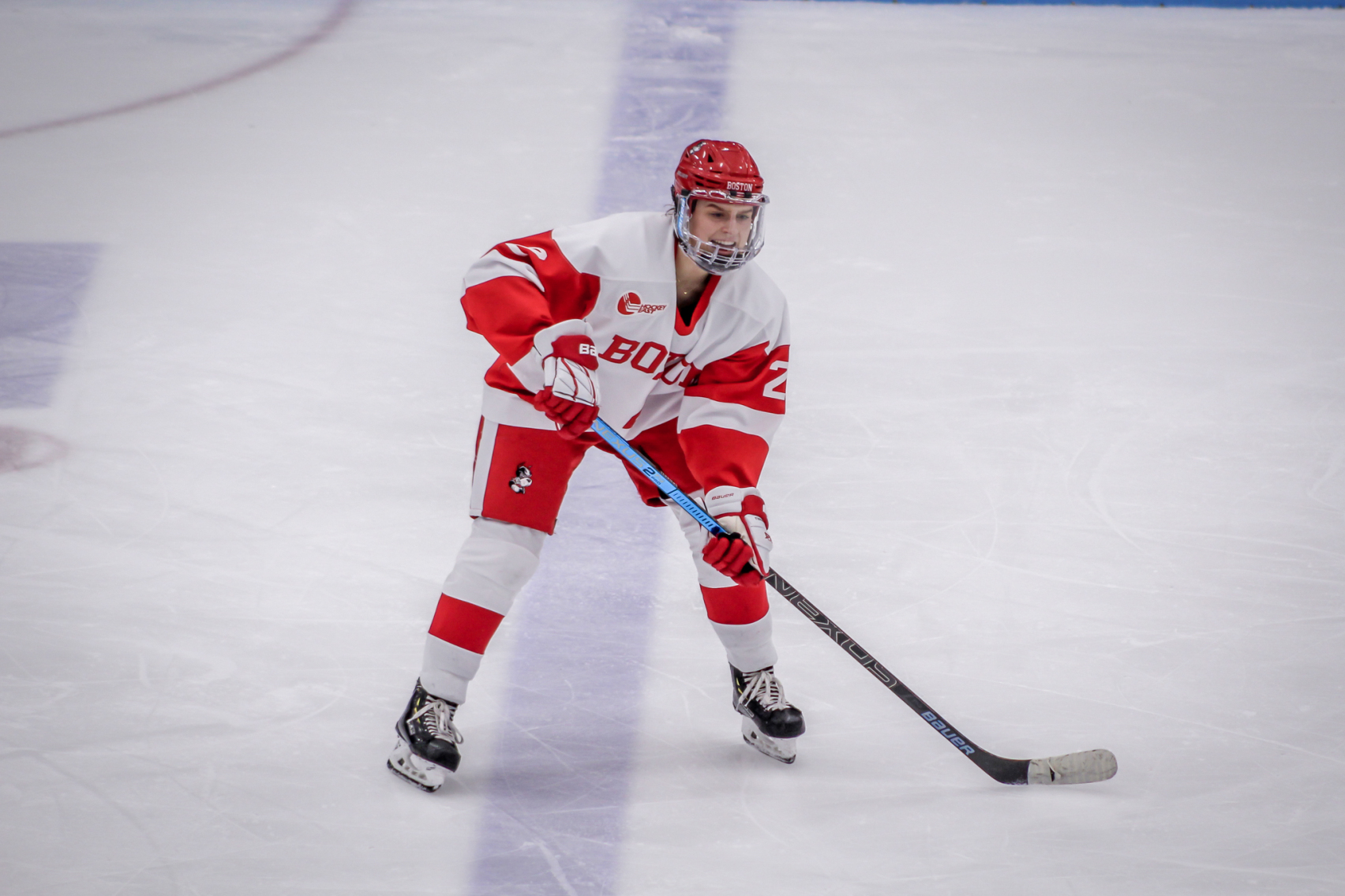 Last season, the Boston University Terriers graduated eight seniors from the team, five of whom were defenders, leaving now-junior Alex Allan and now-sophomores Nadia Mattivi and Grace Parker as the only returners on defense. With an influx of seven freshmen, including four blueliners, this season’s group features plenty of fresh faces.

With the most seniority and experience of anyone in the defensive core, Allan has an opportunity to emerge as a leader on the backend for BU this season. So far, the Abbotsford, B.C., native has been up to the task.

“I think something thats really important for me, being an older defender, is just being there for my younger peers, helping them out with things I learned my freshman year that I want them to be able to grow and get better with as well,” Allan said. “I’ve just been trying to give them little tips and things that maybe they haven’t heard yet since we haven’t been together in a team setting often.”

Allan’s biggest advice to the newcomers up to this point? Shoot low.

“A big thing that I struggled with personally was shooting low. My shots were everywhere and always high,” she said. “Our freshmen defenders have really strong, good shots, so I want them to make sure they’re keeping them low so our forwards don’t get hit.”

Allan knows the feeling of stepping into a big role as a newcomer. As a freshman, the left-shot defender burst onto the scene as a bright up-and-comer on the second defensive pair, tallying a goal and six assists in 37 games. Allan likes what she has seen so far from the youngsters, who have ample opportunity to stand out immediately as well.

“I love [the freshmen]. I think they’re all super awesome,” she said. “They’re all very skilled, which is so exciting to see. They’re very open and ready to learn. I’ll give them tips and stuff, maybe some things I wish I knew as a freshman.

“I think they’re shaping up really well and fitting in nicely.”

Last season, the Terriers and head coach Brian Durocher relied on Allan, who made up one half of a do-it-all top pairing, heavily in key situations at even-strength and on the penalty kill. During the 2019-20 run, Allan recorded 30 blocked shots, seventh-most among the team, after finishing with 37 blocks as a first-year, also seventh-highest on BU that season.

Allan, who has posted 1-13-14 numbers in 73 career contests, credits her development both on and off the ice with her evolution as a player.

“I think a lot of my growth has been maturity on and off the ice,” she said. “On the ice of course because I came in as the only freshman defender, so it was very intimidating. I think a lot of the maturing has to do with being around older girls, playing with them, trying to be on their level and playing against other teams who might be older, bigger and stronger.

“Knowing when to pinch or make certain plays at the right time, instead of just going off what I want to do, is a big thing for me.”

During her first two seasons with the team, Allan played nearly every shift paired with recently-graduated Abby Cook, who closed her time on Comm. Ave. as the program’s all-time scoring leader among blueliners with 99 career points (24g, 75a). Allan admits that not having Cook to her right this year has been an adjustment.

“I think it’s actually really funny because I was talking with some of the girls like ‘oh my god, I’ve never played with anyone else,’” Allan said. “I loved playing with Abby Cook. I think she’s one of the best D partners I’ve ever had. It’s cool and it’s very different for me because I don’t know how some of the new girls are coming in with such big freshmen defensive class.”

However, with this change comes the opportunity for the team to tinker with the roster and see which combinations on defense may turn out to be fits.

“I think things have been really good so far and we’re sort of testing out different pairings and seeing who works well with who,” Allan continued. “I think it’s really cool to see and develop on my own without always having a D partner with me. So I think it’s fun to see different matches and play with different girls.”

Among the differences this year, for obvious reasons, is Hockey East’s delayed season. On Friday Nov. 6, the league announced it will officially start the season on Nov. 20 before officially releasing the 2020-21 schedule on Wednesday Nov. 11. Allan and the Terriers could not be happier to get things going with the upcoming campaign.

“I’m super excited. We’ve been practicing and it’s been unknown when we’re gonna be playing or what the deal is,” she said. “So now that we have something to look forward to and set our goals for, the whole team is super excited to get started. Now we’re practicing together as a team, which has been really fun, getting the team dynamic going.”

The delayed season and restrictions due to the coronavirus pandemic created loads of uncertainty, especially with getting back to campus.

“Coming from [Canada], everything’s different in different places,” Allan continued. “So I was nervous coming to the States, just with there being so many more cases. But I’ve felt very safe being at BU with all the testing and regulations we’ve had. So that’s really good for me, all the Canadians and everyone because it makes you feel a lot more safe.”

The uncertainty was especially prominent around Walter Brown Arena, where the Terriers have been holding group sessions since the beginning of the semester in September, without ever really knowing if, or when, they will return to action, until now.

“Mentally, I think it’s hard to be practicing so much and not know whether you’re having a season, whether or not you’re starting yet,” Allan said. “So I think it’s really good for all of us to find out that we’re going to have a season and just get excited for it. It definitely takes a whole new level to practice because everyone’s ready to go now.”

The restrictions and changes amid the pandemic forced Allan to adapt her summer training and take a different approach to preparing for the season, fine-tuning her puck skills and skating ability.

“I practiced a lot on shooting. Obviously I couldn’t really do anything contact-based, so coming back here and doing a two-on-one, I was kind of like ‘oh my god, what am I doing?’” she said. “I think the focus was definitely more individual skills over the summer just because you couldn’t have contact. So things like shooting, skating, edge work were all good because they translate to games and help me better myself overall as a hockey player.”

Featured image: Alex Allan calls for a pass during the Beanpot final against Northeastern on Feb. 11, 2020 at Walter Brown Arena. Photo by Hannah Yoshinaga.