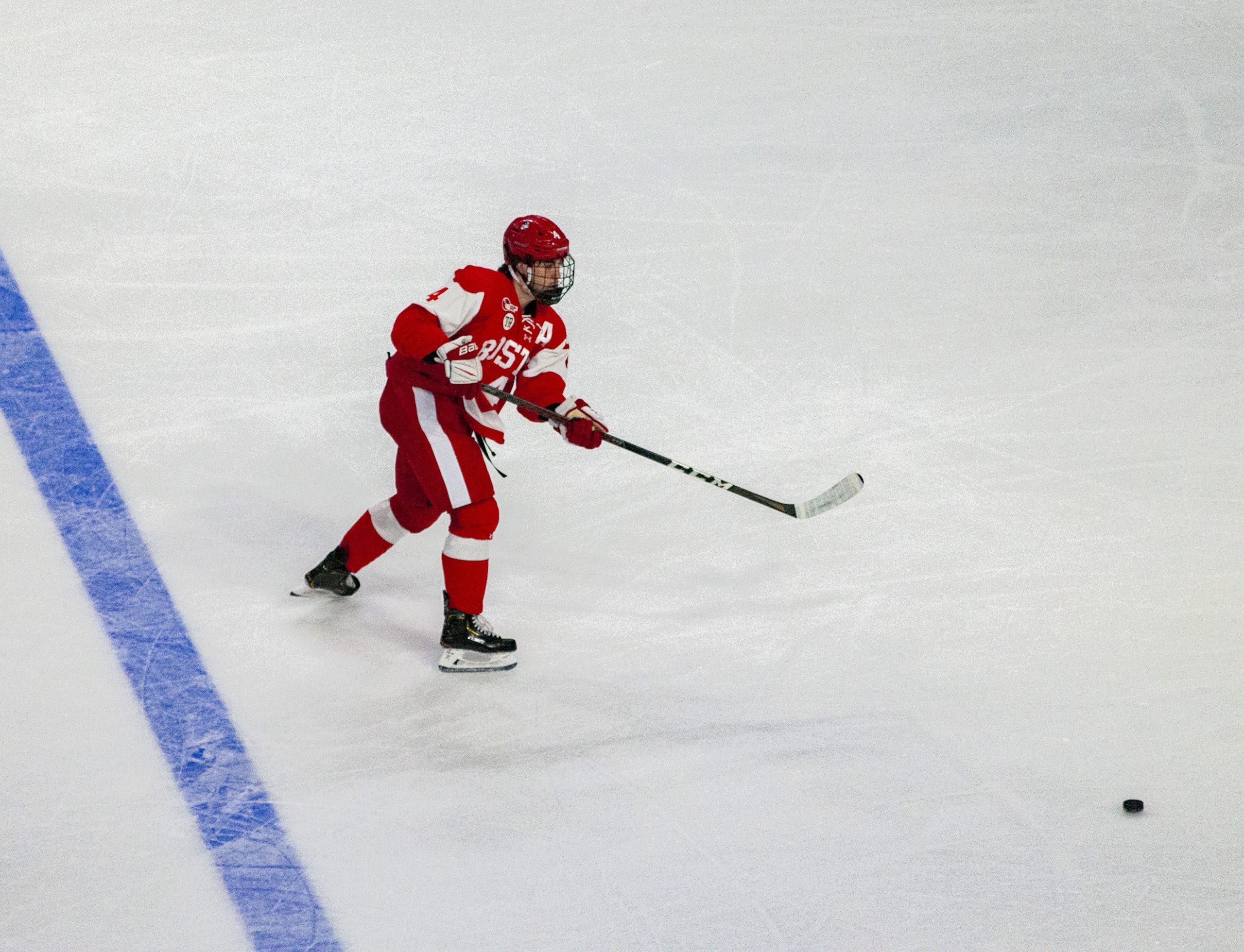 Boston University was moments away from falling to St. Cloud State, 6-2, in the NCAA Northeast Regional semifinal, and the Terrier Sports Radio Network color commentator said on the game broadcast that David Farrance would have a professional contract “in about 20 minutes.”

Not long after the final horn sounded at the Times Union Center in Albany, N.Y., the senior defenseman put pen to paper with the Nashville Predators.

“I signed the contract that night on the bus ride home,” Farrance said. “It’s just been crazy ever since then, getting down [to Nashville], we drove and quarantined the last few days, but so far it’s been pretty good.

“It’s been quite the turnaround since playing that one game in Albany.”

The two-time Hobey Baker top ten finalist inked a two-year, entry-level contract worth a cap hit of $925,000 with Nashville, the club that drafted him 92nd overall in the third round of the 2017 NHL Entry Draft.

As an assistant captain this season, Farrance put up five goals and 11 assists for 16 points in 11 games, averaging 1.45 points per game and leading the nation’s defensemen in that category. During his time on Comm. Ave., the Victor, N.Y., native posted 88 points (26g, 62a) in 113 career games over four seasons. Last season, Farrance led all Division I blueliners with 43 points, 14 goals and nine power-play tallies.

On Wednesday morning, the Predators held an introductory press conference with Farrance.

It goes by quickly

Senior captain Logan Cockerill held his head in his hands in the final moments of the Terriers’ season-ending loss to St. Cloud. After BU retreated to the locker room, Cockerill confirmed it was Farrance’s last game in scarlet and white during his postgame media availability.

While Cockerill and fellow team leaders Max Kaufman and Ty Amonte will apparently remain at BU next season, their do-it-all star defenseman is moving on to the brighter lights and bigger opportunity that he has earned. Farrance said it was emotional in the locker room after the loss, looking back on his collegiate career.

“It stung a lot, and we’re all pretty upset,” he said Wednesday. “I just couldn’t believe it was over. Those four years go by so quick, and really you don’t appreciate it enough until it’s over.

“I’m very glad and happy about all the memories I made and and all the friends that I made along the way.”

The 5-foot-11, 189-pound defenseman had the chance to play with some impressive leaders and players on Comm. Ave., including former captains Dante Fabbro and Brandon Hickey. Farrance feels he has grown a lot from coming to BU as an 18-year-old to now leaving at 21 years old.

“I feel more mature as a person and a player,” he said. “I think the relationships I made [at BU] affected me a lot. I kind of learned from other guys and just some of the older guys when I was younger, like Fabbro and Hickey.”

As his responsibilities on the ice increased over the years, so too did his role in the locker room. Farrance was able to draw on the example set by his predecessors.

“I would absorb some information from them and try to play like them or act like them as a leader,” he said. “I think there were a lot of good guys to look up to while I was there.”

Away from his growth off the ice, Farrance became an even more exceptional player on it. The left-shot blueliner went from sometimes having to play forward to be in the lineup as a freshman to evolving into one of college hockey’s most dynamic defense prospects.

Farrance recalled that when former Terrier head coach David Quinn asked him about playing forward, he did not “look too deep into it.”

“I was fine with it,” Farrance said. “You’re still playing hockey and you’re involved with the team and everything.”

That particular instance serves as a prime example of what Farrance says has been instrumental in his on-ice development.

I think it’s just being coachable, trying to do that to the best of my ability, he said. “Learning how to be coachable and doing whatever’s best for the team.”

Plenty of resources and connections

Farrance will have BU connections in the Music City as well, including the aforementioned Fabbro, who is now in his second full professional season with Nashville. Since turning pro after his junior year at BU, the right-shot defenseman eight goals and 15 assists for 23 points in 103 career contests (2-9-11 totals in 35 games this season).

Beyond Fabbro, Predators head coach John Hynes is a BU alum as well.

Farrance said he has already met with his new head coach and gone over video, and he is happy to be seeing his former teammate.

Aside from the two former Terriers, Farrance will also have the chance to learn from three defensemen, who are widely recognized as some of the best in the league in Mattias Ekholm, Ryan Ellis and reigning Norris Trophy winner Roman Josi.

“It’s a great group of defenseman to learn from and just a good group of pros,” Farrance said. “I’m looking forward to learning and excited to get into NHL video sessions and learn from guys like that firsthand.

“Just excited to be a part of it.”

Farrance has had plenty of time to kill between the pandemic, driving to Nashville and having to quarantine upon arrival. How did he pass the time?

“I’ve actually become quite the chess player,” he said. “I play online chess a lot, as nerdy as that sounds. I just find it fun.”

He credits former U.S. national program teammate Phil Kemp with showing him some tricks everyday at lunch, and said watching the Queen’s Gambit throughout the pandemic has helped him get more into the game.

The Predators and their fans have gained notoriety for their raucous atmosphere during home games at Bridgestone Arena, most notably during their run to the Stanley Cup final in 2017. Farrance remembered he could tell the building was rocking, even though the TV “didn’t do it justice.”

“[Nashville is] probably one of the best cities you could play in,” he said. “The energy and the vibe here is unbelievable.

“I love the city and the fans seem amazing – probably the best fan base in the NHL.”

Joining Farrance in departing BU is junior forwards Jake Wise and Jack DeBoer as well as senior forward Jake Witkowski, who have all entered the NCAA’s transfer portal.

WTBU Sports will have more coverage and details about BU’s offseason and transactions as they become available. Click here for the latest.

Here is David Farrance's OT winner after slipping behind the UMass defense. Nick Zabaneh, with his head up, shows great awareness to find Farrance on the stretch pass. Farrance beats Murray five hole with a nice finish. #BUvsUMass pic.twitter.com/1hzslj7hIM

BU GOAL: David Farrance dances in and goes bar down to get BU on the board with 7:11 left in the first. 3-2, Merrimack. #BUvsMC pic.twitter.com/3swFViC8DP