We report theoretical and experimental results for imaging of electromagnetic phase edge effects in lithography photomasks. Our method starts from the transport of intensity equation (TIE), which solves for phase from through-focus intensity images. Traditional TIE algorithms make an implicit assumption that the underlying in-plane power flow is curl-free. Motivated by our current study, we describe a practical situation in which this assumption breaks down. Strong absorption gradients in mask features interact with phase edges to contribute a curl to the in-plane Poynting vector, causing severe artifacts in the phase recovered. We derive how curl effects are coupled into intensity measurements and propose an iterative algorithm that not only corrects the artifacts, but also recovers missing curl components. 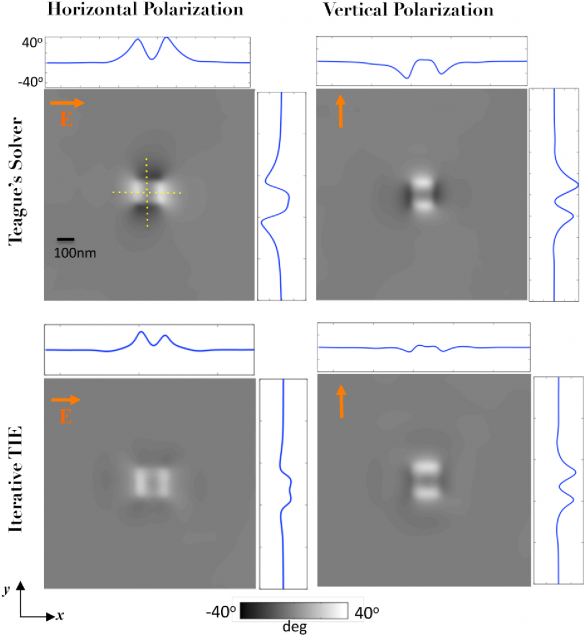 We demonstrate a new approach to the transport of intensity equation (TIE) phase retrieval method which uses structured illumination to improve low-frequency noise performance. In the hybrid scheme, two phase images are acquired: one with uniform and one with sinusoidal grating illumination intensity. The former preserves the high spatial frequency features of the phase best, whereas the latter dramatically increase the response at low spatial frequencies (where traditional TIE notoriously suffers). We then theoretically prove the design of a spectral filter that optimally combines the two phase results while suppressing noise. The combination of uniformly and structured illuminated TIE (hybrid TIE) phase imaging is experimentally demonstrated optically with a calibrated pure phase object.

We propose an alternative method for solving the Transport of Intensity equation (TIE) from a stack of through–focus intensity images taken by a microscope or lensless imager. Our method enables quantitative phase and amplitude imaging with improved accuracy and reduced data capture, while also being computationally efficient and robust to noise. We use prior knowledge of how intensity varies with propagation in the spatial frequency domain in order to constrain a fitting algorithm [Gaussian process (GP) regression] for estimating the axial intensity derivative. Solving the problem in the frequency domain inspires an efficient measurement scheme which captures images at exponentially spaced focal steps, significantly reducing the number of images required. Low–frequency artifacts that plague traditional TIE methods can be suppressed without an excessive number of captured images. We validate our technique experimentally by recovering the phase of human cheek cells in a brightfield microscope.

We use Hamiltonian ray tracing and phase-space representation to describe the propagation of a single spatial soliton and soliton collisions in a Kerr nonlinear medium. Hamiltonian ray tracing is applied using the iterative nonlinear beam propagation method, which allows taking both wave effects and Kerr nonlinearity into consideration. Energy evolution within a single spatial soliton and the exchange of energy when two solitons collide are interpreted intuitively by ray trajectories and geometrical shearing of the Wigner distribution functions.

We propose the use of compressive holography for two–dimensional (2D) subpixel motion localization. Our approach is based on computational implementation of edge–extraction using a Fourier–plane spiral phase mask, followed by compressive reconstruction of the edge of the object. Using this technique and relatively low–cost computer and piezo motion stage to establish ground truth for the motion, we demonstrated localization within 1/30th of a camera pixel in each linear dimension. 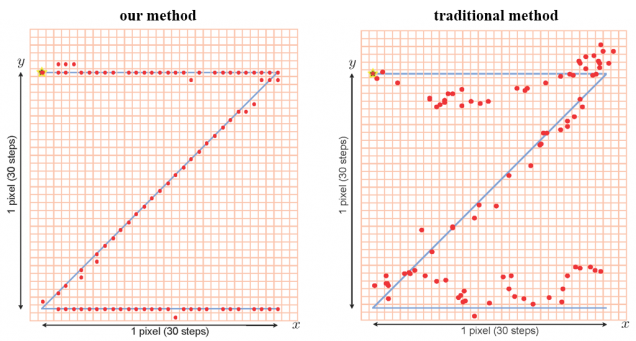 We develop and implement a compressive reconstruction method for tomographic recovery of refractive index distribution for weakly attenuating objects in a microfocus x-ray system. This is achieved through the development of a discretized operator modeling both the transport of intensity equation and the x-ray transform that is suitable for iterative reconstruction techniques. 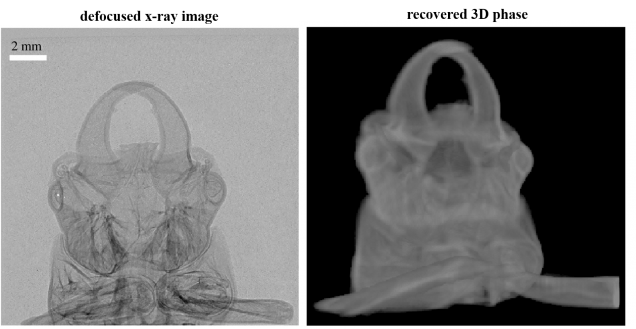 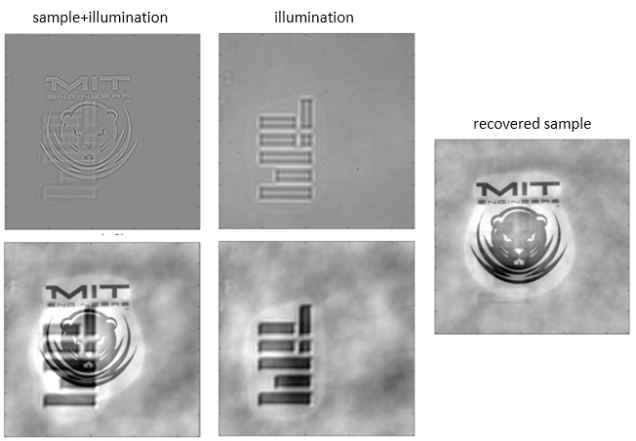 We demonstrate a nonlinear diffusion (NLD) regularization method to solve the transport of intensity equation (TIE). A novel NLD regularization function is proposed to enforce piecewise-constant priors and to remove low-frequency artifacts in the TIE solution.

We propose quantitative localization measurement of a known object with subpixel accuracy using compressive holography. We analyze the theoretical optimal solution in the compressive sampling framework and experimentally demonstrate localization accuracy of 1/45 pixel, in good agreement with the analysis. 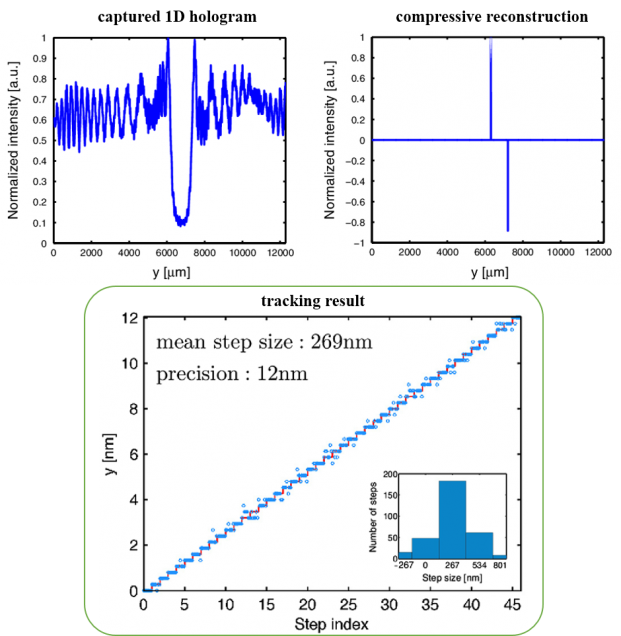 Phase unwrapping is a challenging task for interferometry based techniques in the presence of noise. The majority of existing phase unwrapping techniques are path-following methods, which explicitly or implicitly define an intelligent path and integrate phase difference along the path to mitigate the effect of erroneous pixels. In this paper, a path-independent unwrapping method is proposed where the unwrapped phase gradient is determined from the wrapped phase and subsequently denoised by a TV minimization based method. Unlike the wrapped phase map where 2πphase jumps are present, the gradient of the unwrapped phase map is smooth and slowly-varying at noise-free areas. On the other hand, the noise is greatly amplified by the differentiation process, which makes it easier to separate from the smooth phase gradient. Thus an approximate unwrapped phase can be obtained by integrating the denoised phase gradient. The final unwrapped phase map is subsequently determined by adding the first few modes of the unwrapped phase. The proposed method is most suitable for unwrapping phase maps without abrupt phase changes. Its capability has been demonstrated both numerically and by experimental data from shearography and electronic speckle pattern interferometry (ESPI). 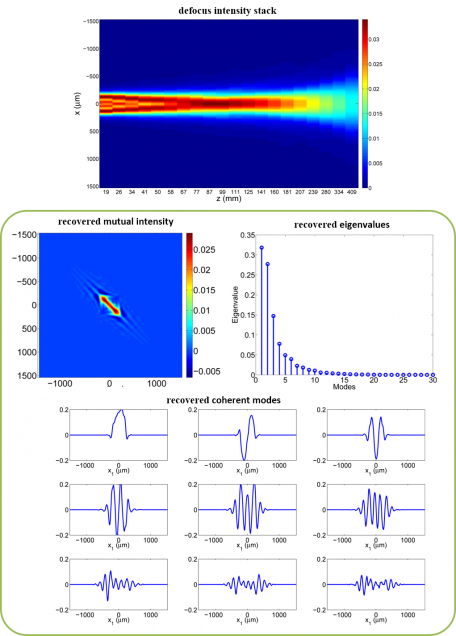 A number of “top-down” lithographic and “bottom-up” self-assembly methods have been developed to fabricate three-dimensional (3D) nanostructures to support the recent advances in nanotechnology. But they are limited by a number of factors such as fabrication cost, pattern resolution, and/or flexibility of geometry. Here we present a 3D nanolithography process that utilizes self-assembled nanospheres to create a periodic array of focal spots, which are then replicated across multiple depth in a transparent medium according to the Talbot effect. The Talbot field then exposes a pattern onto the underlying photoresist, recording the 3D intensity distribution. We have demonstrated designable complex 3D periodic structures with 80 nm minimum feature size, roughly one-fourth of the operating wavelength. This approach combines 2D colloidal self-assembly and 3D phase lithography, is robust, cost-effective, and widely applicable to nanoscale research and manufacturing.

We introduce a Lüneburg lens design where Kerr nonlinearity is used to compensate for the focal point shift caused by diffraction of a Gaussian source. A computationally efficient iterative method introduced in [Opt. Lett. 35, 4148 (2010)] is used to provide ray diagrams in the nonlinear case and verify the focal shift compensation. We study the joint dependence of focal shift on waist size and intensity of Gaussian source, and show how to compensate spherical aberration caused by the nonlinearity by a small perturbation of the Lüneburg profile. Our results are specific to Lüneburg lens but our approach is applicable to more general cases of nonlinear nonperiodic metamaterials.

We present a digital in-line holographic imaging system for measuring the size and three-dimensional position of fast-moving bubbles in air–water mixture flows. The captured holograms are numerically processed by performing a two-dimensional projection followed by local depth estimation to quickly and efficiently obtain the size and position information of multiple bubbles simultaneously. Statistical analysis on measured bubble size distributions shows that they follow lognormal or gamma distributions. 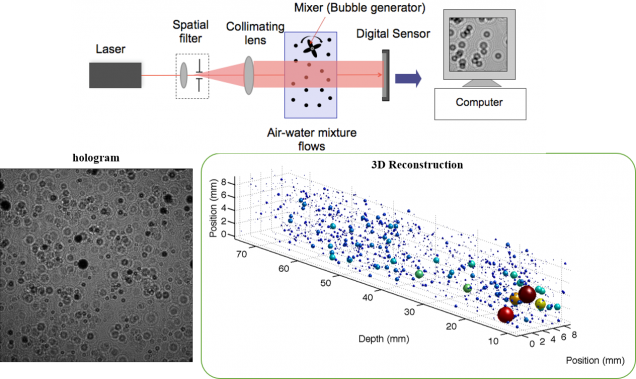 We demonstrate a method for improving the accuracy of phase retrieval based on the Transport of Intensity equation by using intensity measurements at multiple planes to estimate and remove the artifacts due to higher order axial derivatives. We suggest two similar methods of higher order correction, and demonstrate their ability for accurate phase retrieval well beyond the ‘linear’ range of defocus that TIE imaging traditionally requires. Computation is fast and efficient, and sensitivity to noise is reduced by using many images.

We present an iterative method for simulating beam propagation in nonlinear media using Hamiltonian ray tracing. The Wigner distribution function of the input beam is computed at the entrance plane and is used as the initial condition for solving the Hamiltonian equations. Examples are given for the study of periodic self-focusing, spatial solitons, and Gaussian–Schell model in Kerr-effect media. Simulation results show good agreement with the split-step beam propagation method. The main advantage of ray tracing, even in the nonlinear case, is that ray diagrams are intuitive and easy to interpret in terms of traditional optical engineering terms, such as aberrations, ray-intercept plots, etc.