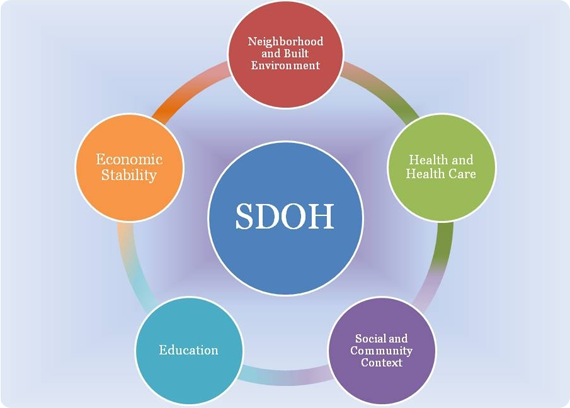 “The social determinants of health are the conditions in which people are born, grow, live, work and age” (WHO, 2020). Social Determinants of Health (SDOH) are external environmental factors that affect multiple aspects of an individual’s health. Health functioning, quality of life, and health risks are all affected by social determinants. The 5 main categories of social determinants of health are Economic Stability, Education, Social and Community Contact, Health and Health Care, and Neighborhood and Built Environment (Office of Disease Prevention and Health Promotion, 2020). Within each category are various key issues that provide the foundation to form these classifications of the SDOH. For example, employment, food insecurity, housing instability, and poverty all influence economic stability.

In addition to conducting interdisciplinary research aimed at understanding how alcohol use impacts people affected by HIV and developing interventions to reduce alcohol use and alcohol and HIV-related consequences, the URBAN ARCH Consortium has prioritized the investigation of SDOH over the years. URBAN ARCH investigators have examined economic stability (housing instability and homelessness), neighborhood and built environment (exposure to violence), social and community context (discrimination/stigma), and access to health and health care.

In “Recent drug use, homelessness and increased short-term mortality in HIV-infected persons with alcohol problems.” (Walley et al., 2008), homelessness was found to be associated with increased short-term mortality in HIV-positive patients who used alcohol, and housing was proposed to improve the mortality of HIV-positive patients. In “Factors associated with attendance in 12-step groups (Alcoholics Anonymous/Narcotics Anonymous) among adults with alcohol problems living with HIV/AIDS” (Orwat et al., 2011), a positive association was found between homelessness, Hepatitis C infection, and current drug dependence. These studies provide evidence that housing instability and homelessness impact the health of many, especially vulnerable populations, such as people with HIV and people with substance use disorders.

Exposure to violence has been investigated in a number of URBAN ARCH publications. In “Sexual violence from police and HIV risk behaviors among HIV-positive women who inject drugs in St. Petersburg, Russia: A mixed methods study” (Lunze et al., 2016), the authors investigated police sexual violence against people who inject drugs and HIV risk correlates. Sexual violence from police was associated with more frequent drug injections, and a systematic increase in risk environment for women who use drugs. By studying and addressing violence as a social determinant of health, serious human rights issues can be unearthed and undertaken.

A wide range of social determinants of health fall under the category of social and community context, which includes stigma, a highly researched topic within the URBAN ARCH consortium. In the URBAN ARCH paper  “HIV stigma and unhealthy alcohol use among people living with HIV in Russia” (Lunze et al., 2017), authors found that alcohol dependence is associated with high HIV stigma among Russian people living with HIV. Stigma should be accounted for when implementing HIV prevention efforts. In the qualitative analysis “‘It is easier for me to shoot up’: stigma, abandonment, and why HIV-positive drug users in Russia fail to link to HIV care”, researchers examined the barriers to HIV care and found that stigma was a barrier for HIV care initiation by people who inject drugs (Kiriazova et al., 2017). URBAN ARCH research on stigma has been linked to HIV and substance use disorder health care, which brings us the final and most commonly examined SDOH of URBAN ARCH: health and health care.

Access to health and health care is a basic human right, which many are denied. Limited or non-existent access to care greatly impacts people’s health. In “Alcohol and HIV disease progression: Weighing the evidence”, Samet & Hahn discussed access to and retention in HIV care as well as the receipt of antiretroviral therapy for HIV (Samet & Hahn, 2010). This paper found that people who were heavy drinkers were less likely to receive antiretroviral therapy, and heavy alcohol use was associated with lower retention in care. The Uganda team found that alcohol consumption was associated with a lower likelihood of being tested for HIV among women in “Alcohol consumption as a barrier to prior HIV testing in a population-based study in rural Uganda” (Fatch et al., 2013). Access to and retention in HIV and substance use care is vital for this population, so that people living with HIV and who have a substance use disorder can achieve positive clinical outcomes. Discovering how we can increase access to care is one of the most important goals of the URBAN ARCH consortium. The consortium will continue to research access to health care, and the various barriers between people and their care in order to learn how to appropriately provide care to those who need it most.

URBAN ARCH has had the opportunity to examine many other SDOH in addition to the ones highlighted above. The URBAN ARCH consortium is dedicated to continuing to investigate and explore SDOH, and the impact they have on these populations. If you are interested in researching social determinants of health in the context of HIV and alcohol use with existing URBAN ARCH data, we invite you to explore our data and sample repository webpage here and send any inquiries or requests to Natalia Gnatienko.

About Social Determinants of Health. WHO (2020) Retrieved from https://www.who.int/social_determinants/sdh_definition/en/