Considerable alarmism surrounds the continuing adoption of artificial intelligence (AI) technologies in the workplace. One paper claims that 47% of jobs in the US will be “at risk of automation” in the coming decade. Others claim that workers in many professional occupations will soon be replaced by machines. But how is AI actually affecting jobs and the marketplace more generally? Some new research suggests the actual impact of AI appears to be rather different.

To explore the emerging impact of AI, a new TPRI paper reports the results of a survey of start- up firms who develop and sell commercial AI applications. The survey asked these startups what they are actually doing, what technologies they use, how they get data, who their customers are, and how the technology affects jobs and skills at their customers’ firms. The survey provides rich detail on this emerging business. Several results stand out.

One set of questions concerns whether AI benefits large firms at the expense of small and medium ones. A few large tech firms are investing huge amounts into AI development; those firms also have access to large amounts of data needed to train machine learning algorithms. Most of the startups do not rely on their own data, using customer data or public data instead. They sell across the globe and across industries, although their presence appears limited in some industries. The survey also finds that AI startups sell disproportionately to medium size firms. The overall picture is one where startups have robust markets but where they may also face some entry barriers in other markets. 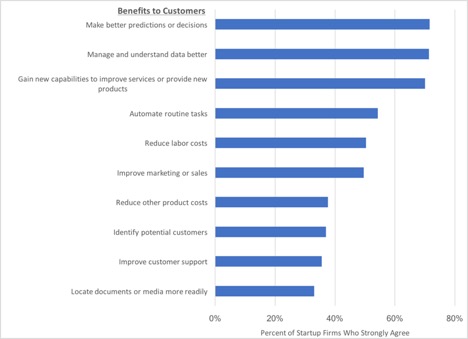 A related set of questions asked the startups in which occupations customer firms tended to increase or decrease jobs. The customers reduce jobs for manual workers, clerical/administrative workers, and front-line service workers. But they also report growing employment for professional, managerial, and sales/marketing occupations because of the technology. 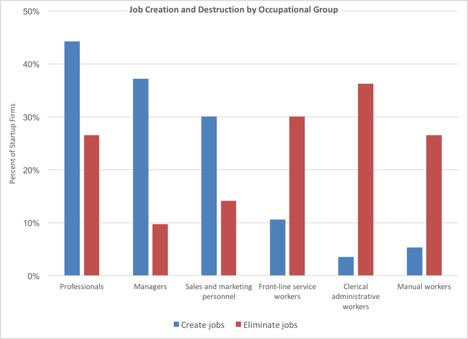 Combined, these findings suggest that while AI might eliminate some jobs, it will also likely be associated with increased employment and wages for other groups of workers. For professional jobs in particular, it appears that AI is enhancing workers’ capabilities, making them more productive and creating more jobs for them. The rumors of the AI job takeover do appear to be greatly exaggerated.

Nevertheless, AI may be highly disruptive to jobs. This pattern of shifting occupational demand resembles what happened when personal computers first appeared in the workplace, as professional and managerial occupations seemed to grow while clerical and administrative positions in the same industries shrank. While the net number of jobs might not be drastically affected, many people will be forced to make transitions in order to find new work, to acquire new skills and new occupations.

This research was funded by the Ewing Marion Kauffman Foundation. The contents of this publication are solely the responsibility of the authors.

Psychedelic Patents are Broken Because the Patent System Is Broken

James Bessen's research cited in “Psychedelic Patents are Broken Because the Patent System Is Broken” article in VICE, May 09, 2022.