This letter is part of a monthly series from the Director of the CRC, Dr. Michelle Amazeen

A Message from the CRC Director, Dr. Michelle Amazeen 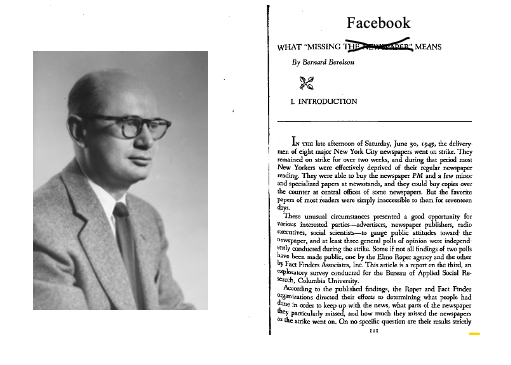 In June of 1945, the deliverymen of eight major New York City newspapers went on strike for over two weeks, effectively depriving residents of reading the newspaper. Chronicled in Bernard Berelson’s 1949 study, “What Missing the Newspaper Means,” it is an exemplar of the Uses and Gratifications approach to the study of media. On Monday, October 4, 2021, the world had a chance to see what missing Facebook (and its subsidiary platforms) means. While initial thoughts of Facebook platforms might bring to mind posts such as cat videos or birthday messages, the platform is used for serious purposes as well. For instance, Dr. Dana Janbek notes in her research that refugees rely heavily on communication technologies – such as WhatsApp – to navigate displacement. Their phones act as a lifeline during their migration as they seek out escape routes and safe haven. In these cases, missing social media can imperil lives.

Indeed, the promise and perils of social media are considered by many of our CRC research fellows. For instance, as it relates to public relations, Dr. Yi Grace Ji offers guidance to non-profits on what makes their social media posts most effective in driving behavioral intent. Dr. Arunima Krishna has studied how the use of Twitter affects public intentions for corporate buycotts or boycotts. With respect to cable news, Dr. Deborah Jaramillo has examined how the use of Twitter allows politicians to control their message and reach wider audiences. Drs. Denis Wu and Michael Elasmar have also studied Twitter to determine which countries are mentioned the most and why. Regarding the Chinese equivalent to Twitter – Weibo – Dr. Chris Chao Su has examined the extent to which nationalist discourse is transferred between authorities and the public. Dr. Mina Tsay-Vogel has examined how Facebook’s use affects privacy perceptions and self-disclosure behaviors.

The Facebook outage came on the heels of revelations, from whistle blower Frances Haugen, that the social media giant has been placing profits over public safety. As she shared with The Wall Street Journal and the U.S. Senate Commerce subcommittee on consumer protection, Facebook knows its Instagram platform negatively affects many teen girls by worsening their body-image issues. According to Haugen, Facebook executives also know their own platform contributed to the misinformation epidemic, with their tools being used to sow doubt about the threat of the Covid-19 pandemic and the safety of the Covid-19 vaccines. Facebook also disbanded its civic misinformation team which Haugen argues led to the January 6th riot. (Full disclosure: During November 2020, Facebook had recruited me to join their “civic integrity team.”)

Interestingly, earlier in 2020, Facebook was paying for sponsored content – ads that look like news articles – to tout its election integrity efforts with titles such as, “How Facebook is helping to ensure the integrity of the 2020 Election.” 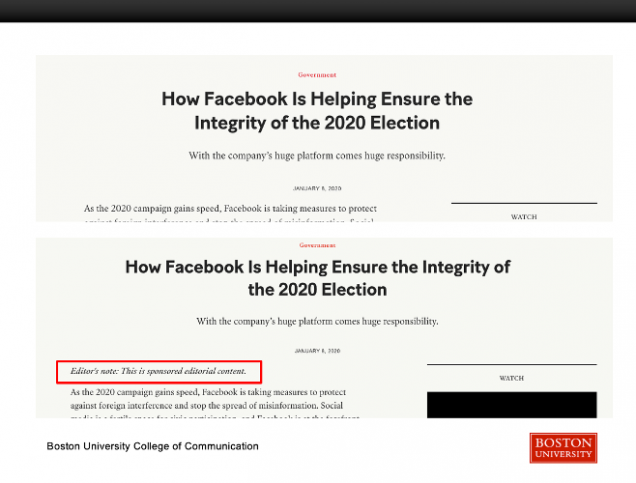 However, the content was not initially labeled as being paid for, as required by the Federal Trade Commission, and it also was promoted on Facebook by Chief Operating Officer, Sheryl Sandberg, as genuine journalism, which is also a violation of FTC stipulations. This lack of labeling is an example of the misuse of sponsored content I spoke about here, and it serves to reinforce Haugen’s account of dubious tactics employed by Facebook. 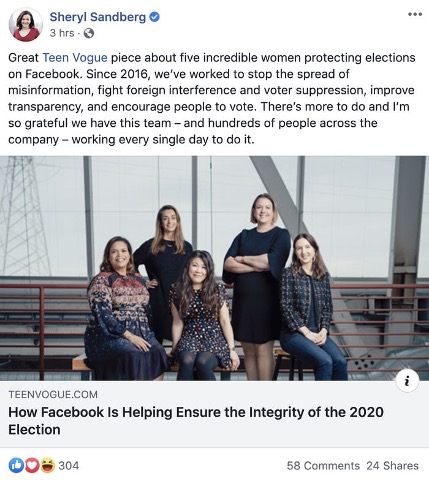 Beyond these damning disclosures by the whistle blower, we also know that the emergence of social media has had significant impacts on the contemporary journalism industry. Most devastating has been the way digital companies—particularly Facebook, Google, and Amazon—have siphoned off advertising dollars that once helped fund news organizations. But the growth of social media has also affected the relationship between journalism and truth as Drs. James E. Katz and Kate K. Mays confront in their edited book. Also troubling is the revelation in Dr. Chris Wells’ recent publication that mainstream and hyperpartisan media actually helped the Internet Research Agency (IRA) – an online influence group benefitting Russian interests – in building its Twitter followers by embedding IRA tweets in their news coverage.

As journalism has become increasingly dependent on, and intertwined with, social media, local journalism, in particular, has suffered. But as we learned from Chartbeat the last time Facebook went down (albeit for a much shorter period of time), when the digital giant is inaccessible people are more likely to access news sites directly. With the aim of restoring our trust in news, Dr. Lei Guo is working on examining the life cycle of local journalism with an award from the National Science Foundation. The study will incorporate an analysis of how local news stories evolve through different media platforms, including social media.

Of course, things have changed in media over the past 75 years. Today, especially given the even greater reliance on digital platforms during the pandemic, the uses and effects of media remain far reaching and complex—and more important than ever. Understanding how we use media, and how media shape both our individual lives and our national and international conversations is both the scholarly mission as well as the personal passion of our CRC fellows. Tune in for more research updates in future posts.