The Communication Research Colloquium Series at Boston University was established in October 2009. This series consists of monthly research presentations that highlight current and original research of faculty in the College of Communication. This forum provides an intellectual exchange of ideas and perspectives, features scholarship in several methodological traditions, and fosters discussions among faculty and students about a variety of research topics in the field of communication. 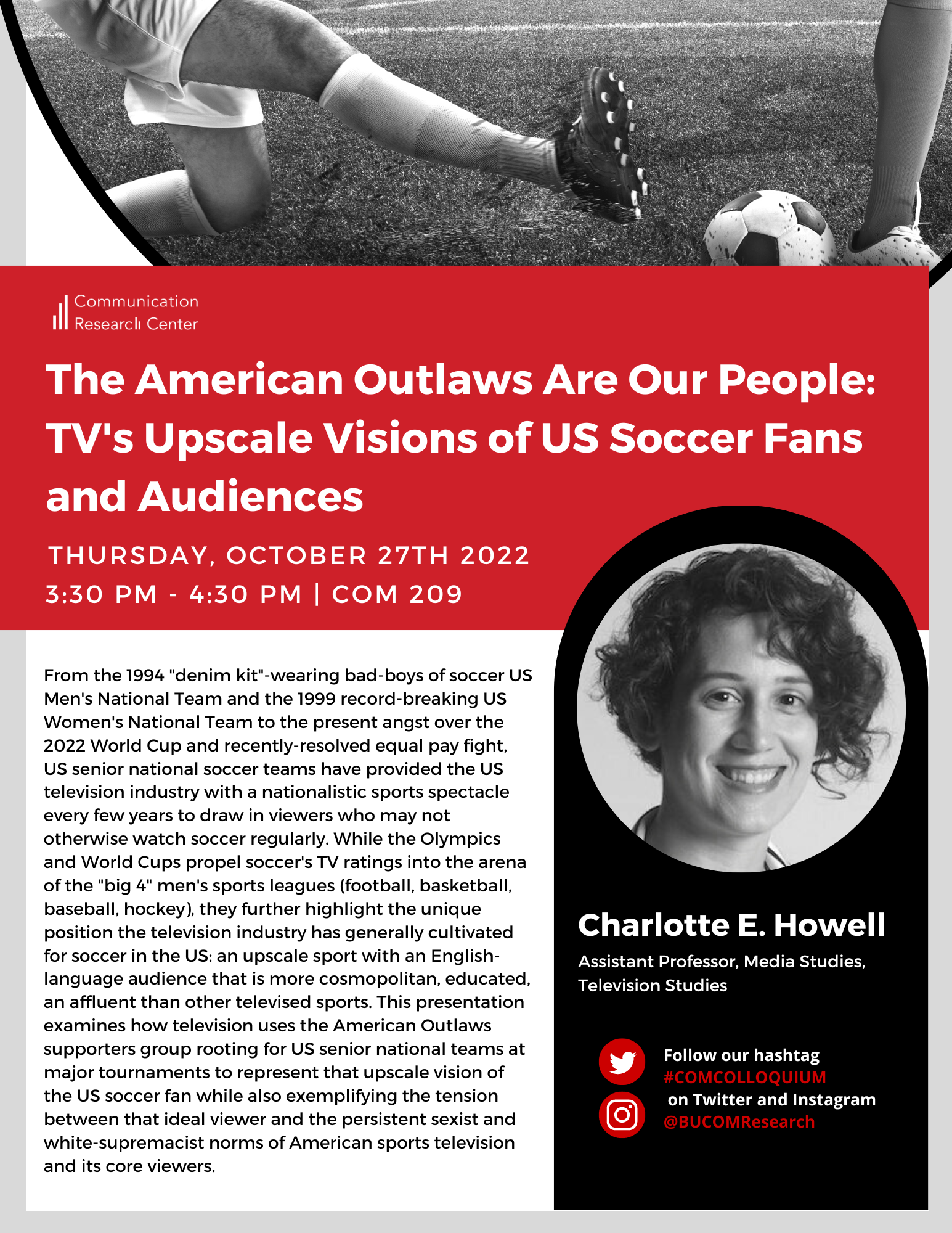 The American Outlaws Are Our People”: TV’s Upscale Visions of US Soccer Fans and Audiences

From the 1994 “denim kit”-wearing bad-boys of soccer US Men’s National Team and the 1999 record-breaking US Women’s National Team to the present angst over the 2022 World Cup and recently-resolved equal pay fight, US senior national soccer teams have provided the US television industry with a nationalistic sports spectacle every few years to draw in viewers who may not otherwise watch soccer regularly. While the Olympics and World Cups propel soccer’s TV ratings into the arena of the “big 4” men’s sports leagues (football, basketball, baseball, hockey), they further highlight the unique position the television industry has generally cultivated for soccer in the US: an upscale sport with an English-language audience that is more cosmopolitan, educated, an affluent than other televised sports. This presentation examines how television uses the American Outlaws supporters group rooting for US senior national teams at major tournaments to represent that upscale vision of the US soccer fan while also exemplifying the tension between that ideal viewer and the persistent sexist and white-supremacist norms of American sports television and its core viewers.
Video coming soon 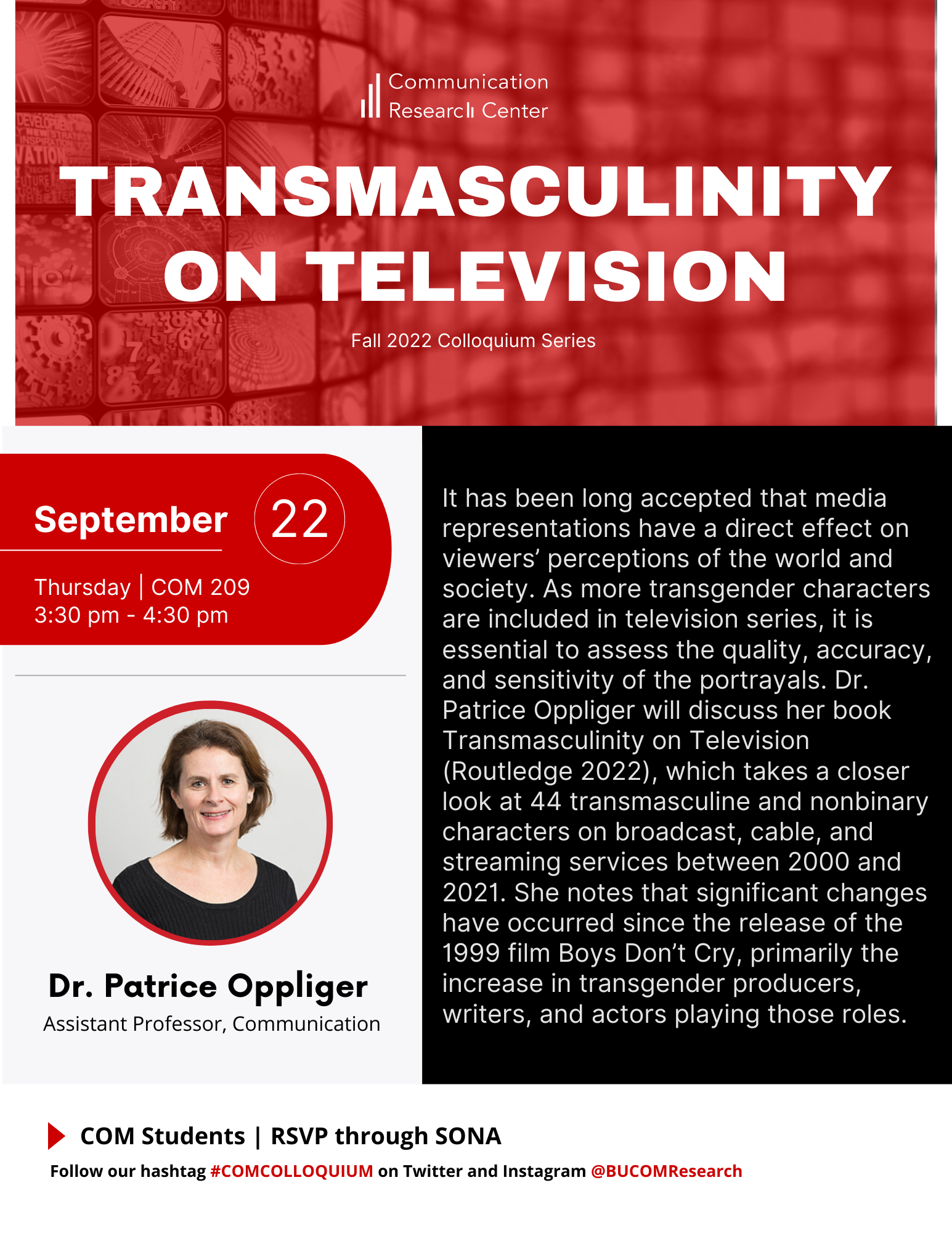 It has been long accepted that media representations have a direct effect on viewers’ perceptions of the world and society. As more transgender characters are included in television series, it is essential to assess the quality, accuracy, and sensitivity of the portrayals. Dr. Patrice Oppliger will discuss her book Transmasculinity on Television (Routledge 2022), which takes a closer look at 44 transmasculine and nonbinary characters on broadcast, cable, and streaming services between 2000 and 2021. She notes that significant changes have occurred since the release of the 1999 film Boys Don’t Cry, primarily the increase in transgender producers, writers, and actors playing those roles. 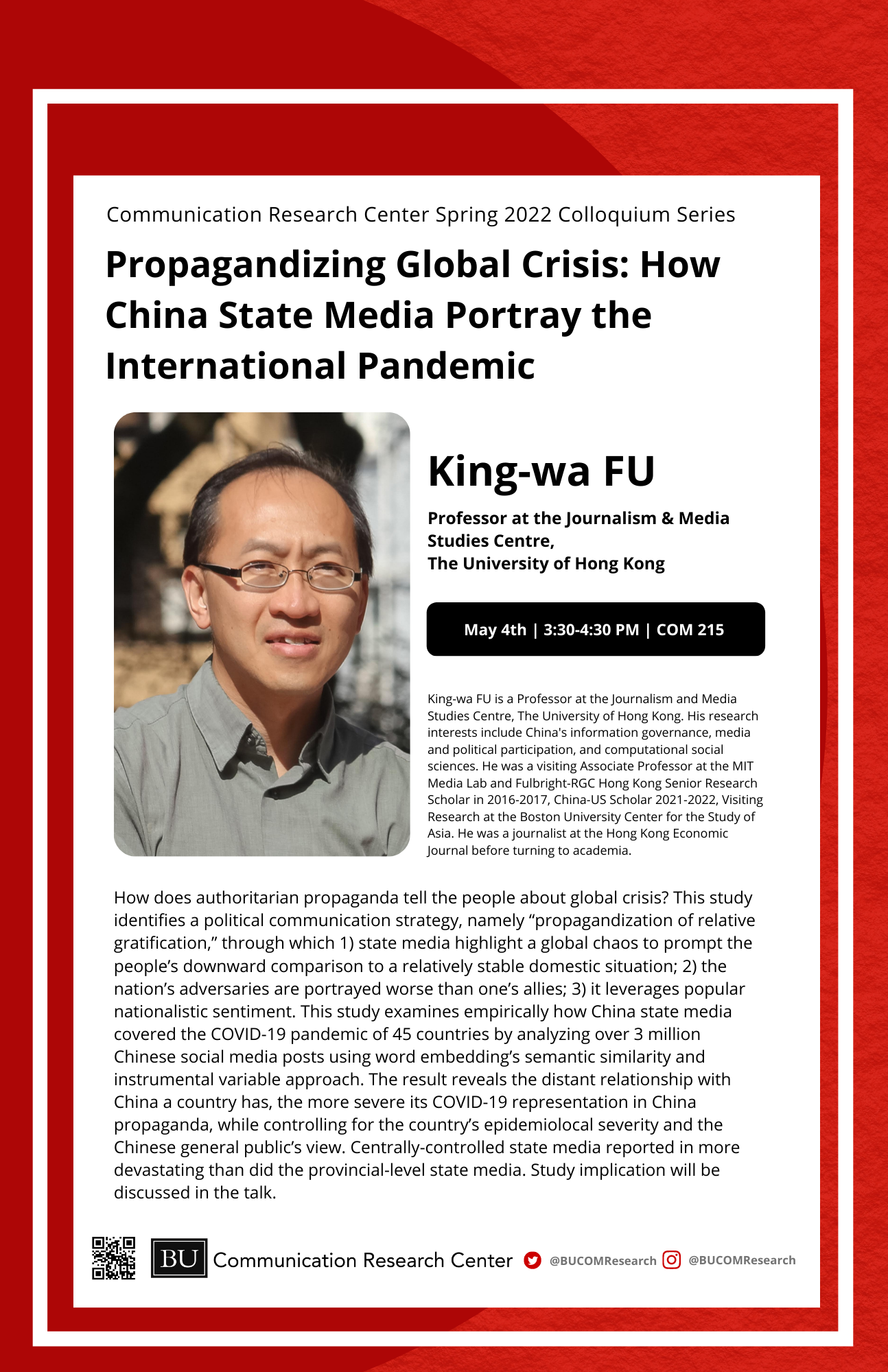 Dr. King-wa Fu
Professor at the Journalism & Media Studies Centre, The University of Hong Kong
May 2022

How does authoritarian propaganda tell the people about global crisis? This study identifies a political communication strategy, namely “propagandization of relative gratification,” through which 1) state media highlight a global chaos to prompt the people’s downward comparison to a relatively stable domestic situation; 2) the nation’s adversaries are portrayed worse than one’s allies; 3) it leverages popular nationalistic sentiment. This study examines empirically how China state media covered the COVID-19 pandemic of 45 countries by analyzing over 3 million Chinese social media posts using word embedding’s semantic similarity and instrumental variable approach. The result reveals the distant relationship with China a country has, the more severe its COVID-19 representation in China propaganda, while controlling for the country’s epidemiolocal severity and the Chinese general public’s view. Centrally-controlled state media reported in more devastating than did the provincial-level state media. Study implication will be discussed in the talk. 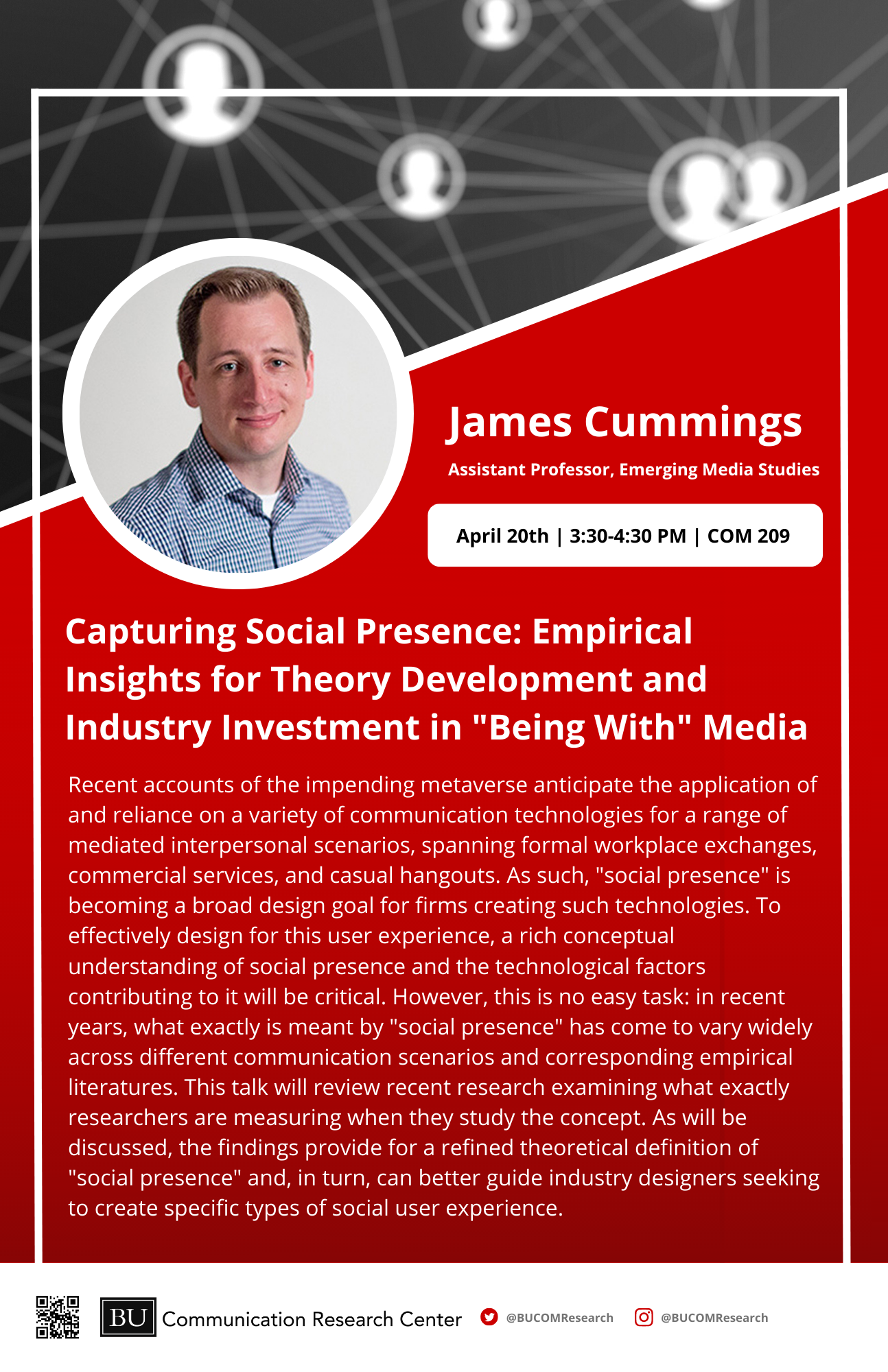 Capturing Social Presence: Empirical Insights for Theory Development and Industry Investment in “Being With” Media

Recent accounts of the impending metaverse anticipate the application of and reliance on a variety of communication technologies for a range of mediated interpersonal scenarios, spanning formal workplace exchanges, commercial services, and casual hangouts. As such, “social presence” is becoming a broad design goal for firms creating such technologies. To effectively design for this user experience, a rich conceptual understanding of social presence and the technological factors contributing to it will be critical. However, this is no easy task: in recent years, what exactly is meant by “social presence” has come to vary widely across different communication scenarios and corresponding empirical literatures. This talk will review recent research examining what exactly researchers are measuring when they study the concept. As will be discussed, the findings provide for a refined theoretical definition of “social presence” and, in turn, can better guide industry designers seeking to create specific types of social user experience. 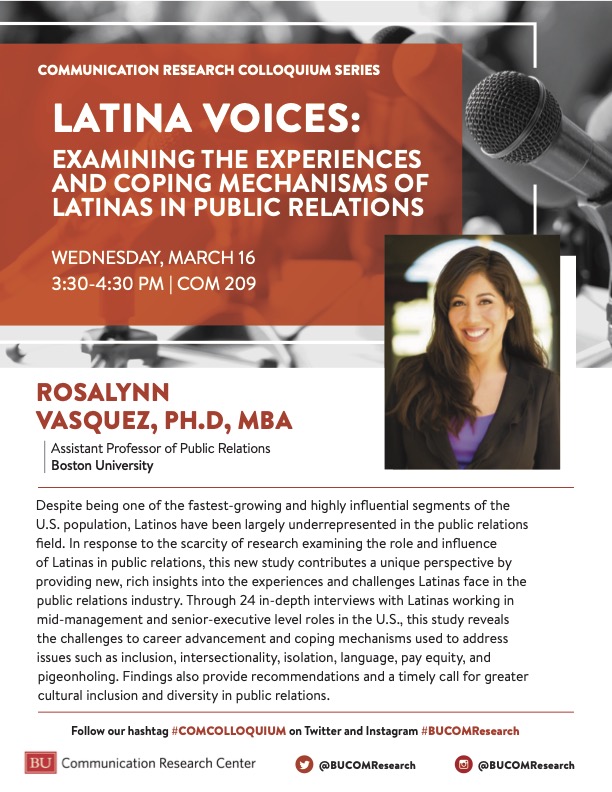 Latina Voices: Examining the Experiences and Coping Mechanisms of Latinas in Public Relations

Despite being one of the fastest-growing and highly influential segments of the U.S. population, Latinos have been largely underrepresented in the public relations field. In response to the scarcity of research examining the role and influence of Latinas in public relations, this new study contributes a unique perspective by providing new, rich insights into the experiences and challenges Latinas face in the public relations industry. Through 24 in-depth interviews with Latinas working in mid-management and senior-executive level roles in the U.S., this study reveals the challenges to career advancement and coping mechanisms used to address issues such as inclusion, intersectionality, isolation, language, pay equity, and pigeonholing. Findings also provide recommendations and a timely call for greater cultural inclusion and diversity in public relations. 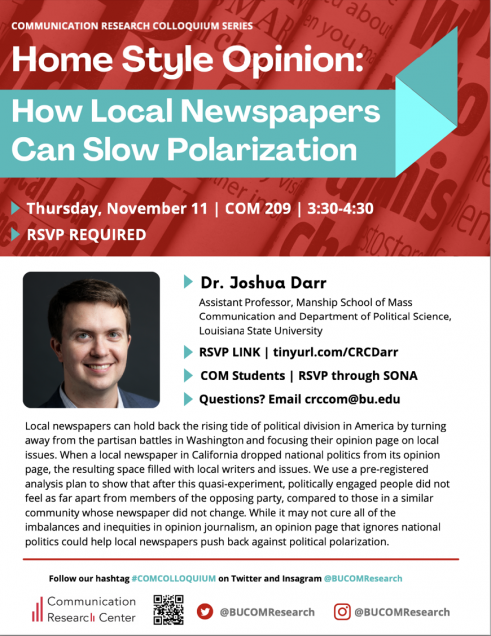 Local newspapers can hold back the rising tide of political division in America by turning away from the partisan battles in Washington and focusing their opinion page on local issues. When a local newspaper in California dropped national politics from its opinion page, the resulting space filled with local writers and issues. We use a pre-registered analysis plan to show that after this quasi-experiment, politically engaged people did not feel as far apart from members of the opposing party, compared to those in a similar community whose newspaper did not change. While it may not cure all of the imbalances and inequities in opinion journalism, an opinion page that ignores national politics could help local newspapers push back against political polarization. 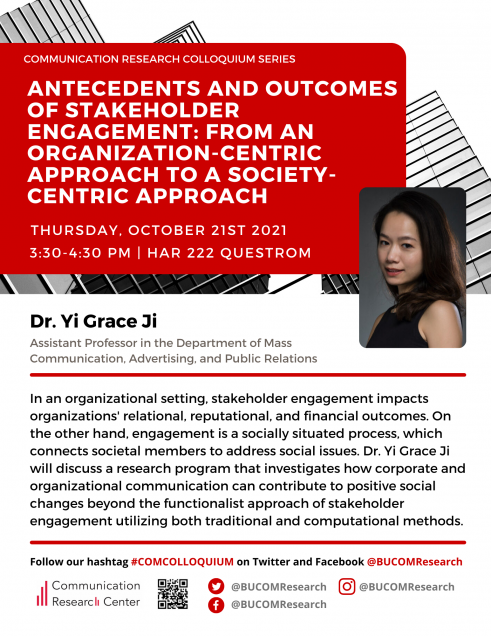 In an organizational setting, stakeholder engagement impacts organizations’ relational, reputational, and financial outcomes. On the other hand, engagement is a socially situated process, which connects societal members to address social issues. Dr. Yi Grace Ji will discuss a research program that investigates how corporate and organizational communication can contribute to positive social changes beyond the functionalist approach of stakeholder engagement utilizing both traditional and computational methods. 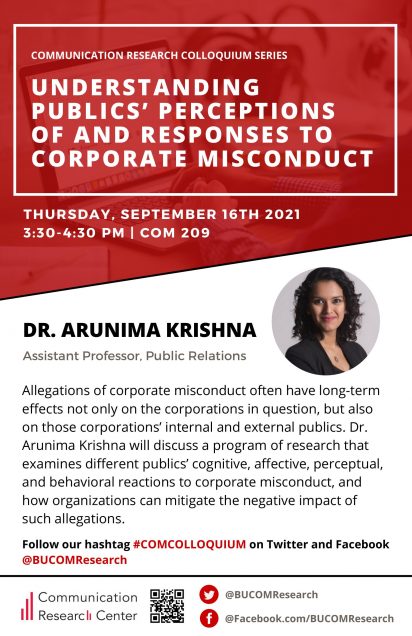 Understanding Publics’ Perceptions of and Responses to Corporate Misconduct

Allegations of corporate misconduct often have long-term effects
not only on the corporations in question, but also on those
corporations’ internal and external publics. Dr. Arunima Krishna
will discuss a program of research that examines different
publics’ cognitive, affective, perceptual, and behavioral reactions
to corporate misconduct, and how organizations can mitigate the
negative impact of such allegations.