The Admin Core successfully submitted its grant renewal application to NIH in mid-January, and it also provided assistance to the BDM Core and U01s in preparing and submitting their applications on time. 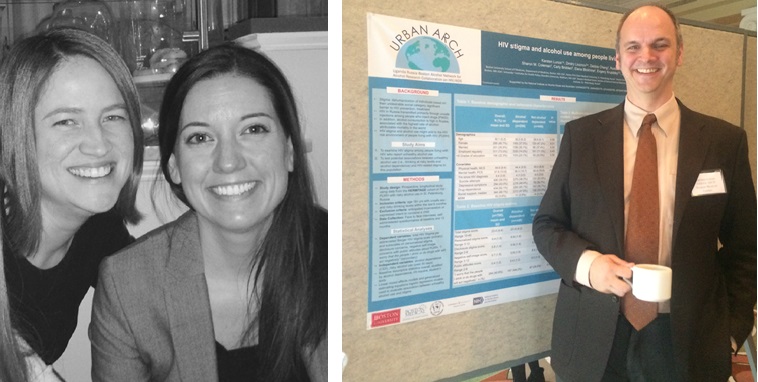 l-r: Carly Bridden, Alicia Ventura, and Karsten Lunze, an URBAN ARCH junior investigator, presenting his poster titled “HIV Stigma and Alcohol Use among People Living with HIV in Russia” at the CHAART Meeting in Washington D.C.

Carly Bridden, Julia Canfield, and Terri O’Brien are also assisting with the coordination of a Boston University Medical Campus (BUMC) reception at the Conference on Retroviruses and Opportunistic Infections (CROI) on Wednesday, February 24th from 6:00-8:00PM at the Pour House in Boston. This reception will bring together investigators, staff, and junior scholars in the fields of HIV, HCV, and substance use from URBAN ARCH, BU Section of Infectious Diseases, CHERISH, and the Clinical Addiction Research and Education (CARE) Unit. Please RSVP to carly.bridden@bmc.org if you would like to attend this reception.

Finally, Admin Core staff have recently begun planning the 5th URBAN ARCH Annual Meeting to be held on April 5th and 6th at BUMC. We look forward to welcoming both internal and external investigators and collaborators back to Boston for discussions and updates on URBAN ARCH HIV and alcohol research! Please email carly.bridden@bmc.org if you would like to attend this year’s Annual Meeting.

The BDM Core continues to assist with data management activities across URBAN ARCH and is working to finalize data sets for the Uganda and Boston cohorts. In addition, several data analyses and manuscripts are in progress.  The Core is also beginning work to create data presentations and reports for the upcoming Data and Safety Monitoring Board (DSMB) meeting in April. 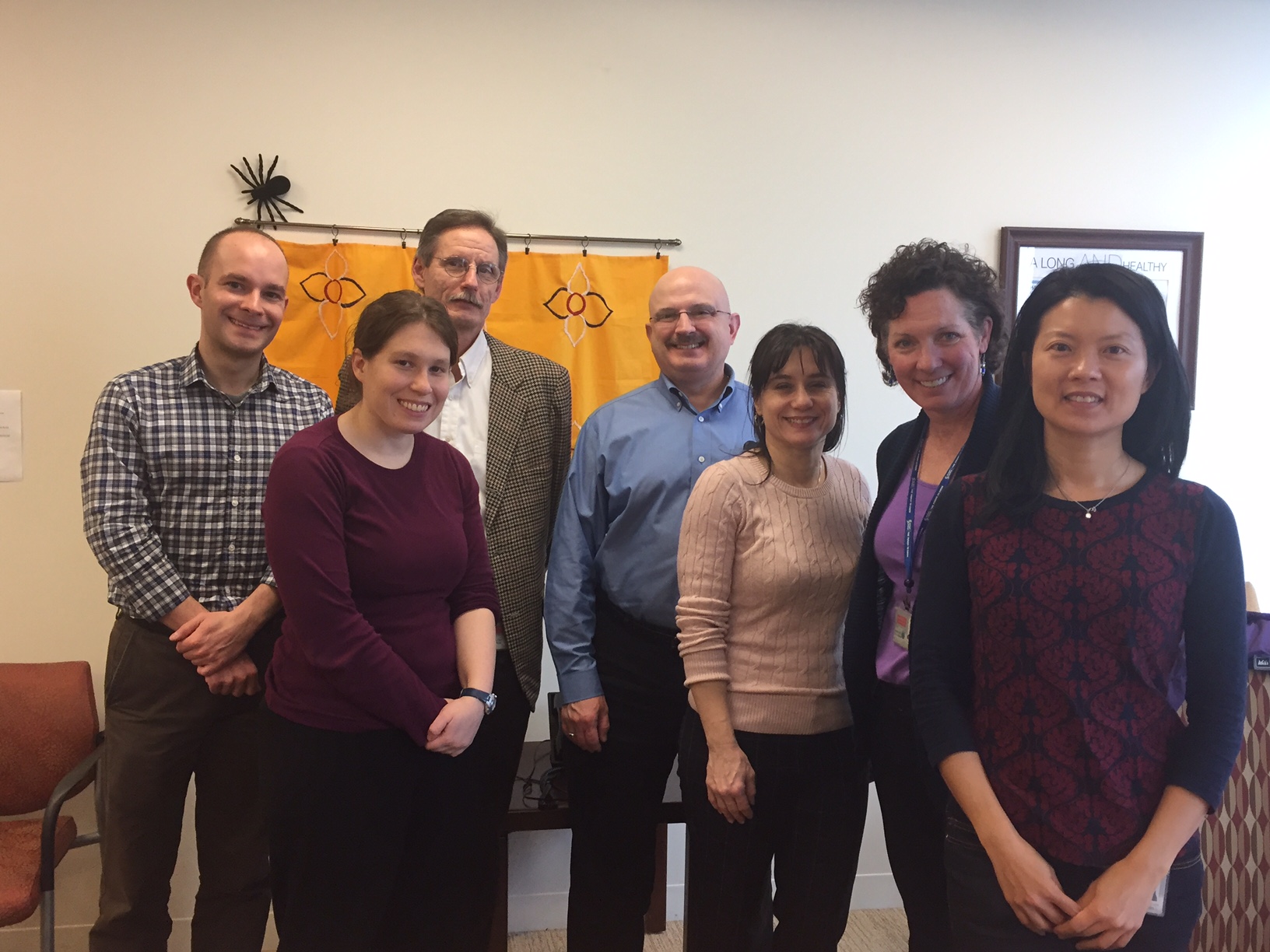 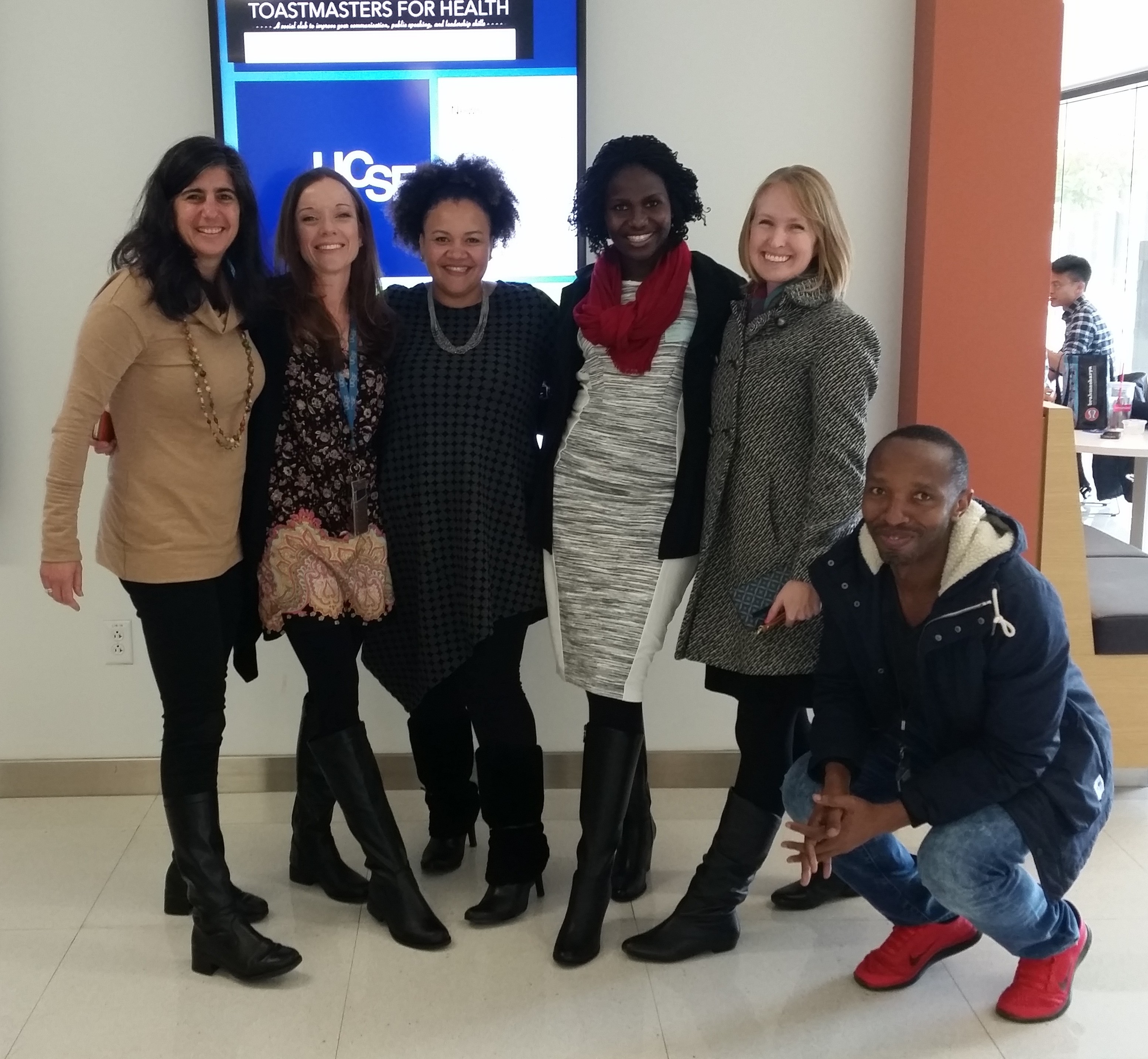 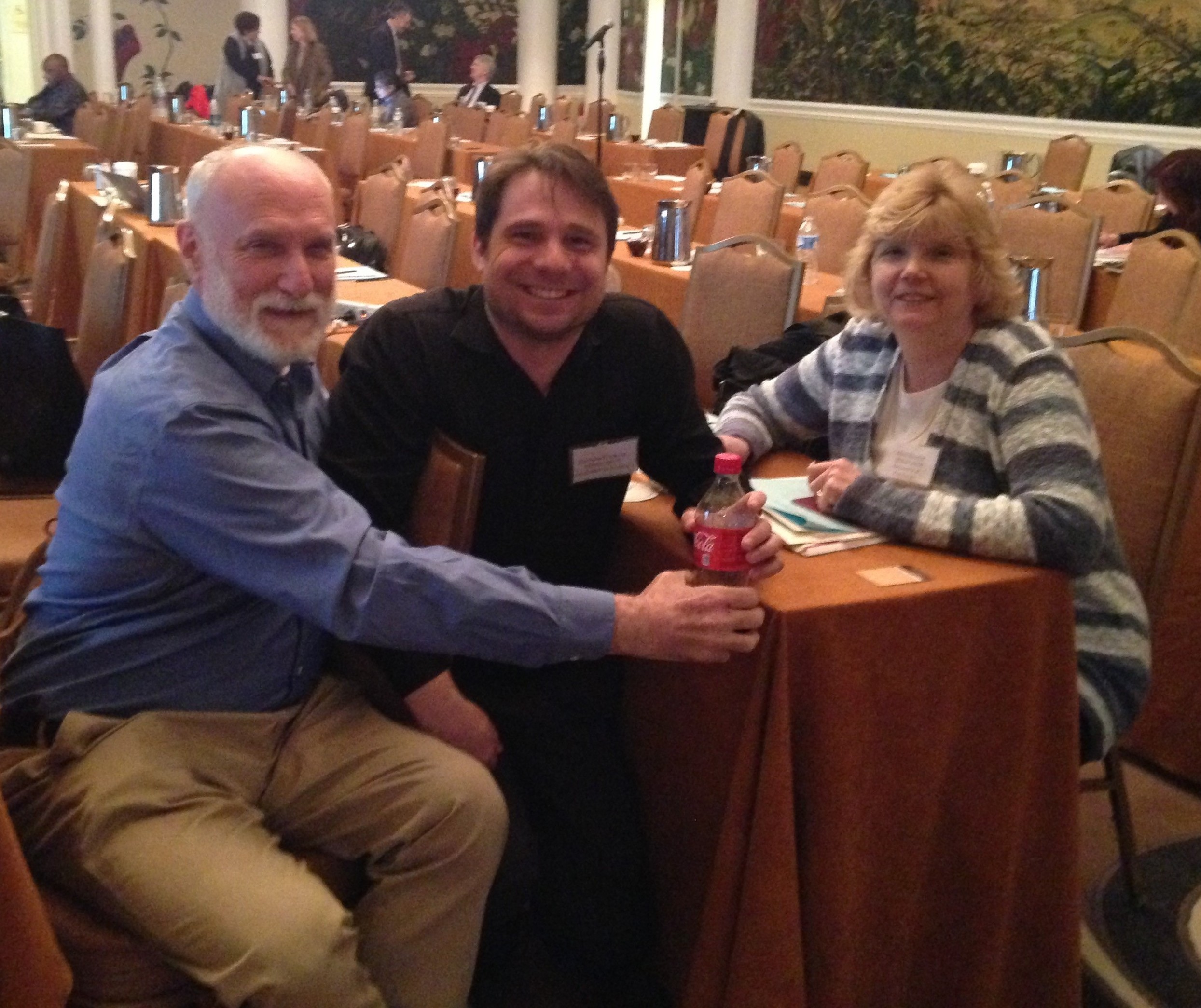 The team submitted their proposal for the Studying Partial-agonists for Ethanol and Tobacco Elimination in Russians with HIV (St PETER HIV) RCT as part of the URBAN ARCH grant renewal in January. The study will recruit HIV-infected smokers and heavy drinkers from the established Russia ARCH cohort to compare the effects of two nicotinic partial agonists, varenicline and cytisine, on alcohol consumption, alcohol craving, smoking, inflammation, CHD risk and mortality risk.

The team is actively pursuing data analyses, abstract submissions, and manuscript preparation. Over the last 3 months the following manuscripts were submitted for review: 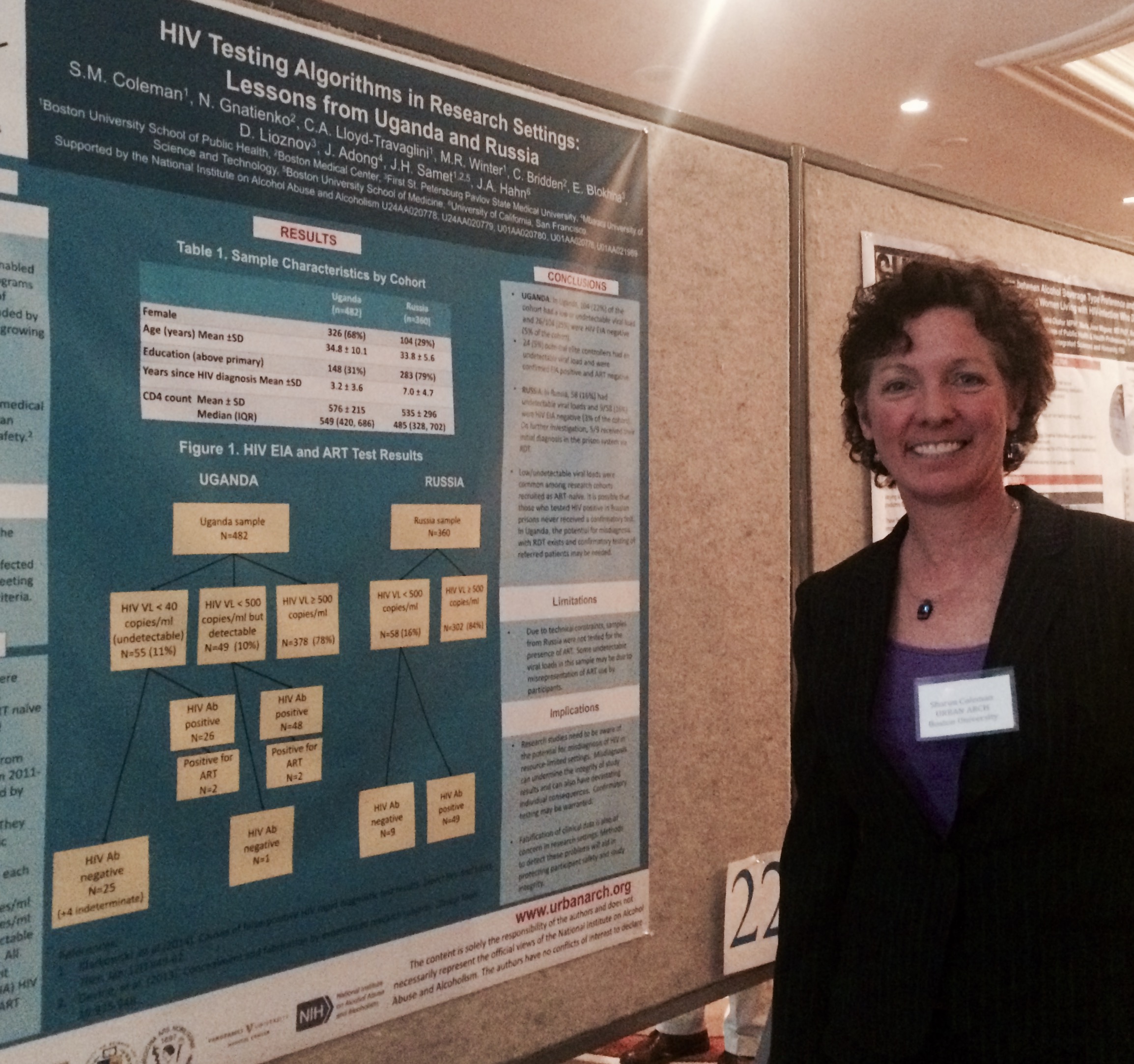 A number of study team members also presented posters at the 2016 CHAART meeting in in DC. 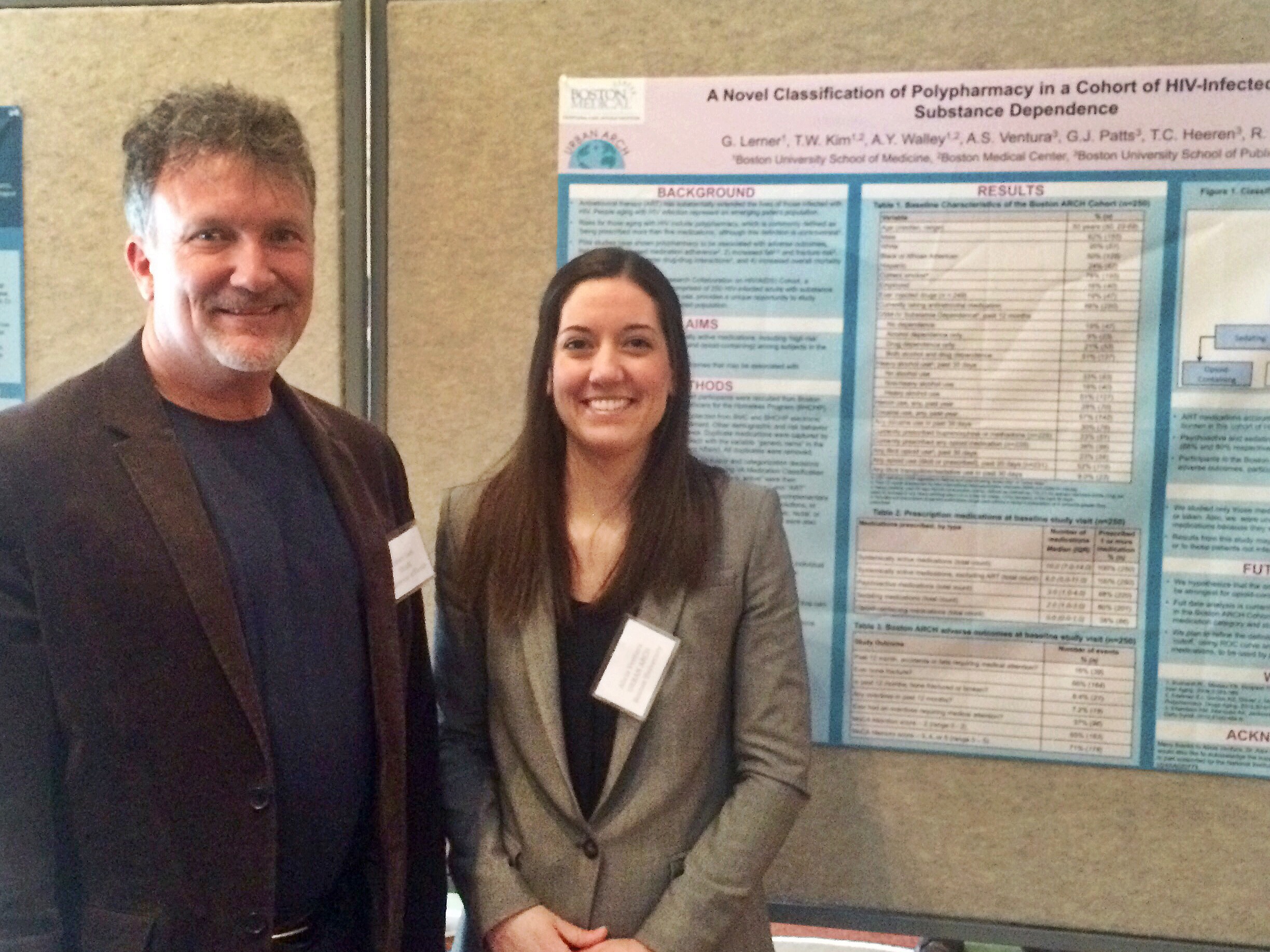 l-r: Bob Cook and Alicia Ventura at the CHAART Meeting in Washington D.C.

The Boston ARCH team successfully submitted a competitive renewal application to NIAAA, “Alcohol and HIV Associated Comorbidity and Complications: Frailty, Functional Impairment, Falls, and Fractures (the 4F study),” to continue and expand the existing cohort to better understand falls in people living with HIV.  In February 2016, Alicia Ventura, Boston ARCH Project Manager, traveled to Washington D.C. for the 2016 Collaborative Centers for HIV/AIDS and Alcohol Outcomes Research (CHAART) Scientific Meeting where she presented on the current status of Boston ARCH and the proposed 4F Study. 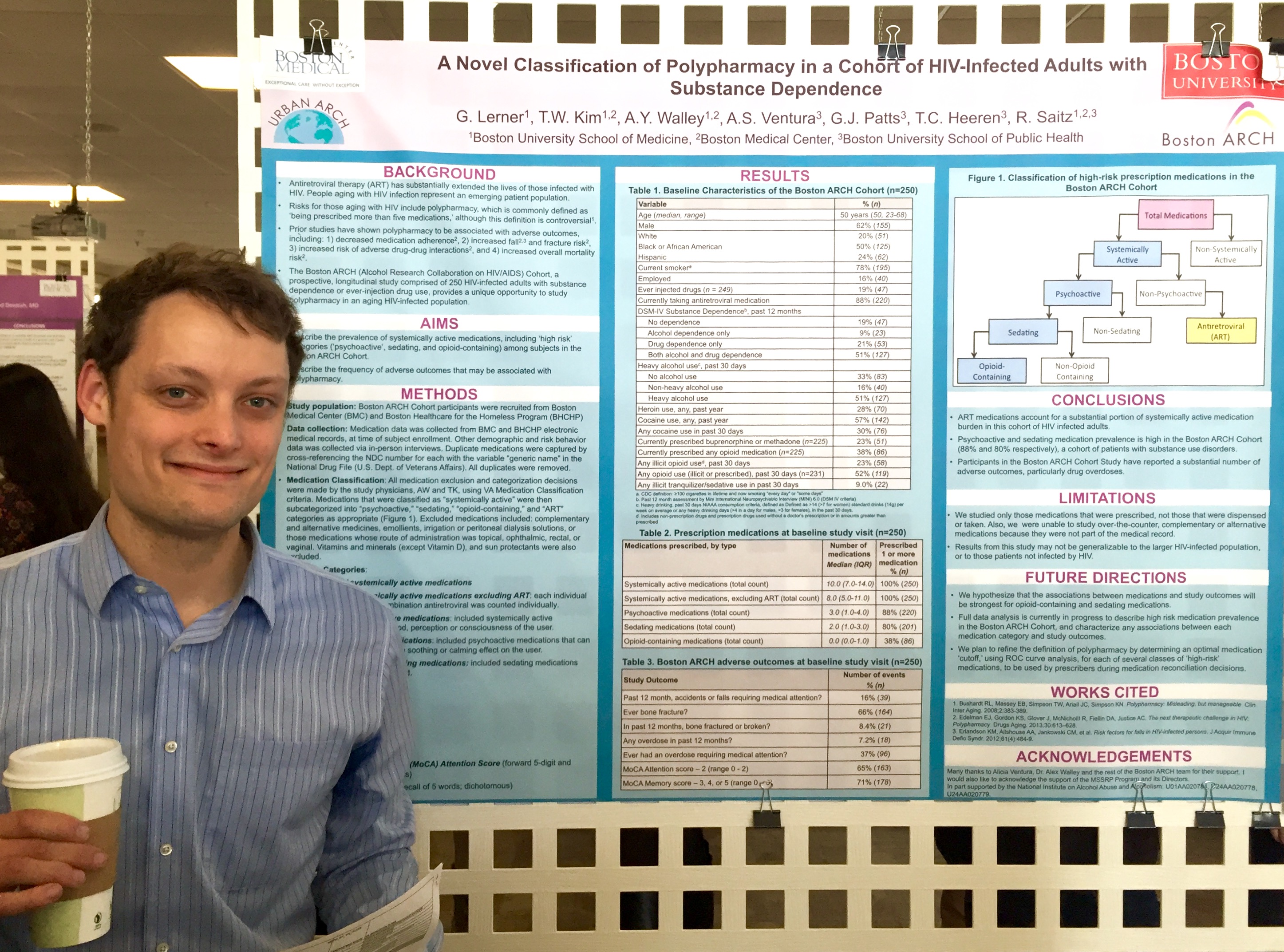 The Boston ARCH team and the BDM Core continue to work with a number of junior faculty, fellows and graduate students to support new analyses of Boston ARCH data, abstract submissions, and manuscript preparation. Several abstracts have been submitted, including to the CPDD 78th Annual Scientific Meeting and Society for General Internal Medicine’s Annual Meeting.  Gabriel Lerner’s poster “A Novel Classification of Polypharmacy in a Cohort of HIV-infected Adults with Substance Dependence” was presented at both the 2016 CHAART Scientific Meeting and also the Boston University Medical Student Summer Research Program Symposium on January 29th, where it was selected as a Runner Up for the Best Clinical Research Poster Award.

The team has received results from Q2 Solutions in Valencia, California from the first batch of testing for albumin, calcium, phosphorus, magnesium and free testosterone conducted on stored serum.