In collaboration with Dr. Philip Kennedy and colleagues at Neural Signals, Inc., we created the world’s first brain-computer interface for real-time speech generation in 2007. This system decoded neural signals recorded from an electrode implanted in the speech motor cortex of a human volunteer with locked-in syndrome (characterized by full consciousness with near-complete paralysis) while he imagined speaking. This work received widespread coverage in the popular media, including pieces by CNN, the Boston Globe, and Esquire Magazine. A schematic of the brain-computer interface is provided below; further details about the system can be found in Guenther et al. (2009). 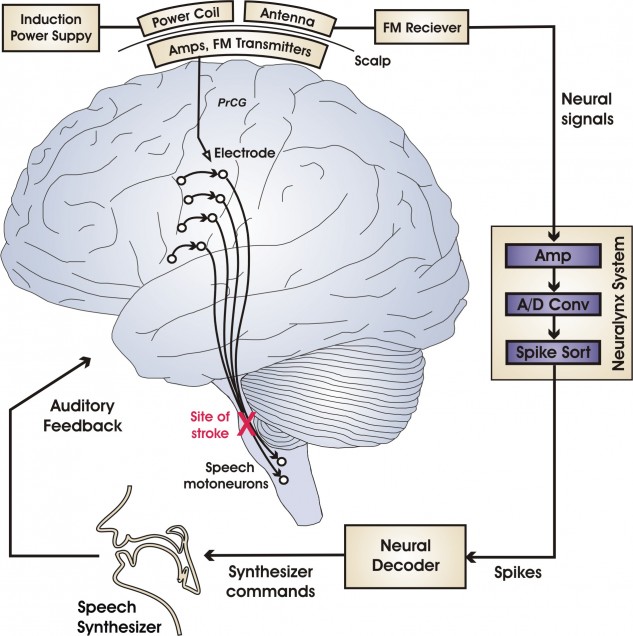 In more recent work, we developed a novel speech synthesizer that provides natural-sounding speech using a simple 2-dimensional input that can be generated via brain signals or muscle signals collected with electromyography (EMG). The video below, created by members of the Stepp Lab at Boston University, shows a user controlling this synthesizer via EMG signals from the face.

Podcast featuring Dr. Frank Guenther: Science Finally Has a Good Idea about Why We Stutter

Listen to this recently recorded podcast with Dr. Frank Guenther by Scientific...

“Did you know you could use brain computer interfaces to restore speech?” Professor Guenther’s recent talk at the Hariri Institute at BU.

Please enjoy this YouTube video of Prof. Guenther's recent talk for the...