Most of what is known about the neural processing of language and speech has come from studies involving fMRI, which has good spatial resolution but is limited in temporal resolution.  Because the dynamics and functional connections during speech are difficult to study using fMRI, electrocorticography (ECoG), with its finer temporal resolution, has the potential both to confirm existing theories and to uncover new functional relationships between brain areas. We are currently performing collaborative research investigating the speech network using ECoG in epilepsy patients using electrode grids and depth electrodes implanted for pre-surgical mapping. These collaborations involve the Dr. Gerwin Schalk of The Wadsworth Institute in Albany and Dr. Jeremy Greenlee of the  University of Iowa Hospitals and Clinics. We have also developed tools for investigating functional connectivity during speech (Stephen et al., 2014), and lab member Emily Stephen teamed with Eric Denovellis to create SpectraVis, an interactive visualization tool to display connectivity networks alongside the spectra and coherences of the underlying data. 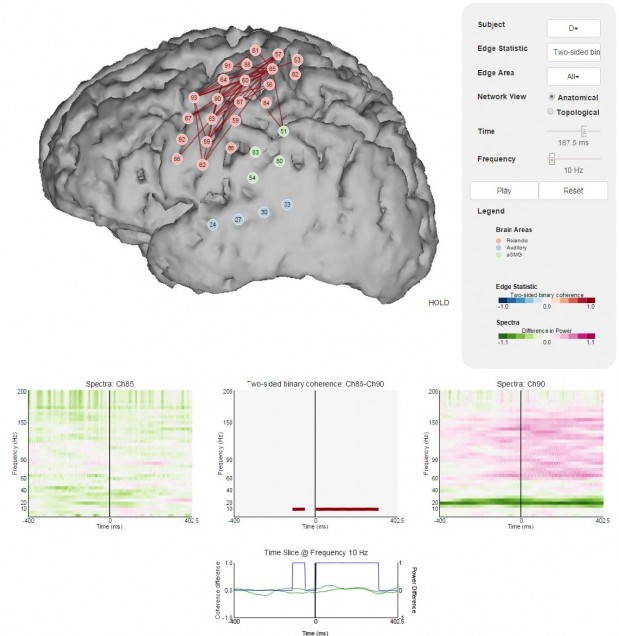 Screenshot from SpectraVis (adapted from Stephen, 2015).

Podcast featuring Dr. Frank Guenther: Science Finally Has a Good Idea about Why We Stutter

Listen to this recently recorded podcast with Dr. Frank Guenther by Scientific...

“Did you know you could use brain computer interfaces to restore speech?” Professor Guenther’s recent talk at the Hariri Institute at BU.

Please enjoy this YouTube video of Prof. Guenther's recent talk for the...