The Dark Side of Comedy

When the Boston University Communication Research Center was first organized in the late 1950s, some of its earliest research involved the study of comics.

Fears were so great in the U.S. about the potential harms of comic books on youth that Congress created a subcommittee to study their effects on juvenile delinquency.

Unlike the comics in books, newspapers, and magazines, a separate type of comics – the stand up kind – emerged as a phenomenon of study. Encompassed by the field of “humor studies,” researchers examined the psychological and physiological effects of humor – positive or negative – on individuals or groups of people. 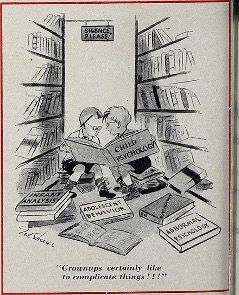 At this year’s Academy Awards ceremony, audiences witnessed the dark side of comedy when Best Actor nominee Will Smith assaulted comedian and awards host Chris Rock on stage after he ad-libbed a joke about the hairstyle of Smith’s wife, Jada Pinkett Smith.

Given that CRC Fellow Dr. Patrice Oppliger is an Executive Board Member and Past President of the International Society for Humor Studies – and has even co-edited a book called The Dark Side of Stand-Up Comedy – it seemed fitting to get her perspective on how communication research can help us understand this media spectacle. Oppliger told me, “In putting together our book, we framed the contributions from academics and professional comedians focusing on the communication model components: sender (comedian’s background), message (type of jokes), channel (venues), and receiver (audience reception).” She explained,

These factors can also be used to analyze the “Oscar slap” heard ‘round the world on March 27, 2022. Issues of race and gender complicate matters as do the backgrounds of the players involved. Will Smith’s PTSD from not being able to protect his mother from his abusive father and Jada Pinkett Smith’s battle with an autoimmune condition and the loss of her hair culminated in Smith slapping Rock after he joked about her resemblance to the title character of the 1997 film G.I. Jane.

Talk radio and social media have been rife with mansplaining/whitesplaining about how the joke was harmless. There is perhaps more to the joke given the history of the actors involved. Years earlier, Rock made a disparaging remark about Jada’s #OscarsSoWhite boycott of the 2016 Oscars, joking that she had not been invited in the first place. Rock noted the 2022 joke was “a nice one.” 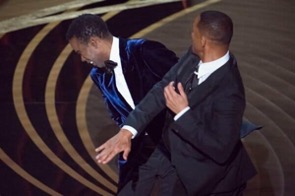 Aside from Netflix comedy specials, stand-up is generally performed in an intimate setting – in front of a live audience who have access to the performer. In The Dark Side of Stand-Up Comedy, we include stories of audience members attacking comics. Thus, assaults on stand-up comedians are not unprecedented. The juxtaposition of the Oscar slap highlights the difference between film comedy, where scripted lines go through several layers of editing, and the free-style stand-up stage (reports are that Rock improvised the line). There is also a tradition of roasting audience members at award shows. For example, earlier that night, Regina Hall made a humorous reference to Will and Jada’s open marriage. While her comment did not draw an assault from Smith, it may have primed his reaction.

Beyond the live audience (most of whom gave Smith a standing ovation after his Best Actor win), social media lit up with “Team Will,” “Team Chris,” and “Team Jada” tweets. The one-minute exchange presents fodder for academics and armchair analysts alike that will be debated for years to come.

Indeed, as evidenced from students in my CM180 “Understanding Media” class, their reception of the situation was decidedly mixed. We discussed the controversy on the day that the Academy of Motion Picture Arts and Sciences announced that Smith would be barred from attending the awards ceremony for 10 years because of his “harmful behavior.” When eliciting feedback from students, they shared the following observations:

Student A: “10 years is too much. That’s a little extreme. 1 year would have been better.”

Student B: “On the one hand, 10 years is a long time. On the other hand, if we do not give the situation a proper punishment, those who observed the violence conducted by Will Smith will think that it’s okay to use violence to solve problems.”

Student C: “Will other actors be treated the exact same…like, is this the standard going forward?”

Student D: “I think there’s other people the Academy should also ban. There’s people in the Academy who have committed domestic violence –who have been prosecuted – and are still there.”

As clearly demonstrated by Smith’s reception of Rock’s joke – and the mixed reception of audiences wide and far to Smith’s response – humor studies and communication research can offer nuanced insights into the effects of humor on individuals and groups of people.