Following the Playbook of Our Earliest Broadcasters

The continuing concerns about the spread of misinformation are at the forefront of news again in early 2022, engulfing celebrities Joe Rogan and Whoopi Goldberg and their employers.

In Rogan’s case, accusations of Covid-19 vaccine misinformation have dogged his “Joe Rogan Experience” podcast that is on the Spotify streaming service platform. Recent reporting indicates Spotify has paid Rogan at least $200 million to exclusively license his podcast. After inviting Dr. Robert Malone on his show – an aggrieved infectious-disease researcher who claims to be the inventor of mRNA vaccine technology yet has spread baseless conspiracy theories about the vaccines – a coalition of over 250 public health officials, scientists, and academics wrote an open letter to Spotify calling for it to mitigate the spread of misinformation on its platform. This was followed by several artists, led by Neil Young, requesting the removal of their music catalogs from Spotify if Rogan’s podcast was allowed to continue. In response, Spotify agreed to add “content advisory” warnings to virus-related content and Rogan stated he will try to offer a better balance of expert perspectives going forward.

In the case of Whoopi Goldberg, a co-host of ABC-TV’s talk show The View, it was a discussion about a school district banning the Pulitzer-prize winning Maus – a graphic novel about the Holocaust – that landed Goldberg in trouble. She repeatedly claimed that the Holocaust was not based upon racial hatred because it involved “two white groups of people.” Although she later apologized and conceded she was misinformed about the Holocaust, she was suspended for two weeks by ABC.

Like many professors, I have been examining these controversies with students in my “Understanding Media” course. Not only are 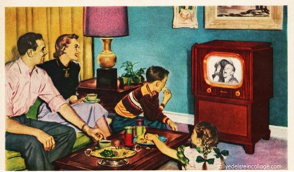 these cases instructive as examples of misinformation circulating beyond social media platforms, but they also serve as an entree to discuss limits of free expression and the gatekeeping obligations of private companies such as Spotify in contrast to broadcast networks, such as ABC (which is owned by The Walt Disney Company), and the stations that air ABC content.

To enrich our understanding of this last point, I turn to CRC Fellow Deborah L. Jaramillo who is an associate professor of film and television at COM. Based upon her expertise of the U.S. television industry’s historical attempts to censor its programs and regulate its business practices, she offered this perspective:

In 1950 a man wrote to television entertainer Arthur Godfrey, incensed at the risqué content in the previous week’s program. Godfrey’s “coarseness and vulgarity” had no place within earshot of the letter writer’s wife and daughter; indeed, the man demanded an apology from Godfrey, himself. This man was one of many who flooded networks, advertisers, stations, and government officials with complaints about this emerging medium called television. Struggles over content have only escalated since the first complaint letter reached the desks of government regulators, but U.S. media companies have clung rather successfully to a strategy employed since early radio and encouraged by the government, which cannot censor: self-regulation.

Many different stakeholders grappled with the perceived excesses of early television programming. Eager to keep the commercial system intact and alternative systems (like non-commercial and subscription TV) at bay, the National Association of Broadcasters, the networks, and advertisers drafted codes, standards, and editorial policies to manage programming. The 1952 Television Code, for example, propped up conservative values, policing content pertaining to religion, marriage, gender norms, and law enforcement. But it also prohibited content that demeaned people of different racial backgrounds, religions, and abilities. Stakeholders like the NAB wanted to ease TV into homes so that it complemented middle-class sensibilities and caused the least disruption to viewers’ spending habits. Although they seemed draconian and an affront to creative freedom, these self-regulatory maneuvers largely lacked teeth. For legal reasons, stations subscribed to the radio and TV codes voluntarily; violation of the codes could not trigger a license revocation. That was the FCC’s department. Nevertheless, self-regulatory efforts like industry codes and network censorship departments persisted. Simply put, they looked good. If a set of standards could convince the FCC and television reformers that broadcasting could be clean and serve the public interest—that broadcasters cared about viewers—then advertiser-supported television could become a normal part of household routines across the U.S.

As entertainment media have multiplied and platforms have proliferated, standards have relaxed, but they have not disappeared. From TV to streaming audio, media companies remain averse to government interference, and they still use these policies to convince the public and lawmakers that they are, at heart, ethical businesses that care about their audiences’ wellbeing—even if the material they harbor is out of step with social norms. That Spotify opted to release its content standards to the public in the wake of the Joe Rogan controversy demonstrates that public-facing codes are still believed to have currency, even if their efficacy is up for debate.

Content standards are not neutral; they uphold particular values and imagine particular audiences. Additionally, they are not and cannot be static; programs are cultural artifacts as much as they are industrial outputs, so they will always challenge efforts to contain them. Standards adapt to shifting norms and industrial circumstances, but they also bend according to the perceived value of talent, audiences, and media brands. High-profile creatives like Norman Lear and Steven Bochco were famous for negotiating with network censors to get boundary-pushing content on air. The cases of Joe Rogan at Spotify and Whoopi Goldberg at The View on ABC offer a set of circumstances decidedly different from Lear’s and Bochco’s, but they are emblematic of the tension between policing content and spurning high-performing talent. The swift, temporary suspension of Goldberg is unsurprising, given the reputation of network news, the historical relationship between news and the public interest, and broadcast stations’ proximity to government regulation. Spotify, by contrast, has no such history or proximity. It can more easily (but not without bad press) contort its standards to protect its earners, but it still follows the playbook of our earliest broadcasters. At the end of the day, neither the nearly 80-year old network nor the 16-year-old streaming platform opted to blow up their talent. We were instead treated to two versions of self-regulation that, when placed in historical context, demonstrate that legacy media and new media have more in common than we might think.

As self regulation continues to dominate in controlling U.S. media content, two cautionary tales are worth noting. Despite often lacking teeth, as Jaramillo writes, self regulation led to the deplatforming of Father Coughlin in 1940 from his long-running syndicated radio show. With his anti-Semitic proselytizing, Coughlin was considered “an enemy of democracy, a disciple of fascism, an advocate of violence, and a purveyor of racial hatred.” Out of fear of losing their broadcast licenses due to “purposeful untruths that debase radio as an instrument of racial or religious persecution,” the National Association of Broadcasters (NAB) strengthened its Code of Ethics in 1939 prohibiting the sale of airtime for divisive political or religious commentary. Under threat from the Federal Communications Commission and concern about losing authority among member stations, the NAB proceeded with the messy task of pressuring stations – some of which were resistant – to voluntarily terminate their business relationships with Coughlin.

More recently was the deplatforming of the then-president of the United States, Donald J. Trump, from Twitter for violating its “Civic Integrity” policies by inciting violence related to the January 6, 2021, storming of the U.S. Capitol. Other social media platforms followed Twitter’s lead.

In both cases, it was ultimately the apparent threats to democracy where media companies took the extreme measures of blowing up their talent. Will contemporary media companies such as Spotify continue to follow the broadcaster playbook? Our fellows will be watching and listening.