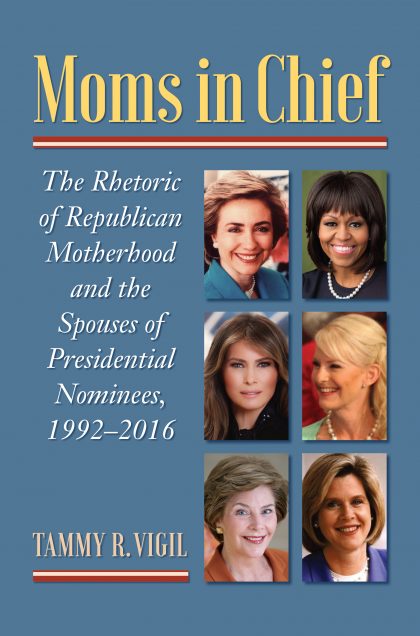 Closely examining the ways in which the spouses of recent presidential candidates have been presented to and perceived by the American public, CRC research fellow Tammy R. Vigil’s new book Moms in Chief: The Rhetoric of Republican Motherhood and the Spouses of Presidential Nominees, 1992-2016 takes a critical look at gendered political roles and how they (for better or worse) shape the concept of American womanhood.

“Established gender norms, paired with a deep partisan divide, make it difficult for candidates’ spouses to embrace the full complexities of their own identities due to the fear of possibly alienating segments of the population and costing their mate valuable votes,” explains Vigil in a Q&A with the University Press of Kansas blog.

When interviewed by BU Today ,Vigil explained that today’s presidential spouses have a lot in common with ancient Sparta. “It makes sense. They’re being looked at as wives because they are married to the nominee. But when I started looking through that lens, it really explained why people as diverse as Elizabeth Dole and Cindy McCain were embracing this idea of: Look at me, I’m the deferential wife and I’m the good mother. Elizabeth Dole didn’t even have kids and she was still playing that sort of role.”

In particular, Vigil dissects the ideology of “republican motherhood”—which upholds the traditional ideal of a subservient, domestic, self-sacrificing “female patriot”—and analyzes how this limited public imagining restricts women’s autonomy as citizens independent from their male partners. Regardless of where on the political spectrum their spouses’ politics may fall, Vigil says, wives of presidential candidates have all been held to this stereotypical standard.

“Unless reporters and campaign strategists expand their perceptions of the spouses (particularly wives), the coverage of candidates’ mates will likely remain as it has for the past several decades,” Vigil explains. “Wives will be expected to conform to traditional gender norms and will be evaluated based on their ability and willingness to meet these conventional expectations.”

Update, September 8, 2019: An excerpt from Moms in Chief was featured on The Daily Beast, link