Revisiting early debates about TV content and censorship from industry and government perspectives, The Television Code: Regulating the Screen to Safeguard the Industry recounts the development of the Television Code, the TV counterpart to the Hays Motion Picture Production Code. 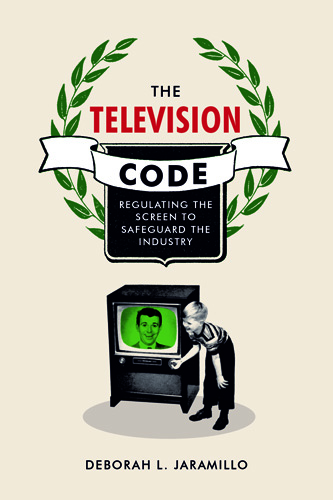 The broadcasting industry’s trade association, the National Association of Broadcasters (NAB), sought to sanitize television content via its self-regulatory document, the Television Code. The Code covered everything from the stories, images, and sounds of TV programs (no profanity, illicit sex and drinking, negative portrayals of family life and law enforcement officials, or irreverence for God and religion) to the allowable number of commercial minutes per hour of programming. It mandated that broadcasters make time for religious programming and discouraged them from charging for it. And it called for tasteful and accurate coverage of news, public events, and controversial issues.

Using archival documents from the Federal Communications Commission, NBC, the NAB, and a television reformer, Senator William Benton, this book explores the run-up to the adoption of the 1952 Television Code from the perspectives of the government, TV viewers, local broadcasters, national networks, and the industry’s trade association. Dr. Deborah Jaramillo analyzes the competing motives and agendas of each of these groups as she builds a convincing case that the NAB actually developed the Television Code to protect commercial television from reformers who wanted more educational programming, as well as from advocates of subscription television, an alternative distribution model. By agreeing to self-censor content that viewers, local stations, and politicians found objectionable, Dr. Jaramillo concludes, the NAB helped to ensure that commercial broadcast television would remain the dominant model for decades to come.

About the Author
Deborah L. Jaramillo is an associate professor of television studies at Boston University. She is the author of Ugly War, Pretty Package: How CNN and FOX News Made the Invasion of Iraq High Concept.