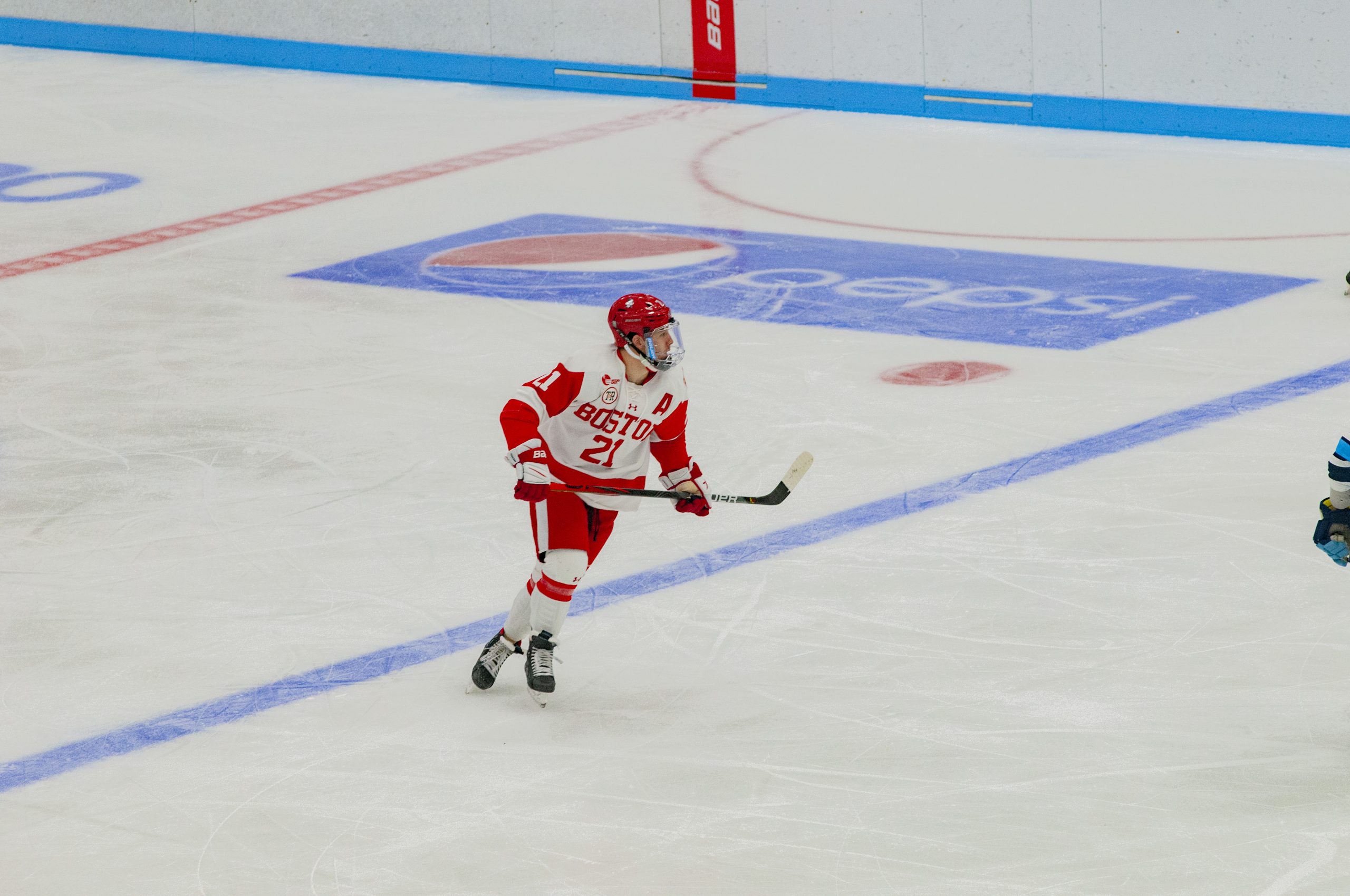 STORRS, C.T. – The No. 11/12 Boston University Terriers (9-2) came back to defeat the University of Connecticut Huskies (8-9-2) in overtime on Saturday night.

“We didn’t get off to the greatest starts, but we just kept on getting better as the game went on,” O’Connell said. “Overall I thought it was an unbelievably hard fought game.”

“I thought in that second and third period we played a lot better than the first.”

Freshman goaltender Vinny Duplessis got the start for BU, making 27 saves on 29 shots. Junior Tomas Vomacka went in goal for the Huskies, stopping 28 of 31 shots.

Duplessis was the only goaltender available for the Terriers, as sophomore Ashton Abel was unable to suit up after slipping on ice earlier in the week, according to O’Connell. Abel’s absence explains why Friday’s game between UConn and BU was not played.

O’Connell was appreciative of the flexibility that allowed BU to play just one game.

“We want to thank UConn, thank the league and thank the administrations for allowing us to play the one game,” he said. “It’s not very conventional, having one goalie in net.”

Despite the peculiar circumstances, O’Connell thought Duplessis stepped up admirably for BU, winning his fourth straight start to begin his collegiate career.

“He played another terrific game, and he really managed the game well,” O’Connell said. “He was a big factor, and he’s off to a terrific start.”

UConn got the scoring started early, about 90 seconds into the proceedings.

Sophomore defenseman Carter Berger took the puck at the point, and looked to change his shooting angle, dashing down the left wing. He sent a wrist shot towards Duplessis, and it ricocheted off junior forward Carter Turnbull in front before tumbling into the net, giving the Huskies a 1-0 lead.

The Huskies strike early as Carter Berger has his shot deflected and in for his 1st on the year. #IceBus pic.twitter.com/NAvCSgcGIl

With just under five minutes remaining in the first, UConn doubled their lead.

Senior forward Brian Rigali skated down the right half-wall and looked to pass in front. The puck took a bounce off BU freshman blueliner Cade Webber’s skate. Duplessis barely got a piece of the puck, but it was not enough as the puck trickled in to give the Huskies a 2-0 margin.

BU found a response after Rigali’s tally, and late in the first, the Terriers found an answer.

Senior captain and forward Logan Cockerill sent the puck to graduate forward Max Kaufman. Kaufman swiveled the puck to sophomore forward Jay O’Brien, who was streaking down the slot. O’Brien put the moves on Vomacka, going forehand-backhand to finish the chance and pull BU back within one with 51 seconds left in the first.

The goal was O’Brien’s team-leading seventh of the year.

O’Connell said the late tally was instrumental in BU being able to mount a comeback.

“It’s enormous,” he said. “Whenever you can score in the last minute or last couple minutes of a period, it gives you a little bit more momentum.”

The second period did not see anymore offense from either side, but the physicality certainly intensified.

About 2:30 into the period, freshman forward Nick Zabaneh wheeled around the goal and fired towards Vomacka, who made the save. After the shot, UConn junior forward Kale Howarth hit Zabaneh from behind, sending Zabaneh’s helmet flying as he fell and hit his head off the ice.

Howarth was assessed a five-minute major for roughing and a game misconduct.

BU failed to capitalize on the opportunity before O’Brien’s goaltender interference penalty made it four-on-four for the remainder of the major penalty. The Huskies squandered their brief man-advantage following the major.

UConn did not cash in on another power play opportunity before the end of the middle stanza as the two teams headed to the locker room.

Nick Zabaneh is taken out by UConn's Kale Howarth, who gets a game misconduct. Markus Boguslavsky responds. BU to the power play for 5 minutes. 2-1, UConn. #BUvsUConn pic.twitter.com/jwb4lJFWaH

O’Connell thought the Terriers brought more intensity as the game went on, but there is still room for improvement.

“I thought our physicality picked up,” he said. “I thought it was sporadic for the night. We can be better in that area.”

The Terriers and Huskies continued to trade penalties at the start of the third period, but neither team capitalized.

Late in regulation with 6:01 remaining, BU finally found the equalizer.

Webber made a strong pinch on the wall in the offensive zone, helping Cockerill win a puck battle. Cockerill took the puck towards the left corner and dished to Kaufman, who found open space in the slot. The graduate forward blasted a one-timer past Vomacka to make it 2-2.

BU GOAL: Max Kaufman scores his first as a Terrier. Cockerill finds Kaufman in the slot, and he blasts it home. 2-2 with 6:01 remaining in regulation. #BUvsUConn pic.twitter.com/cerxHdMLQO

Kaufman has been a revelation for the Terriers this season, coming in from Vermont as a graduate transfer and being voted as an assistant captain by his teammates. O’Connell said it was nice to see him get rewarded with his first as a Terrier.

“[Kaufman] is a leader,” O’Connell said. “He works extremely hard. He’s a professional in how he gets himself ready to play, so we’re very fortunate to have him.”

With 2:13 remaining in the third, a pair of penalties meant four-on-four before Rigali took a tripping penalty with 1:17 left in regulation. BU could not capitalize on their brief four-on-three advantage, but had 43 seconds of power play time to start overtime.

Early in the extra frame, the Huskies got a two-on-one opportunity, but could not get a shot on net.

On the counter rush, the Terriers sealed the comeback.

Cockerill walked into the offensive zone and dropped the puck off to Tuch. The frosh centered himself in the slot and roofed a shot over Vomacka to win the game, 3-2, just 43 seconds into overtime.

“That line all of a sudden has been a major difference maker, so it’s nice to get a one line consistently doing some major work there,” he said.

The Terriers will likely return to action next week, and will learn who their next opponent is on Tuesday afternoon as the league has reverted to creating the schedule on a week-by-week basis.