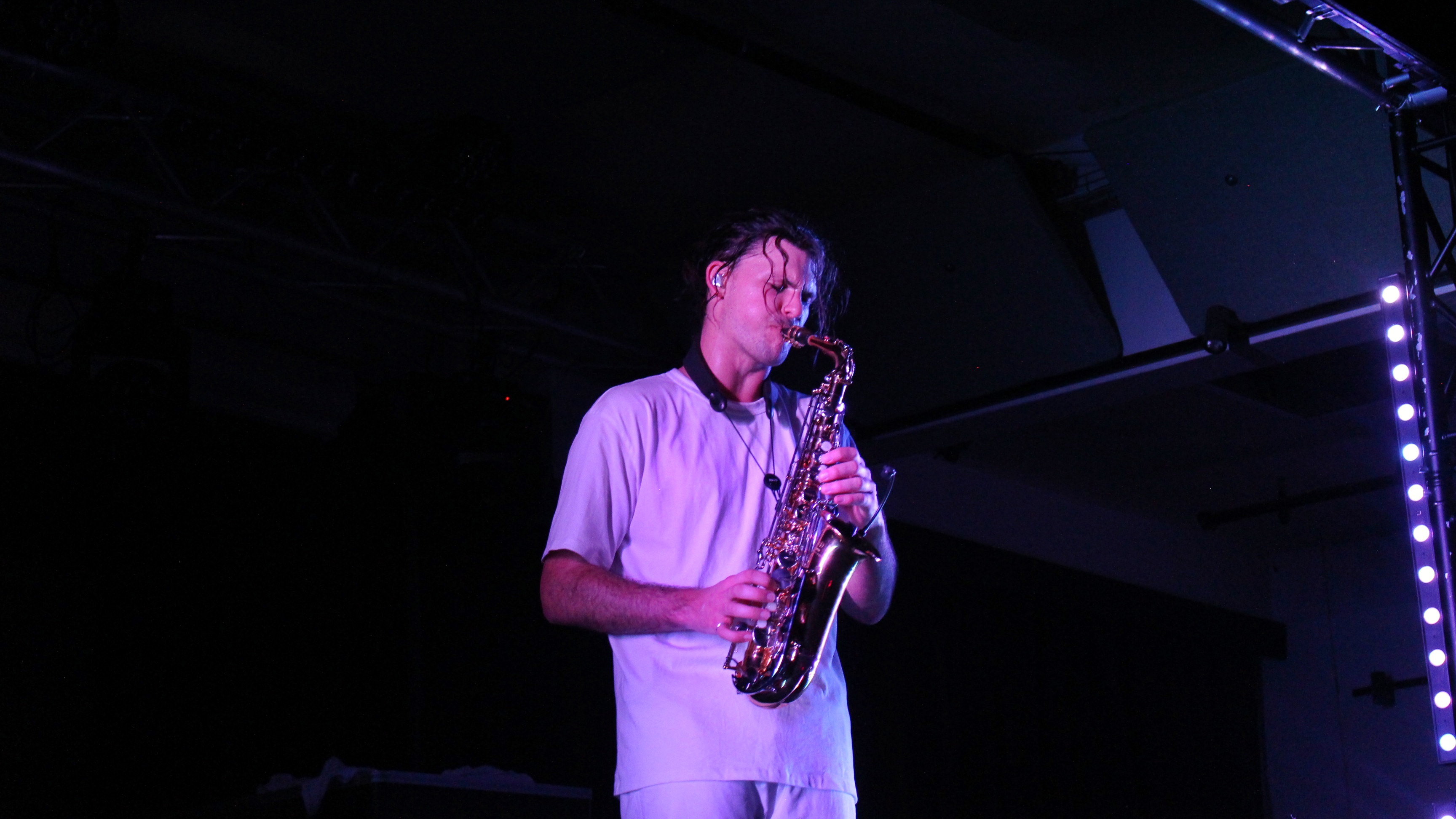 WTBU DJ and photographer Shereen Kheradyar talked to Jock Nowell-Usticke, also known as BAYNK, on Thursday, February 20th at Sonia in Boston for his “A Study in Movement” tour. BAYNK is a multifaceted musical artist taking the electronic genre by storm.

Shereen Kheradyar: How are you doing? How has tour been?

BAYNK: Tour is good! How long has it been now- like three weeks? A lot of fun. Some places I’ve never been before, like Texas, which has been really sick. And some really cool rooms that I’ve always dreamed about doing on the East Coast. Like Regency Ballroom, El Rey, stuff like that.

S: Were you always set on doing music or was there a moment where you finally pushed yourself to fully dive into it?

B: I think it was when my university finished. So I was at college and I studied chemical engineering for four years and I finished that. And then when I was like 21, 22, and I got out of college, I was just applying for jobs and none of them looked like something I could see myself doing for a long time. So I just really started making a song every day as soon as I got out of college. I kind of gave up maybe six months into that and then went traveling. My music got found whilst I was on the on the road- just like the one song that I put out. I’d kind of given up though. I was just super lucky that someone found my music and gave me a little bit of recognition because I think I was just super disheartened that no one listened to it, zero plays. And then, I really started like as soon as I got my first festival offer and booking agent, that was when I was like, okay, I can cut my normal job hours. Work half on this and half on music and see where it takes me from there.

S: That’s incredible! Do you have a source of inspiration when it comes to music or is there anything unexpected that influences your music?

B: They are always unexpected. It’s hard to explain what something unexpected is. It’s different every time. It would just be like random stuff. Like I didn’t start writing lyrics for a long time. So if I’m ever writing lyrics or in a session, I’m always thinking about experiences I had when I was a kid. And my experiences with love and relationships because I’ve been in a steady relationship for like three or four years now. I’m happy, but, you know, I love my girlfriend so nothing really crazy ever happens in our relationship like heartbreak or some things that happened to me when I was a kid, when I wasn’t writing music. So a lot of past experiences or things that happened to my friends. Even talking with these guys on the road and just hearing about what’s happening in their lives or friends from back home. I’ll be sitting in the studio and whatever sound has decided to like come out that day will trigger memories from those conversations or movies I’ve seen or just the weirdest stuff. But yeah, it’s all pretty inexplicable.

S: Do you have a favorite song that you’ve created? If so, why?

B: I love collaborating, but I think I quite often love the songs that I make fully myself. I don’t know. I’m just super proud of when something like that pops out like this all the way me. I really love HIGH at the moment, it’s a single I put out like two months ago. But then I also love DOWN, DOWN is my favorite at the moment. I didn’t make it myself, I made that with Golden Vessel and Akurei when I was on tour with them last year. They were opening up for me and then we made that song together at the end of the tour. It’s just such a fun song to play live. It’s like three of us on a song. It’s cool. It’s just weird having like three people a song for me because usually when I’ve done music it’s just been one person.

S: What do you hope people get out of listening to your music? or do you ever have a certain intention or mood for a song?

S: What has been the most memorable show or memory since you started touring?

B: Probably the San Francisco show at the Regency Ballroom. It was just the biggest show I’ve played so far this tour. And I think people just love electronic music there. They’re so accepting– I really love San Francisco. Other obvious ones are like Coachella and Lollapalooza. I nearly fainted. Both of those are fun because it’s a cool festival but headline shows are more rewarding.

S: What do you spend your time doing when you’re not touring or you have a day off?

B: If it’s an average day I like running, probably go for a run but I have shin splints at the moment from dancing so I can’t do that. Quite often go skiing, there are some good mountains around us–maybe do that once every two weeks. I like reading. I’m trying to teach myself how to skate because I want to do a kickflip really bad, but I’m too tall. Maybe once my body recovers from tour. Those are the things I’m doing at the moment. Apart from that, most of my hobbies, sort of fit into being an artist, like photography, videography, and making music, obviously. That has been the goal the whole time–just trying to fit everything I’m interested in into the BAYNK sphere.

S:What’s your writing process like and how does producing your own music influence that?

B: Yeah. It fully influences it. I usually don’t tend to think of things I want to talk about before I’ve written the music. So the music always comes first for me and then the lyrics can come fast or not at all. Sometimes it never comes so it’s just an instrumental track. I released some of those before. It’s fully depending on how the song makes me feel and what memories and emotions are triggered.

S: If you could collaborate with any artist, who would it be?

S: Who have you been listening to lately, yourself?

B: So Chloe Kae, she’s got a two-track E.P. that I really love. Both my friends who are on tour with me are from London, so I always get so excited when they come over because they always have the hottest UK stuff. So I’ve been listening to a lot of Afrobeats, like Burna Boy, Dave. So just like rappers and hip hop. And then, I always listen to a lot of the 1975, Rex Orange County. So whenever I go on stage to get rid of anxiety or nerves I always have like one or two songs and one of them is always a Rex Orange County song. Now it’s 10/10, it used to be Loving is Easy. Also KAYTRANADA’s new album.

S: So you’re originally from New Zealand, what has the transition been like from like the music scene/industry there versus the U.S. or L.A.?

B: It’s so different. I never really got into it over there because I kind of just moved to L.A. straight away. I just thought there’s no other time in my life that I’ll be able to do this, so I might as well just say, go 100 percent. I just moved before I really had any street cred, or anything. So I don’t really know what it’s like in New Zealand, honestly. L.A. is cool– I got people that’ll be like “Do you want to write songs?” and if they do they say yes and if they don’t then I’ll tell my manager to talk to their manager and try to sort it out. Yeah, I write a lot by myself unless it’s people that really want to write with or I’m in a rut. You know? I love to write with other people because you just get out of your own head and you have someone else there to do things so you can be like, “Oh that’s sick! I wouldn’t have thought of that.”

S: Is there anything new we can expect in the near future or anything you’re working on right now?

B: Oh, yeah. So, two parts of a four track E.P. have dropped already and there’s two more to come. There are three more music videos to come, so there’s a music video for every song. It’s a visual project called A Study In Movement. It’s basically four different dancers and why do they dance differently? Like what things or cultural phenomenons in their lives influence the way they move to the same song. You just see how each of them approach it. I don’t know why I decided to do this. It just interested me. I really wanted to do something that was more focused on just visuals. And then I wanted the music to fit the visuals in the video. I love making videos as well.