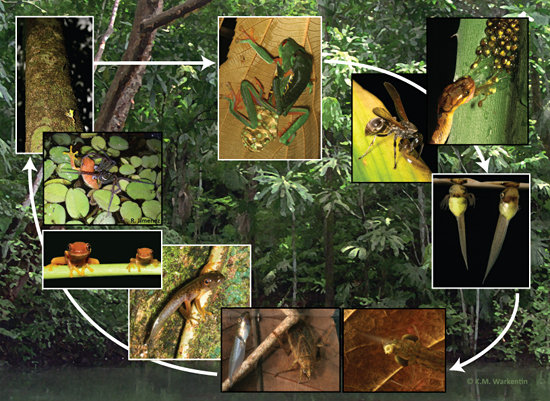 Red-eyed treefrogs live in low to mid-elevation rainforests from the Yucatan to Colombia. In the rainy season, males come to ponds and establish territories in plants near the water. They defend their territories and compete with other males by calling, shaking the plants, and fighting. When it rains, females carrying eggs come to the ponds to choose a mate. The pairs lay eggs on plants hanging over the water and tadpoles fall into the water upon hatching. Eggs in the trees can be eaten by wasps, snakes, or katydids, or killed by pathogenic fungus. They can also drown, if they fall into the water, or die from dehydration if the weather is too dry. Embryos can hatch early to escape from attacks by egg predators and pathogens, or in response to abiotic threats, but they typically hatch later if undisturbed. Thus tadpoles enter the water at different ages, sizes and stages of development. Tadpoles are eaten by many aquatic predators, including dragonfly nymphs, giant water bugs, freshwater shrimp, and fishes. Tadpoles that were induced to hatch early are more likely to be killed by aquatic predators and less likely to survive to metamorphosis. After a month or more in the water, the tadpoles metamorphose into froglets. Froglet size varies a lot, depending on conditions in the pond. So does their shape when they leave the water; metamorphs emerge with longer tails in response to water bugs. On land, froglets face a new set of predators, including semi-terrestrial spiders. Metamorphs on land remain relatively inactive near the pond while they absorb their tails, then climb up into the trees and disappear. We know very little about their lives as juveniles. 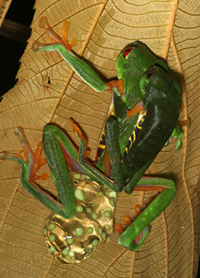 Red-eyed treefrogs lay eggs at night. Most eggs are laid between about 10 pm and 2 am, although this varies with the weather. The female provides the embryos with a large amount of water, in the egg jelly. She usually breaks the eggs she is carrying into several egg masses or clutches, taking time to absorb more water in between laying each set of eggs. Egg color varies among females, and is affected by their diet, but  it is consistent within the set of eggs laid by a female on the same night. This can be used to distinguish egg masses that could be siblings (same color) from those that are clearly not siblings (different colors). The photos below are from several different clutches. 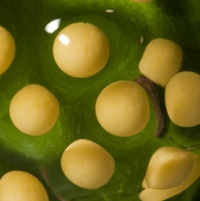 By morning, early cleavage is well underway and individual cells are visible at the top of each egg. The large mass of yolk at the bottom is not yet divided. Individual eggs are surrounded by relatively thick layers of jelly, and embedded at different levels in the overall clutch structure. 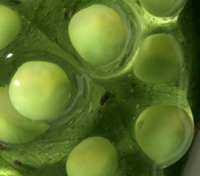 During the evening and night, embryos progress through later cleavage stages and early gastrulation stages. By morning, gastrulation is almost complete, with just a small yolk plug remaining. This is often hard to see, as it usually points toward the interior of the clutch, but is visible in the bottom right egg. Note the “two-toned” look, with the animal pole (up) and vegetal pole (down), which is distinct from the more uniform color of newly laid eggs. 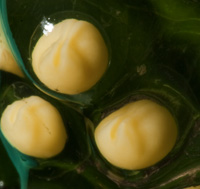 Here, neural folds have formed. The embryos now float freely in the perivitelline fluid within their capsule with the heavier yolk down and developing embryo up, however the clutch is positioned. 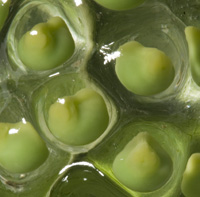 The neural folds have closed to form the neural tube and the developing head is more apparent, with gill plates forming. At this stage, embryos keep their proto-head toward the air-exposed surface, where there is more oxygen, and put their developing tail toward the back. If displaced, they will use ciliary rotation to return to this position. 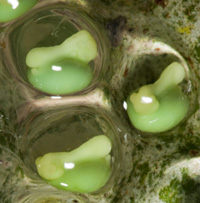 By evening, embryos have reached the tailbud stage. The perivitelline space inside the egg is larger, and the jelly layer around each egg is thinner. 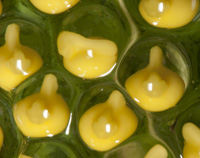 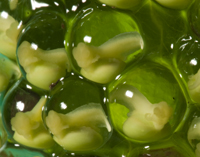 At age 2 days, embryos become more active. Their tails are curled to the side and they will twitch or squirm if disturbed (e.g. sprayed with water). Their hearts begin to beat and their gills are forming but initially their blood is not red. The clutch structure has changed, so individual eggs, with little surrounding jelly are at the surface, attached to an underlying jelly core. 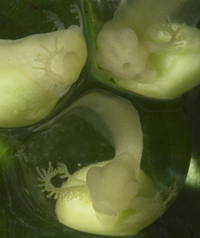 Later in the day, the gills are longer with distinct (but short) branches and pale blood cells can be seen circulating through them. The eyes are becoming distinct but have little pigment. 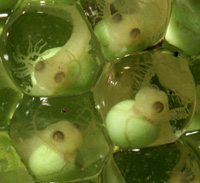 In the morning at age 3 days, the eyes appear grey, with melanophores on the iris in an incomplete circle. The lens of the eye is still cloudy. Gill branches are elongate and blood is pale red. There are scattered melanophores on the tail fin and part-way down the belly, but no pigmentation over the heart. The yolk is bulbous, with prominent superficial blood vessels. 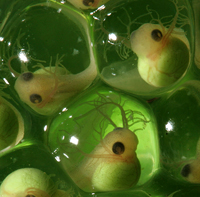 By evening at 3 days old, there is tail fin circulation. More obvious though, is the much darker pigmentation of the eyes and  brighter red blood. There are scattered  melanophores across the heart. Gill branches are continuing to elongate. 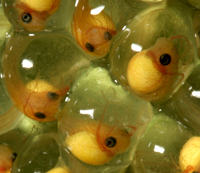 By the morning at age 4 days, embryos have scattered shiny iridophores on the iris and over the heart. Overall, they are more darkly pigmented than at 3 d, and their yolk is less bulbous. Blood vessels are still prominent in the yolk sac, but show more branching. 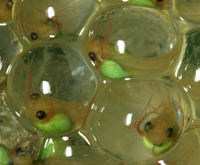 At 4 days, embryos begin responding to predator attack by hatching, although escape rates are quite variable from clutch to clutch. All embryos hatch (eventually) if flooded. Individuals may wait an hour or more, but none drown. 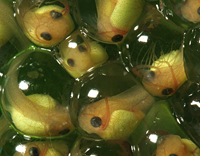 Embryos are packed closely together in egg clutches and oxygen only enters through the air-exposed surface. Embryos that are at least 15% exposed do fine, but those mostly buried under their siblings (upper left) develop more slowly. 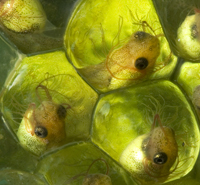 At 5 days old, dense iridophores cover the iris and heart, and melanophores are abundant on the sides and belly. The yolk is more streamlined, but undivided, and blood vessels are inconspicuous. Beaks begin to keratinize. Embryos hatch readily if attacked by wasps or snakes, with ~80% escape rates, but rarely hatch if undisturbed. 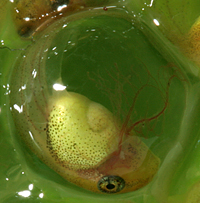 At age 6 d the yolk is divided into gut coils. The gut is packed full of yolk, so animals have substantial energy reserves and they cannot feed immediately upon hatching. 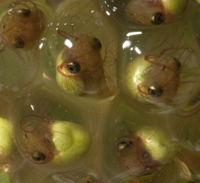 Mouthparts are more strongly keratinized and overall pigmentation is darker (melanophores) and shinier (iridophores). At this point embryos are highly sensitive to disturbance and more difficult to handle without inducing hatching although, if undisturbed, many will not hatch until the evening they are 7 (almost 8) days old. 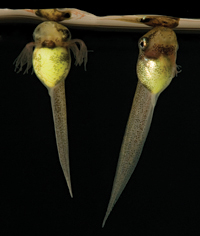 Tadpoles that hatched near the onset of hatching competence (4 d, left) enter the water smaller and less developed than those hatching later. Most undisturbed embryos hatch at 6 d (right) or 7 d.Photographic guide to development of A. callidryas, with stages according to Gosner 1960 and Pyburn 1963 (Texas J Sci 15:155-170). This was compiled from images of multiple clutches in Gamboa, Panama, and shows some of the variation in development at a given age.