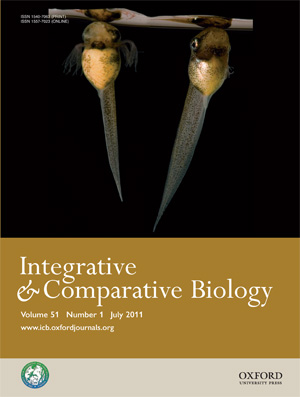 Since the initial discoveries of predator effects on hatching timing (Sih & Moore 1993, Warkentin 1995) we have learned that embryos of many species change when they hatch in response to environmental conditions. Some hatch early to escape from predators, pathogens, or abiotic threats. Some delay hatching in response to larval predators, abiotic threats, or lack of larval food. Parents also cue and manipulate offspring hatching.

The symposium on “Environmentally Cued Hatching Across Taxa” (ICB 2011) showed that cued hatching responses are diverse and widespread across the animal phylogeny. They may be more the norm than the exception. Our research addresses the nature and magnitude of cued hatching responses, their evolutionary history, their developmental, physiological and behavioral mechanisms, and their developmental and ecological consequences.

Most of our research focuses on amphibians, where cued hatching is relatively well studied, and we have accumulated a strong foundation. Our central study species is the red-eyed treefrog and we also work with other Neotropical frogs.  However, we are broadly interested in cued hatching studies in other taxa and happy to help facilitate such research where possible.

Escape-hatching responses of embryos to threats depend critically both on cue reception and hatching ability, which in turn depend on the development of sensory systems and hatching mechanisms. In addition, as traits affecting the ability to survive within and outside the egg capsule change, so do the costs of accelerating or delaying hatching, and of potential decision errors. In red-eyed treefrogs, older embryos hatch more readily but even 30%-premature embryos sometimes hatch within seconds of a cue. Our research addresses how changes in perceptual abilities, behavioral competencies, and optimal decisions combine to shape the development and expression of escape hatching behavior.

The Development of Adaptive Embryo Behavior project is funded by NSF for 2014–2020.

Hatching mechanisms and their regulation

Amphibian hatching was described as a developmental process involving gradual release of proteolytic enzymes as they are synthesized by hatching gland cells, but hatching mechanisms are clearly more diverse. For instance, red-eyed treefrogs hatch in seconds in predator attacks across a broad developmental period. Our research addresses how embryos hatch, how they regulate hatching timing in response to cues, and how this varies over development and among species. This includes in-depth mechanistic research on red-eyed treefrogs and comparative work with other species. 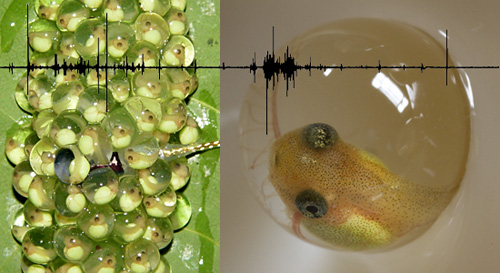 Red-eyed treefrog embryos use  physical disturbance by predators to cue escape-hatching, but rarely hatch in benign disturbances such as torrential rainstorms. We use  accelerometers to measure vibrations in different disturbance types and playback experiments to examine embryos’ escape-hatching responses. Embryos use many properties of vibrations to modulate hatching and their mechanosensory-cued hatching behavior changes developmentally, for multiple reasons. Mechanosensory-cued hatching is widespread in vertebrates and invertebrates, mediating responses to predators, siblings, parents, and abiotic factors. Moreover, many prey use incidental cues from predators to cue defensive behavior at later life stages. In both cases, animals must distinguish predator cues from benign background stimuli, but we understand relatively little about how they do this. Vibration-cued escape hatching offers tractable systems to study the sensory and cognitive ecology of embryos and more general questions about how animals use incidental cues. We have developed new vibration and multimodal (motion + tactile) playback methods for embryos to facilitate this research.

Glassfrogs represent an independent origin of terrestrial eggs and have either brief or prolonged parental care. Embryos hatch prematurely to escape dehydration and predator attacks. Parental care can protect embryos from both risks but caring behavior varies widely across species, contexts, and individual parents. How interactions between males, females, and embryos play out on behavioral and evolutionary time scales was the focus of Jesse Delia’s PhD research, changing our understanding of glassfrog reproductive ecology. Current lab members are examining physiological plasticity of embryos (Javier Méndez Narváez) and hatching mechanisms (María José Salazar Nicholls).