Karen’s plenary talk for the 2022 Congreso Colombiano de Herpetología, in Cali. The recording is from a seminar at the Smithsonian Tropical Research Institute, just before the meeting in Colombia. [High tech, low tech, invention and off-label use: developing methods to study the behavior of frog embryos] 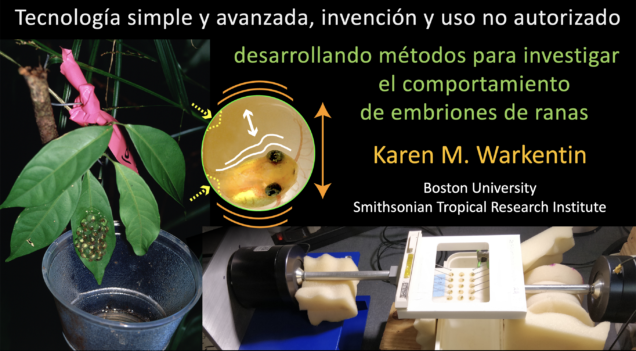 All the variations matter: Bridging disciplines and communities to study diversity in life history and sexual behavior

Queering herpetology: On human perspectives & the study of diverse animals

Karen’s 2019 plenary talk at the IX Brazilian Congress of Herpetology, in Campinas, Brazil

Diversity and plasticity of life: a biologist’s journey from embryo self-defense to sexual behavior

For the Cohen, Seid & Warkentin paper in the June 15, 2016 issue of Journal of Experimental Biology

From The Brink, BU’s research website, with video footage taken at the lab and Experimental Pond of the Smithsonian Tropical Research Institute in Gamboa, Panama.

5 minutes of adult frog behavior, at night after a rain, at the Experimental Pond, Gamboa, Panama – our study site

Male red-eyed treefrogs calling, shaking the plant to communicate vibrationally, and fighting, on a small potted plant by the side of the pond. STRI built this pond in 2004 and we have managed it for frogs ever since. It’s a great pond, and a very convenient place to observe frog behavior. The video is recorded using infrared light, and a Sony nightshot camera.

Hypoxia-induced hatching of red-eyed treefrog embryo. This embryo is 5 days old – mid-way through the plastic hatching period, well before it would typically hatch if undisturbed, but more developed than at the onset of hatching competence. Before reaching hatching-competence, the egg was placed in a small glass cup, and shortly before this clip starts the egg-in-cup was flooded with hypoxic water. It’s like the egg fell into a pond, but cleaner and easier to record on video.Snake-induced hatching of red-eyed treefrogs. The snake is a parrot snake, Leptophis ahaetulla, a common predator of these eggs. The embryos are 5 days old. In Gamboa, Panama, where this was recorded, the earliest predator-induced hatching occurs at 4 days and undisturbed eggs typically hatch at 6 or 7 days. Escape rates at 5 d average ~80%. The device in the clutch is an accelerometer, to record vibrations from the snake moving the eggs. Mechanical playback of vibrations recorded in snake attacks also induces embryos to hatch. The video is in real time and was recorded using infrared illumination.Wasp-induced hatching of red-eyed treefrogs. The wasp is Polybia rejecta, a common predator of terrestrial frog eggs. The embryos are 5 days old, in the middle of their period of hatching competence, when escape rates average ~80%. The first attack on this clutch was 5 minutes ago. Five eggs have already hatched and 2 embryos have been captured when this starts. It is in real time.Flooding-induced hatching of red-eyed treefrogs. The eggs are 5 days old. The video is 22 minutes in real time, sped up to 40 seconds. These embryos need air to get enough oxygen; they will drown if submerged before they can hatch. When eggs are in air, embryos normally keep their heads and gills near the air-exposed egg surface, where there is more oxygen, and they quickly return to this position if by chance they end up facing the leaf at the back. After flooding, embryos change position many times within their egg capsule – probably seeking oxygen or sampling the environment inside the egg – before they change their behavior and rapidly hatch. After hatching, they go to the water surface and fill their lungs with air.The hatching process of red-eyed treefrogs. This embryo is 5 days old. The video was recorded at high speed and is slowed down here. Note the initial small twitches and mouth gaping; these are common pre-hatching behaviors. Then the membrane ruptures and perivitelline fluid begins to leak out. The embryo moves its snout into the rupture site and pushes out, stretching the hole in the egg membrane and squeezing through it.