Kendall Bryant, PhD, Director of HIV/AIDS Research at NIAAA and Scientific Collaborator of the Consortiums for HIV/AIDS and Alcohol Research Translation (CHAART) 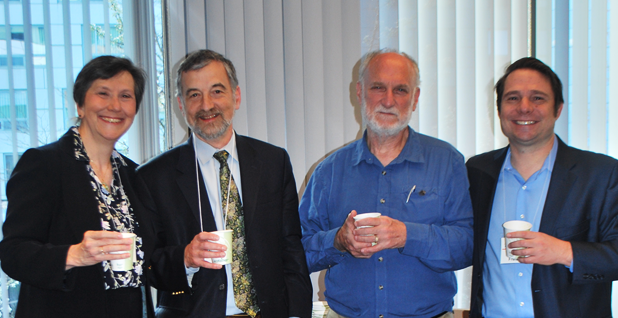 How did the HIV/alcohol research program at NIAAA develop? Were you there at the beginning?

The program developed when I came to NIH, over 20 years ago, and we (ADAMHA) were just breaking into three separate institutes: NIAAA, NIDA, and NIMH under NIH. It was around the time when HIV wasn’t even identified yet as a virus, but it seemed to be associated with substance use among gay men. Some of the initial NIAAA program announcements were around behavioral (e.g., sexual risk behaviors) and immunological (e.g., alcohol and its effect on immune function / susceptibility of contracting HIV). These areas have evolved substantially with current research understandings after two plus decades.

As the HIV epidemic evolved, we examined drinking’s role in HIV transmission among gay men. We found that in regards to sexual risk behavior, drinking was related to the characteristics of sexual risk taking including the number of partners and social networks within these populations. There was also an evolution in regards to effectiveness and toxicity of antiretrovirals, as drinkers were typically more likely to be non-adherent to their HIV medications. We also wanted to understand comorbidities and co-infections (particularly HCV) and their effect on HIV progression. Overall, NIAAA focused on developing a comprehensive behavioral and biological picture of what was happening in the area of HIV and alcohol as well as how to create the best prevention and intervention programs for individuals with HIV infection and substance use disorders.

Recently, in terms of HIV/AIDS and alcohol research, NIAAA has been focusing more on medical decision making and understanding complex patient cases—particularly as it relates to addressing the high priority goals set forth in the NIH OAR Plan for AIDS Research and the National HIV/AIDS Strategy’s goals related to the Care Continuum. Many individuals with HIV infection are experiencing complicated health problems such as alcohol and substance use disorders which can result in organ and tissue injury in the gut, liver, and brain. The outcome of these health problems may result in increased frailty and chronic health issues. Our goal is to optimize care and treat many of these other issues in a coherent way within the context of available heath care resources.

Several years ago what was the motivation for NIAAA to create the CHAART consortium?

The idea was that you needed cohorts with well-measured alcohol use, recognizing that you are now treating HIV patients with many comorbidities. The first place we looked was the VA, which had high drinking and HIV rates. We looked at how we could incorporate periodic assessments into the cohort to create a new methodology for understanding epidemiological issues in this population. We also wanted to improve alcohol measurement and its consequences in existing clinical cohorts like the CNICS or Kaiser Permanente, even community cohorts in high risk geographic areas in the South. Part of the overall goal is to improve the measurement and analysis of alcohol use patterns in the context of HIV in both domestic and international settings. We also created a cohort here at BU/BMC that looked at individuals with both HIV infection and a range of substance use characteristics. Ultimately, for CHAART, we wanted these cohorts not only to be well-characterized but also to have an intervention component so that we could track their effectiveness within these populations over an extended period of time through different information systems such as electronic medical records.

What, in your opinion, does URBAN ARCH bring to the CHAART consortium? What do you enjoy most about being the scientific collaborator?

URBAN ARCH is unique in that it has international and comparative samples in the area of HIV and alcohol use. In international populations, we see more “pure drinkers” in that they do not have as many comorbidities associated with other substances. So it has provided us with an opportunity to study these issues in different cultures and in low-resource settings, where we can better understand contextually what is happening and work to develop and implement effective interventions. In addition, certain comorbidities, such as TB and MDRTB, can be found in these populations and studied effectively.

As the scientific collaborator, I’m interested in the pragmatics of clinical research, methodological research, and ecological frameworks with regards to HIV and healthcare. It’s really more of an adaptive framework of healthcare that focuses primarily on long-term health prevention instead of acute treatment. I also enjoy the emphasis on team science and trying to break down research silos, which is more of a person-centered humanistic approach rather than a disease pathogen focus. It seeks to integrate multiple levels of research from the outset. I think these goals are consistent with the evolving “team science” approach at NIH and increased interest in translational research with significant public heath benefits.

What is your vision for CHAART in the next decade? What barriers or challenges are there to achieving this vision?

My vision for CHAART involves more collaborative networks and overarching activities. This could include, for example, looking at alcohol and nicotine use and how we can get individuals to address this with regards to existing pharmacological medications. Or, how we can examine other issues such as brain/liver interactions, frailty, and HIV/HCV co-infection. I think all of this will involve ways in which we can track patient outcomes, integrate electronic systems, implement interventions, and optimize care and information.

In terms of barriers, I think, as the funding gets tighter, investigators tend to hold onto their money. There are people who “own” certain areas and have developed really good things from it. But it makes it hard for young investigators to come into the field. Another significant barrier is that HIV is now competing with other important research areas such as Autism and Alzheimer’s, so HIV may not be on the public’s mind as a concern anymore as HIV shifts to a more chronic disease management focus.

Tell the readers one fact about yourself that would surprise them.

I worked with the submarine service where I developed psychological screening instruments for the Department of Defense. I’ve actually been deployed on submarines for the selection and screening of their crews. I enjoyed the “angles and dangles” when testing new/rebuilt subs! Also gives a whole new meaning to “subtype” if you are a psychologist.