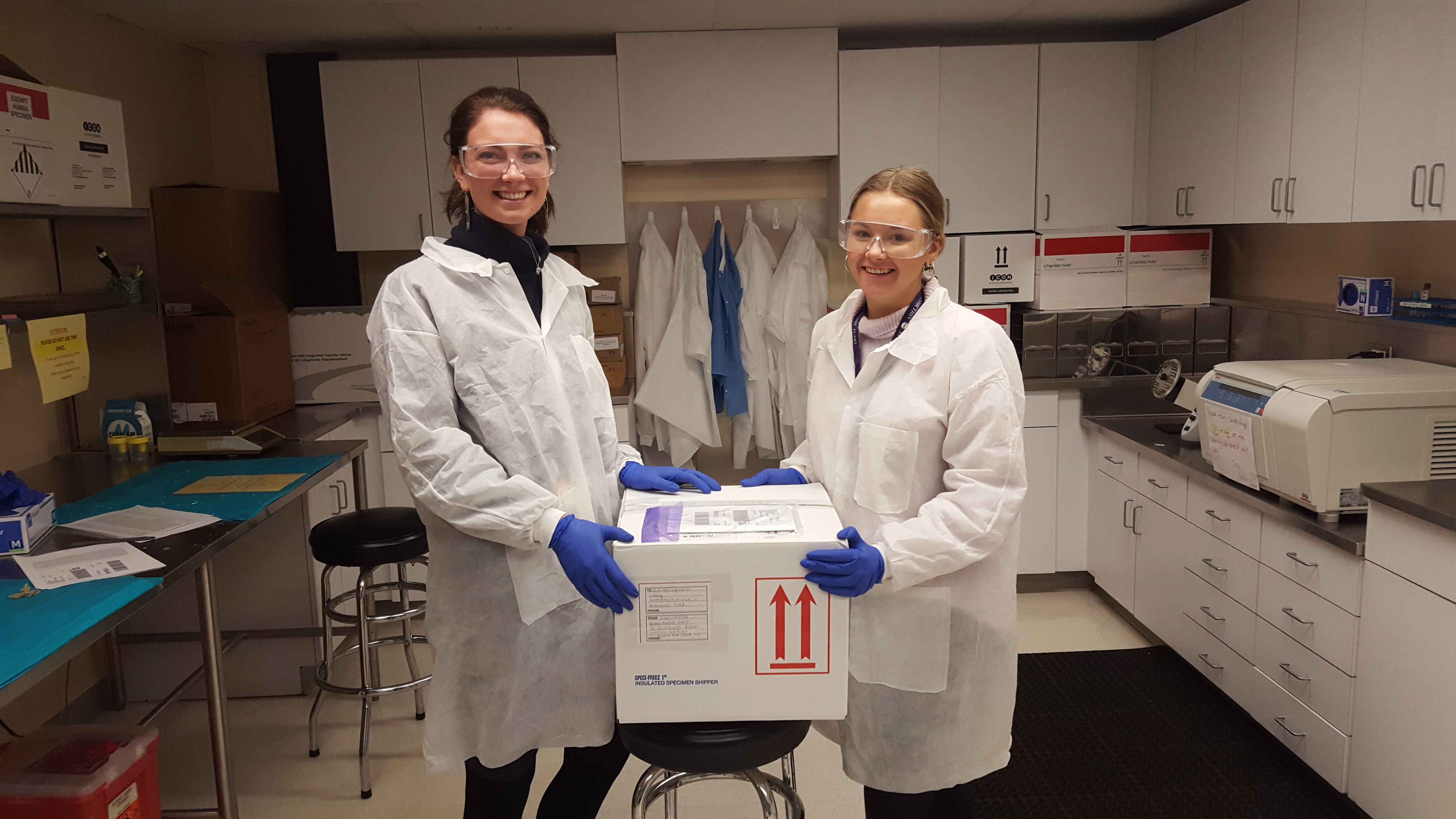 Anna and Sarah in the Repository

The URBAN ARCH Admin Core team welcomed two new team members this fall: Sarah Koberna, MA and Anna Martin. Sarah recently completed her Master’s Degree at Boston University in Psychological and Brain Sciences. Anna completed her Bachelors of Science in Chemistry from William and Mary earlier this year and worked as an Administrative Assistant at Beth Israel Deaconess Medical Center. Sarah and Anna are thrilled to be a part of the URBAN ARCH team.

This fall has been busy for the Admin Core team! In the sample repository, we shipped nasal, fecal, and dried blood spot (DBS) sample shipments to Nashville, TN, Louisville, KY, and Muttenz, Switzerland. A large sample shipment was received from St. Petersburg in mid-August, which consisted of serum, plasma, whole blood, DBS cards, and nasal samples. Additionally, the Admin Core prepared for and held the second DSMB Meeting of the year in late October. Thank you to all who helped to make this a successful meeting!

Lastly, the Admin Core is already preparing for the 2020 Annual Meeting! This year it will take place on March 12th, 2020 in Boston, MA. You can register for the meeting here. Be on the lookout for emails concerning the Annual Meeting coming soon! 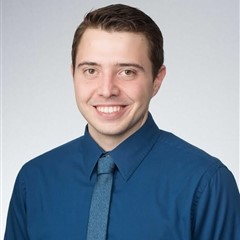 Over the past few months the BDM Core has been active in data management and biostatistics activities across URBAN ARCH. The core was instrumental in preparing for the fall DSMB meeting and collaborated on several recent URBAN ARCH abstract submissions. We are delighted to welcome a new member to the BDM Core, Ahmad Yassine. Ahmad grew up in Kansas and then moved to Boston to pursue his MPH with Boston University. He previously worked for the Massachusetts Department of Environmental Health, where he helped develop life expectancy measures via spatial and statistical analysis. Ahmad will be working on the BDM Core teams for both the Boston and Russia cohorts of URBAN ARCH.

We are counting down in single digits with just 6 participants left to conclude enrollment of 302 participants in the ADEPTT study. As of December 6, 2019, we have enrolled 296 participants into the study, including 144 males and 152 females. Of these, 194 are current alcohol drinkers and 102 are alcohol abstainers, thus completing our non-drinker stratum. We have screened 1,418 patients from the Mbarara ISS Clinic, of whom 1,157 were eligible for further screening for latent TB. Out of 1,170 PPD placements completed, 302 (26%) participants had positive results for latent TB and were eligible for the study. We’ve completed baseline procedures for all 296 participants enrolled, 291 two-week follow up study visits, 284 month-1 visits, 263 month-2 visits, 266 month-3 visits, 222 month-4 visits, 197 month-5 visits, 200 month-6 visits, 156 month-7 visits, 142 month-12 visits, 94 month-18 visits, and 53 month-24 visits. Twenty-three participants have discontinued TB preventive therapy (INH) due to grade 3/4 level toxicities and two women have discontinued INH due to being pregnant. One participant is deceased and the cause of death was unrelated to the study.

It’s conference season in East Africa! PI, Judy Hahn, was in Mbarara, Uganda with the project director, Nneka Emenyonu, attending the Mbarara University of Science and Technology (MUST) Annual Research Dissemination Conference for 2019. She also oversaw study activities, met with co-investigators and project staff and took a tour of local bars while brainstorming grant renewal ideas. 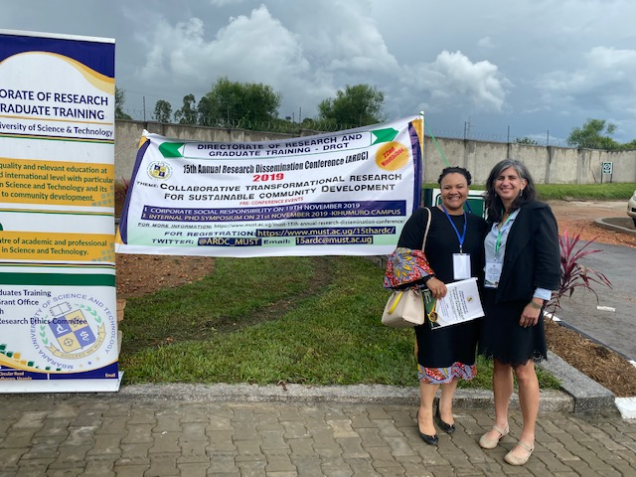 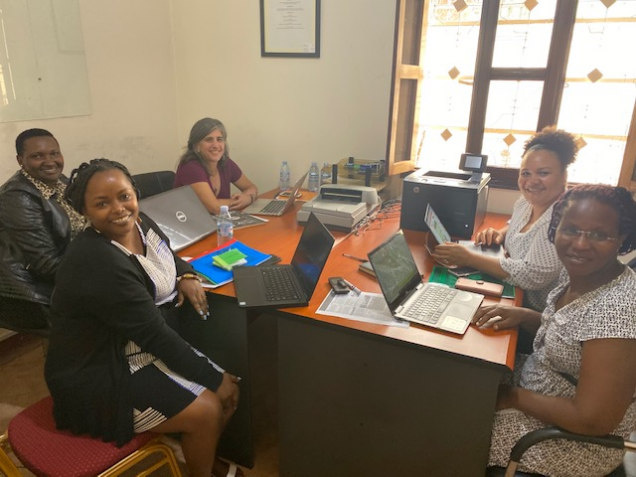 We were well represented at the International Conference for STIs and AIDS in Africa (ICASA), 2019 in Kigali, Rwanda. The Ugandan project coordinators presented data from ADEPTT, DIPT, and EXTEND studies individually.

DIPT poster: “Post-traumatic stress disorder among HIV-positive heavy alcohol drinkers in southwestern Uganda.” We found that of the 232 participants evaluated, 60% reported ever experiencing a traumatic event, 22% reported at least 3 symptoms of PTSD with the most commonly reported symptoms being nightmares and avoiding thinking about the event (32% each), followed by being constantly on guard (25%), feeling guilty (13%), and feeling detached (12%).

EXTEND poster: “Adapting an evidenced-based brief alcohol intervention to reduce alcohol use among HIV-positive men and women in southwestern Uganda.” An iterative process of adapting an externally developed intervention, using qualitative methods, resulted in modifications to enhance relevance and appropriateness for the local context, which can be adapted for other settings. 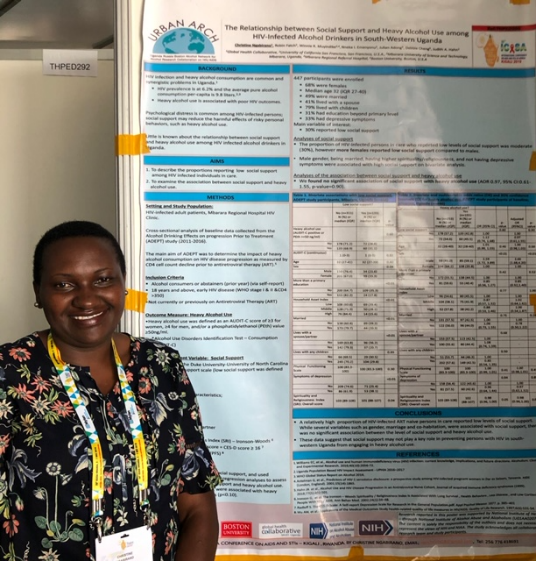 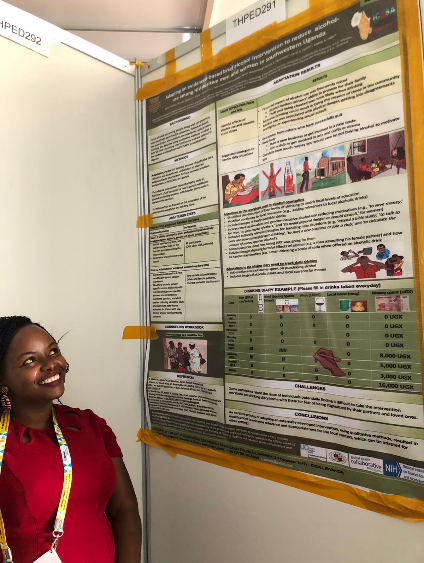 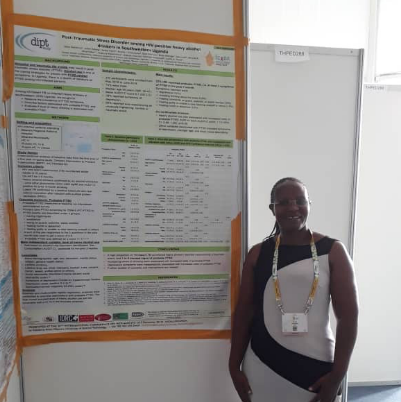 As of December 2nd, St PETER has enrolled 380 participants. The three-month completion rate for St PETER is 77%. We expect to complete enrollment for St PETER by the end of 2019. As we enter year 4 of the grant period, the team is actively discussing possible renewal ideas and secondary analyses.

We are in the midst of study start-up for the UH3 component of the PETER PAIN study, which will compare low-dose naltrexone and gabapentin vs. placebo to address chronic pain among HIV-positive, heavy drinkers in St. Petersburg, Russia. The three-year study will enroll 45 participants and is led by Judith Tsui and Jeffrey Samet.

The URBAN ARCH-affiliated SCRIPT study (“Stigma, risk behaviors and health care among HIV-infected Russian people who inject drugs”), led by Karsten Lunze, began enrollment on October 10th, 2019. This randomized controlled trial will enroll 100 HIV-positive individuals who inject drugs from non-government organizations (NGOs) in St. Petersburg, Russia. The intervention group will receive a culturally-adapted version of Acceptance and Commitment Therapy to target internalized substance use stigma and HIV stigma, and the control group will receive standard of care from the NGOs. Findings from this study will inform subsequent stigma interventions, with the goal of helping affected people cope with their HIV and substance use status.

The HIV Latency study (URBAN ARCH-affiliated) has collected blood samples from 51 viremic and aviremic HIV-positive participants, both with and without current opioid use. This blood will be analyzed to examine the differences in biomarkers of HIV pathogenesis and latency between the opioid and non-opioid groups. Christine Cheng and Andy Henderson are the PIs for this study.

As the year comes to a close, the Russia ARCH team wishes Marina Vetrova all the best as she returns to St. Petersburg. Marina was a 2019 NIDA INVEST fellow, examining the role of substance use and HIV stigma on the HIV treatment cascade. Thank you, Marina, for a great year here at BMC! 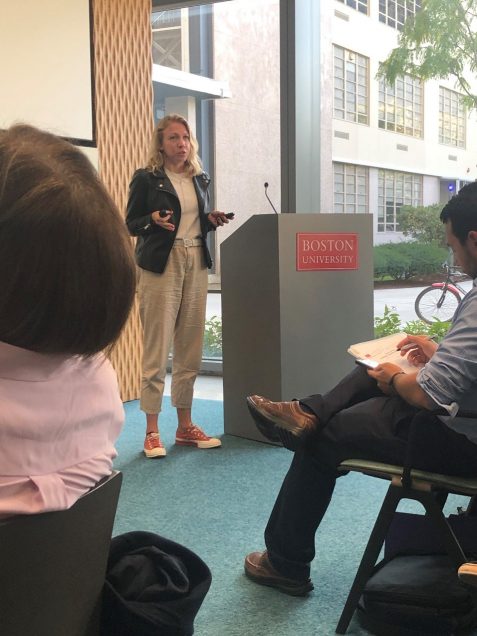 Marina Vetrova presenting on stigma’s impact on health care at Boston University’s “Research on Tap: Working towards an HIV Cure” on September 24th, 2019.

The Boston ARCH Cohort, a study whose main aim is to assess the association between alcohol consumption and bone density among people with HIV infection and substance dependence, began recruitment in December 2012.

We are also in the process of scheduling our first qualitative interview, which will provide further information and guidance in the development of a falls intervention.

Finally, we recently had a paper published: