Essay: Newton and Goethe: A Dialogue on Color 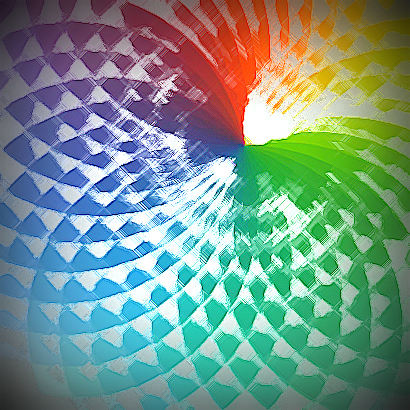 People think I unlocked the prism, but the prism is a key, not a lock. Once I had it in my hands the secrets slipped out one after another like sheep from a pen. Even so, I stayed in that attic for weeks and months more while the plague ran loose in London. Shutting out the light, I came to know the swelter and stink of the world as a blind man knows it. I was Descartes in his bread oven; darkness the scourge that strengthened my mind against the deceiving demon.

I made the seven colours fly around my chamber – pulling them apart and putting them back together. The levers of the mechanism are bits of glass – prisms, mirrors, and lenses. The gears of the machinery lie beneath vision. Even these true colours are a mere slick of oil on top of the deep waters of reality.

A plague of questions distracted me. They asked, “Where is the organizing principal?” while vermin ate my bread. Time wound faster as they mocked, “With what tongues can this machine be described?” and I forgot again to rest. At last the servants found me unconscious and carried me down into the blinding light.

They say octave to mean eight. But sing “Do, re, mi…” and there are only seven notes. It is merely ‘Do’ at both ends and so the straight line becomes a circle. It woke me the night before the fever broke. Rising above the river, the wheel burned; red, orange, yellow, green, blue, indigo, violet… and red again. I did not invent the colour wheel. It discovered me.

To a certain degree, Newton and Goethe were talking past each other. Because each man defined the problem of color differently, each sought out different tools and achieved different results. Most commentary on their differing

views on the nature of color reports Goethe is wrong due to incorrect physics. This, of course, is correct, but only if you are willing to grant that the

nature of color can be accounted for in terms of physics and by means of objective observation.

Newton’s reputation for achieving a divine simplicity— as he composed the laws of physics by which both planets in the heavens and apples here on Earth are governed, when he discovered or invented the calculus, and when he divined the nature of light — is well earned. In the case of The Opticks, he created a tour de force not just on his subject but also on the scientific method. And though we now can identify many scientific flaws, and many unscientific leaps of faith, the central insight of his work was right and it was revolutionary.

White light (light that renders a white page white) is made up of many different colors of light. Today we consider this axiomatic. But in its day, it was as counter-intuitive, as anti-axiomatic as a conclusion could be. White and light to the medieval mind were not complex things; they were simple, pure things. The moral sense of their purity, of their simplicity, went hand in hand with their metaphorical connection with truth, with understanding, and with God. Getting the world to accept otherwise, perhaps even bringing himself to it was one of Newton’s great challenges.

His invention of seven primary colors (ROYGBIV) and of the color wheel allowed Newton to make use of another abiding matter of faith held by scholars throughout the Christian world. This was a conviction that had been cherished ever since Pythagoras plucked a string and then cut it in half and plucked it again to demonstrate the mathematical nature of sound. Everyone knew that the wonders of light in God’s creation, once they were revealed, would operate as sound was shown to operate.

The color wheel is a musical wheel. 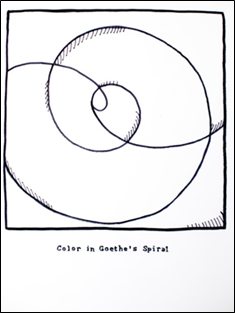 The color pyramid was revealed to me in a time of doubt. As the last century was dying my plans for a new color theory seemed to add up to less than their parts. I had always considered myself an artist, but I feared Sir Isaac had bested me with his seminal creative act, the invention of the color wheel.

Hoping to induce that abstraction of mind that precedes inspiration, I walked the streets of Weimar at dusk, when only young people and cutpurses are afoot, their shadows long and furtive in the sanguinary light. Carriages dashed past me in the gloom, their great iron shod wheels spinning so fast their spokes disappeared.

At my desk I recalled those wheels and drew upon my parchment a spiral inscribed inside a circle. In that moment I felt a shiver, my soul’s recognition of the active nature of color — always changing and self-renewing. I placed a teardrop of purple-red hue in the center of the spiral and fell asleep in all my street attire. I was awakened by cool breezes from the southern mountains. In that morning’s buttery light my spiral seemed to me… almost good.

Waking again two weeks later in the arms of those mountains, with the sun below the horizon, was my rebirth into color. The dawn probed the blackness drawing forth a blue infinity. Gold licked the tops of the western range and in a moment the full color of the valley sprang forth. By late morning we had walked to a point where we could look down upon a waterfall. We drained a bottle of Riesling to honor the rainbow that danced beneath us: a complete circle of color, not a mere arch.

But it was the sunset that gave me my pyramid. As the orb dropped, its hue intensified from white, to yellow, to orange. Skiing across a frozen plane, with a triangular peak on my left and the sun on my right, I watched the snow become the shameless pink of a tulip’s petal. I gazed at my shadow – an arrow stretched across a league of pink snow, pointing to the mountaintop. That line was not black as painters might depict but a brilliant glowing peacock green. Then night’s horizon swept that field away and slid up the mountain’s face. The last image the sun gave me was the triangular peak soaked in blood.

It was Newton’s assertion “I am not speaking of a color of the eye or mind,” that should have given Goethe all the ammunition he needed. To this he might have responded “Then you are not speaking of color at all.” To some degree he did do that. But just as Newton was rather more inventive and inspired by his own cultural conditioning and faith in the divine order than his scientific treatises might suggest; Goethe was duly influenced by his own conviction that if Newton were wrong philosophically, then his science would prove flawed as well. Thus did Goethe provide us with numerous perfectly good but beside-the-point demonstrations of color phenomena in his effort to prove that Aristotle’s 2,000 year old color theory was correct.

But Goethe was a philosopher who understood the drift of thought in 19th century Europe. He was a romantic who had grasped an important flaw of empiricism: the impossibility of objectivity. His stance was this: The sun was not made for the eye— it was not made by the eye or of the eye. The eye was made for the sun; it is of the sun. This stuff is so romantic, I frequently urge my students to use it in their love letters. But it also stands true. The light that bathes creation was the precondition that caused our eyes to be as they are. When we see color it is not out there in the world– painted onto tulips and snow banks– it is formed in our eye and mind. Our perceptual apparatus creates color within us— tweaked and filtered by our emotional state and cultural biases. And while knowing the physics of color is useful for manufacturing paint chips for the paint store, it is the other side of perception where most of the meaning lies for us.

Color is only of the eye and mind.