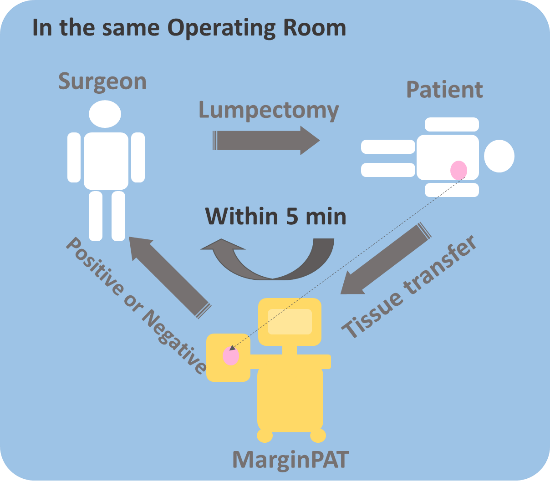 After a breast conserving therapy, histology is often performed to check whether the excised tumor specimen is surrounded by a sufficient amount of normal tissue. If a positive margin is identified, then a second operation will be performed. Currently, the re-operation rate is 20-40%, which raises a need for intraoperative detection of residual cancers. We developed a multi-modal spectroscopic photoacoustic/ultrasound imaging system to differentiate cancer and normal tissue in a resected breast tissue [Medical Device and Sensors 2018]. Providing both chemical content and mechanical property information, this system, named MarginPAT, is able to measure map tissue components including blood, fat, fibrosis tissue, and breast lesion. Based on a compact Raman laser and a high-speed scanning chamber, the proposed MarginPAT system is able to scan 10 cm2 tissue area per min, which is faster than the frozen section analysis (gold standard for intraoperative assessment) by one order of magnitude. Such capacities allow 3-dimensional assessment of margin status in the entire excised tissue with >90% sensitivity and specificity. This project is funded by NCI/STTR grant to Vibronix Inc. Our margin PAT device received SPIE Photonics West Translational Research Award in 2015. 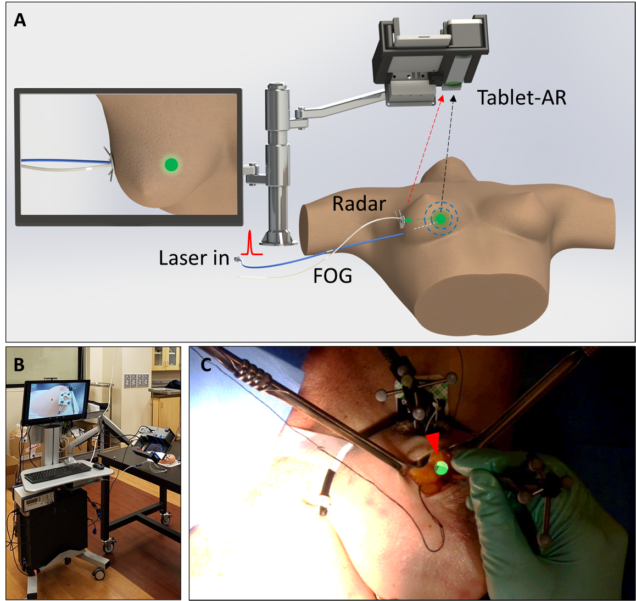 Lumpectomy, also called breast conserving surgery, has become the standard surgical treatment for early stage breast cancer. However, accurately locating the tumor during lumpectomy, especially when the lesion is small and non-palpable, is a challenge. Such difficulty can lead to either incomplete tumor removal or prolonged surgical time, resulting in high re-operation rates (~25%) and increased surgical cost. Here, we report a fiber optoacoustic guide (FOG) with augmented reality for tumor localization at sub-millimeter accuracy. The FOG is pre-operatively implanted in the tumor and emits omnidirectional acoustic wave through a nano-composite layer coated on the tip. Three ultrasound sensors are used to triangulate the FOG tip’s position, and a stereo camera measures the coordinates of the three sensors. Via coordinate transfer at 25 Hz refresh rate, the FOG tip’s position is projected on an augmented reality system with a tablet. It aids surgeons to directly visualize the tumor location and perform fast and accurate tumor removal. We further show the use of head-mounted display to visualize the same information in surgeons’ first-person view and achieve hands-free guidance. Towards clinical application, a surgeon successfully deployed the FOG to excise out a “pseudo tumor” in a female human cadaver. This project is funded by a SBIR grant through NSF. [Light Science & Applications 2018]

Stimulated Raman scattering (SRS) microscopy generates chemical maps of live cells or tissues. A handheld imaging system using an optical fiber for laser delivery further enables in situ and in vivo measurements. However, the non-resonant background caused by the interaction between two ultrafast pulses inside an optical fiber overwhelms the stimulated Raman signal from the sample. Here, we report a background-free handheld SRS microscope. By temporally separating the two ultrafast pulses propagating in the fiber and then overlapping them on a sample through a dispersive material, we detected stimulated Raman signal that is 200 times weaker than the non-resonant background. The handheld microscope allowed ambient-light mapping of pesticide on a spinach leaf, cancerous tissue versus healthy brain tissue in a canine model, and cosmetic distribution on live human skin. [ACS Photonics 2018]