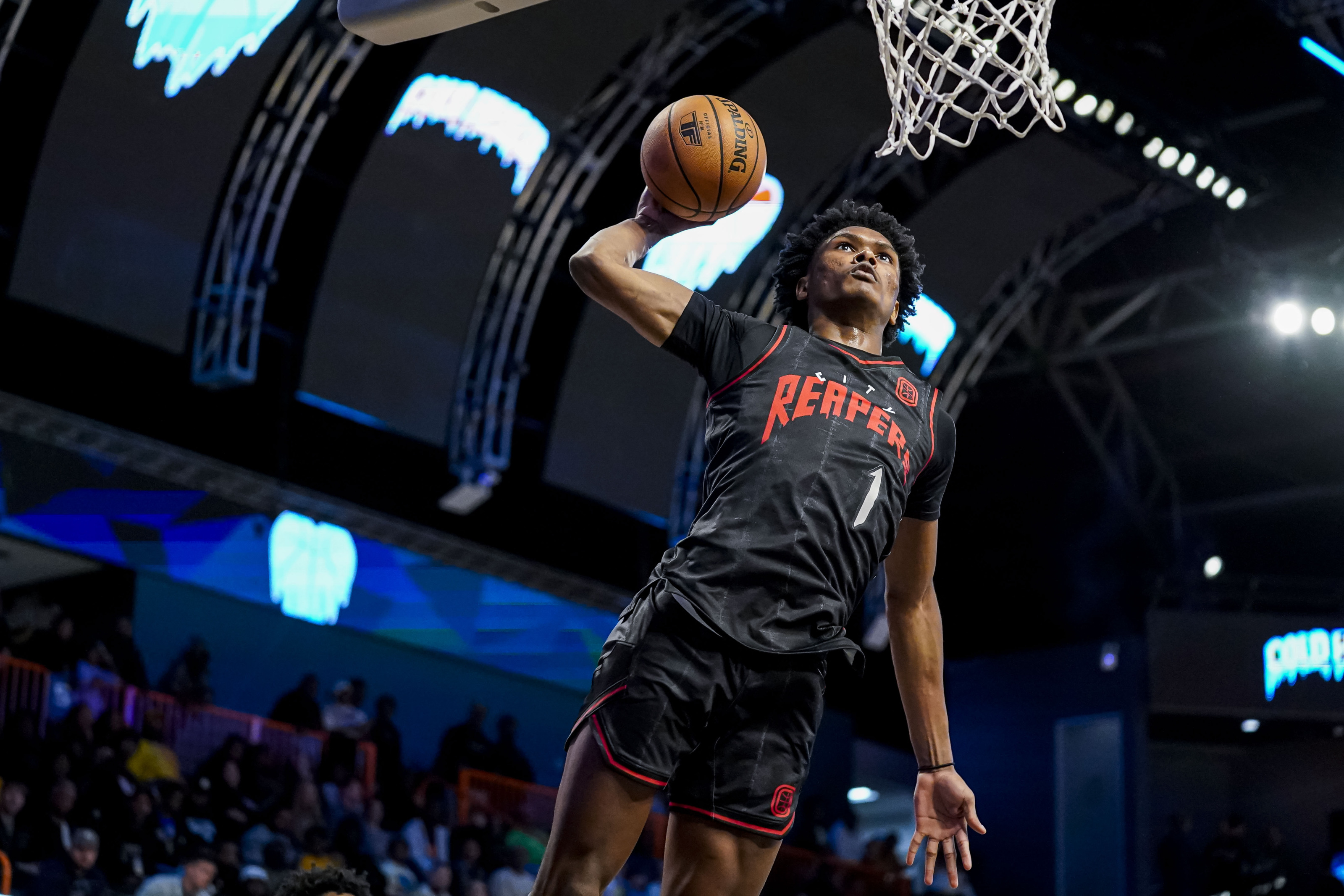 New year, new games and new talking points about the 2023 NBA Draft. So much has happened since the last installment of this article. Conference play has begun in the NCAA, trades have happened in the NBA and several new prospects have shot up from second-rounders at best to guys in contention for a lottery spot.

Teams and fans alike are starting to craft their big boards with legitimate confidence in their assessments of each player. And because of this newfound confidence, I feel now is the perfect time to write my next mock draft, the first of 2023.

In an attempt to dispel any assumption of the opposite, this order is not a big board, nor is necessarily it a ranking of basketball’s best prospects. In addition, these are also not predictions. This is a mock draft based on what I believe each team should do given the position they are in and the players available to them.

I take a variety of factors into account here, including overall talent, physical tools, team needs and skillset matches. In some cases, I may pass on a player who I believe to be a better prospect to take a player who fits better with the team drafting at a certain position. But this is simply my opinion based on the amount of basketball I’ve consumed over these last months, and it may be very different from yours. And that’s the beauty of this type of speculation.

So without further ado, here is my second 2023 NBA Mock Draft:

*Draft order is based on NBA standings as of Jan. 23, 2023, as well as any transactions that have taken place before then.

Barring an impeccable winning streak or a dramatic fall-off, each team will likely pick around the spots they’re currently at. We’re at the point in the NBA season where we know how serious each team is competing for a championship, and which ones will be stuck in the basement.

Therefore, fans of each team should familiarize themselves with the names of the players in close proximity to where their team is selecting in this mock draft, because in all likelihood, they’ll end up with one of them in June. But even though not everyone will become the next NBA superstar, I believe every team’s potential can be maximized if they select the respective prospects that I have. Each of these selections, in my opinion, is the right one for each team given a combination of talent, team fit and player availability. I’ll go through some of the player/team combinations I find the most interesting.

Remember when I said that I will sometimes pass over a better player if I think a different, lesser-ranked player’s fit is better with the team at that selection? Such was the case with my No. 3 overall pick. I know that this column has become the Brandon Miller fan club as of recently, but I still have Overtime Elite guard Amen Thompson ranked somewhat comfortably ahead of him.

But Thompson’s strengths do not align with Charlotte’s areas of need as well as Miller’s do. The Hornets need shooting, perimeter defense and off-ball talent to complement their rising star in LaMelo Ball. Thompson has the defensive skill and the finishing talent they’ve been missing since Miles Bridges’ (deserved) exodus, but he’s best utilized as a ball handler in my eyes, which will take the ball away from Ball, and his shooting needs a ton of work. Miller pairs next to Ball almost perfectly, and I think Miller would become Ball’s favorite passing target. The two complete each other, which is why I have Miller going third to the Hornets over Thompson.

But Thompson won’t wait that long to hear his name called, as I have him going fourth to the San Antonio Spurs. And honestly, this might be one of my favorite player-team fits in this draft.

I like Tre Jones. He’s a very solid defensive-minded guards, and I believe he can admirably run a second unit. But his offense is far from where it needs to be to be a consistent starter in the league. Replacing him in the main lineup with Thompson would work wonders for the Spurs. I’m all aboard the train that says Thompson is secretly the best playmaker in this draft, and having several spot-up and cutting threats like Devin Vassell, Keldon Johnson and potentially Malaki Branham to pass the ball to would only affirm that.

He’s also one of the most athletic human beings I’ve ever seen, being able to effortlessly shift gears and leap with the strength and grace of a gazelle. The Spurs could use that athleticism on both sides of the ball, as a finisher and defender. Regardless of how they want to play him, Gregg Popovich and the rest of the Spurs organization will be jumping for joy if Thompson is still available by the time they draft him.

I really like the combination of players that Orlando takes in this mock, Villanova’s Cam Whitmore and Michigan’s Jett Howard. Truth be told, I am an Orlando Magic fan. And I know as well as anyone that this team is in desperate need of two things: a perimeter defender that doesn’t need the ball in his hands to thrive offensively, and spacing.

The Magic check both of those boxes with their selections of Whitmore, an athletic, powerful player who plays very admirable defense and is probably the best cutter in this draft; and Howard, one of college basketball’s best shooters, shotmakers, and highlight reels. I’m not sure which of these two players ends up starting for the Magic, or if it ends up being soon-to-be third-year guard Jalen Suggs. Regardless, the Magic need a supporting cast to surround their stars Paolo Banchero and Franz Wagner, and there aren’t many players that can do that better than Whitmore and Howard.

If I’m being perfectly honest, I have no idea what to make of GG Jackson. He’s so young (he was born in November 2004) and already shows NBA-level shot creation, quickness, athleticism and respectable shooting, especially for someone as tall (6’9”) as he is. But I don’t think he even knows how to play off-ball, as he doesn’t seem to know how to get himself into position to cut or shoot well.

To make matters worse, he is a dreadful passer, with an assist-to-turnover ratio of a measly 0.3. So not only is he an on-ball player only, he’s also a ball stopper. That combination makes it very easy for opposing defenses to shut him down. I’d normally steer clear of players like this… but the upside is there.

He’s also so young and raw that proper coaching can change almost all of that, since South Carolina’s scheme all but forcing the ball in his hands for every play doesn’t help him ameliorate his weaknesses. He’s worth a lottery pick on upside alone, and if anyone can help him achieve his full potential, it’s Willie Green and the New Orleans Pelicans.

Jackson can play under Jonas Valanciunas for the first few years of his career, become familiar with the game’s nuances while learning from the likes of Brandon Ingram, Zion Williamson and CJ McCollum, and when a starting center spot opens up for him, he can assume that role and turn into a valuable contributor for a Pelicans team that should still be contending.

I haven’t really considered the possibility of Houston’s Jarace Walker to the Indiana Pacers up until now, but now that I am, I really like it. Walker is one of the best defensive players in this draft, a Swiss army knife on that end that can switch better than most of his peers. That defensive versatility is something that the Pacers absolutely need, especially if Myles Turner leaves this summer. On offense, he looks to be the perfect pick-and-roll partner for Tyrese Haliburton, and just simply playing alongside each other could unlock both of their offensive potential. They fit together just as well as Ball and Miller would in Charlotte, and for that reason, as well as Walker’s NBA-ready defense, frame and his filling a hole for the Pacers at starting power forward, I have him going here.

The forward situation in Atlanta is uncertain at best. Rookie AJ Griffin looks to be a valuable piece, but DeAndre’ Hunter is underwhelming and John Collins’ days as a Hawk might be numbered. That’s why I have Atlanta reaching a little and selecting the biggest riser since my last mock draft: UCF’s Taylor Hendricks.

I discussed him briefly in my last article, but I have grown to love Hendricks’ game. He, like Walker, is a versatile and switchable defender, but he is also a very good spot-up shooter too. If that doesn’t scream “Hawk,” I don’t know what does.

He and Griffin would become an intriguing shooting forward duo in Atlanta, giving Trae Young plenty of off-ball tools to work with. Within time, Atlanta’s closing playoff window might swing back open with young talent of Griffin, Hendricks and center Onyeka Okongwu playing alongside Young. If the Hawks decide to move on from Collins, they should feel comfortable knowing that his replacement will likely be available for them to select, one who fits the team like a glove.

Finally, the Houston Rockets find themselves in a very interesting situation. The NBA’s worst team is in desperate need of a point guard, as I have officially lost confidence in Kevin Porter Jr.’s ability as a facilitator and playmaker. I liked TyTy Washington in last year’s draft, and I think he’ll eventually assume that starting point guard spot after lighting up the G-League, but the Rockets could use some insurance, and I’m not sure if I like any of the available ball handlers in the mid-20’s as much as I do Washington.

So I did something weird, but hopefully effective. In addition to selecting the best NBA Draft prospect in the past 20 years in Victor Wembanyama (there’s no chance they’d take a guard over him), I have them taking Florida State’s Baba Miller here. Miller is, without question, the biggest wild card of this draft. He hasn’t played much this season, coming off of an NCAA-mandated suspension and tonsillitis. That makes it very difficult to speculate how his unique game will translate to basketball. He’s a near 7-footer with genuine guard skills. I’d love to see whether or not Miller could assume ball handling duties on a Rockets team that would do anything to have one, but if he can’t, they have one in the G-League in Washington.

This has been my second mock of the 2023 NBA Draft, and I’m very confident in it as of now. Of course, anything can change from now to June, but things are starting to come into focus now. All of these players have something to give to the teams that I have them going to, and that’s why I have them going in their respective places. But there’s still so much basketball to be played before then, and I will continue to cover it all right here on “With the First Pick.”