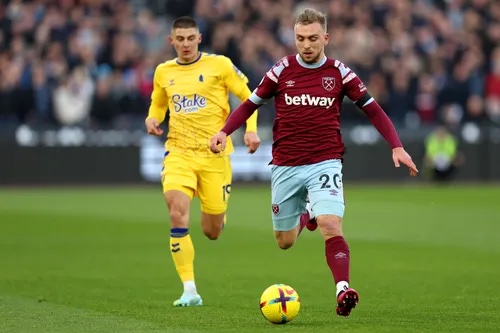 The Premier League has not disappointed since its return from the World Cup in December. Arsenal continue their fight to stay ahead of Manchester City; Liverpool and Chelsea have slipped to embarrassing ninth and 10th positions, respectively; and Fulham and Newcastle maintain their strong runs in the top half of the table.

There is drama at the other end of the league too. Only two points separated 14th-placed Leeds and bottom of the table Southampton. The other two teams in the relegation zone, West Ham and Everton, met in a crucial clash at the London Stadium this weekend that saw Jarrod Bowen’s double lift the Hammers to safety, for now.

Neither side created much for the first half hour, until a cross fell to Bowen right in front of Everton keeper Jordan Pickford. Less than 10 minutes later, Bowen helped launch a counterattack and continued his run, beating a defender to another cross for his second goal.

West Ham found a few more chances in the second half but were more focused on resisting the Toffees’ attacking substitutions. Three precious points took the Hammers out of the relegation zone and into 16th.

After a seventh place league finish last season and winning all six group games in the Europa Conference League this fall, their domestic performance is startlingly poor. David Moyes and the London club had a slow start to this campaign but fought their way up to 10th place at the end of October. Since then, they hadn’t won in seven games and slid into danger of relegation.

Everton are a club in distress. They barely managed to survive the drop last year, narrowly beating Crystal Palace in Matchweek 37 to secure their escape. This season has not been much better. Aside from issues on the field, fans are increasingly unhappy with the club’s leadership.

Goodison Park saw a protest against the administration after their loss to Southampton last week. However, the directors were not even in attendance due to safety concerns. Their troubles compounding, the club sacked manager Frank Lampard on Monday morning. With an atmosphere of such turmoil, it is no wonder that the side is having a difficult time putting results together.

The most significant effect of West Ham’s departure from the bottom three is the increasing peril of Everton’s position. A change in leadership, as the fans are loudly calling for, takes an incredible toll on any club. Everton simply do not have that room to spare.

To make matters worse, teams around Everton are finding the much-needed points to crawl towards safety. Nottingham Forest, who sat bottom until a string of three wins in five games, are a perfect example of a team turning around their fortunes and are now sitting comfortably in 13th. While certainly a difficult task, Forest has shown that it is possible.

Nottingham Forest, Southampton, Wolves and now West Ham have all found ways to earn points and inch themselves closer to another year in the top flight, but Everton are not enjoying such luck. This loss means it has been over three months without a win, and they’ve earned only a measly two points in that time.

An even gloomier prospect, they must search for a new manager while staring down two challenging games against Arsenal and Liverpool. With so little confidence on the field, so much internal chaos off of it, and so few opportunities remaining to string results together, the club is in real trouble.

The Toffees are one of only six teams who have never been relegated from the current edition of the Premier League. If this season breaks that streak, and it sadly looks likely, it would be their first time outside the top flight since 1954-55. While there is still time to salvage another last-minute escape, defeats like this to West Ham drive Everton closer and closer to the dreaded drop.