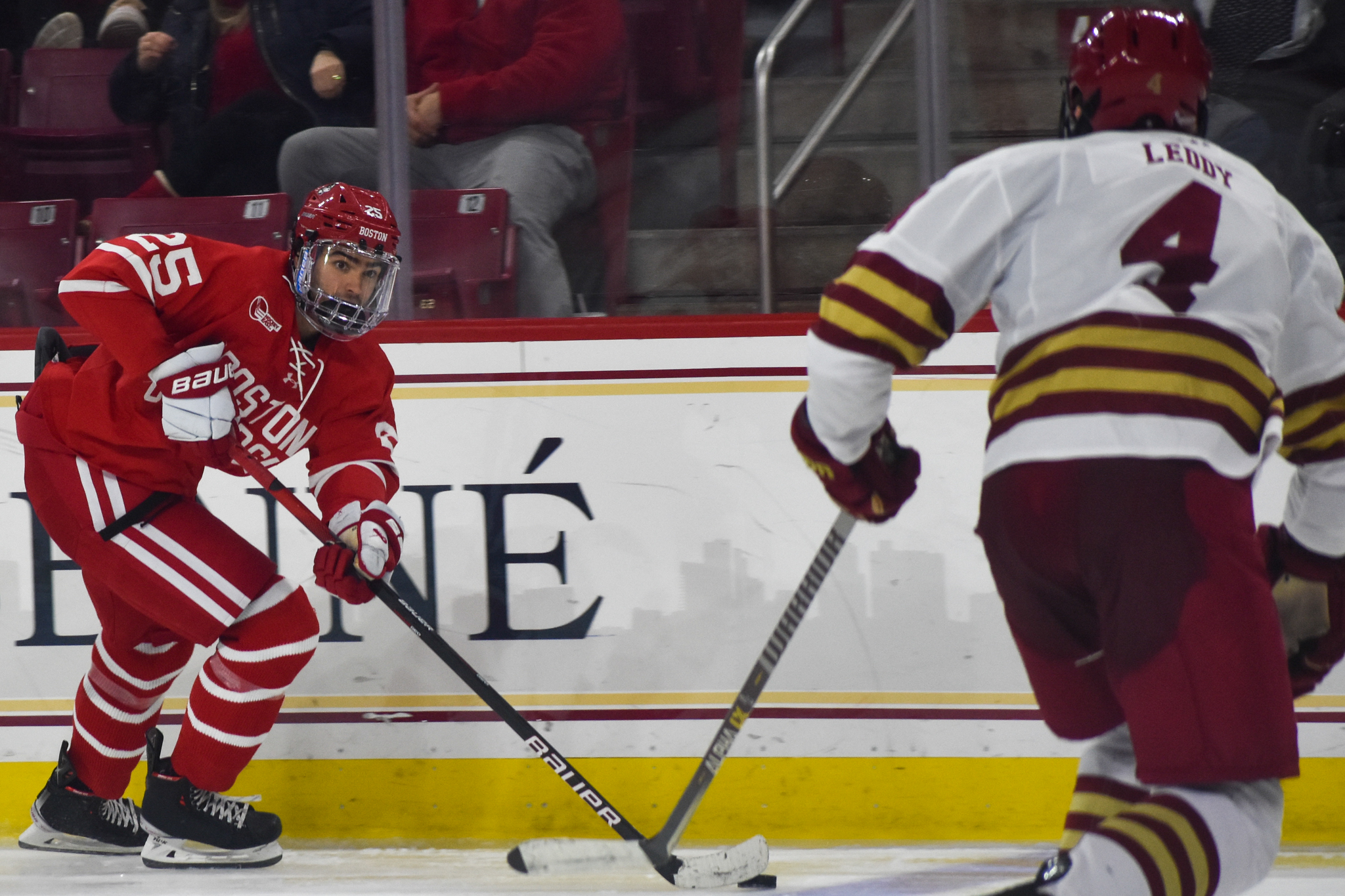 The No. 5 Boston University Terriers (17-6-0, 11-4-0 HE) completed the weekend with six points after a 9-6 victory against the University of Maine Black Bears (9-12-2, 3-8-1 HE). 12 different Terriers registered at least one point in the high-scoring finale of the series with the Black Bears Saturday night at Agganis Arena.

“Very happy that we got the six points for the weekend,” BU Head Coach Jay Pandolfo said. “But just a strange game.”

It only took 36 seconds for the Terriers to open the scoring with senior forward Wilmer Skoog finding the early lead for the second night in a row. Freshman forward Devin Kaplan found Skoog at the right circle, where he fired the puck past junior goaltender Victor Ostman before Maine could set up their defense.

Skoog then doubled the lead at 4:28 with a wrister from the opposite circle for his ninth goal of the season. Sophomore defenseman Ty Gallagher sent the puck to senior forward Matt Brown in the neutral zone, who found Skoog for the score to make it 2-0.

“He has his confidence back,” Pandolfo said about Skoog. “He’s big and strong, really hard to contain when he’s moving his feet and he’s been excellent… I think that line has clearly found some chemistry.”

27 seconds into BU’s first power play opportunity, Brown, a Hobey Baker nominee, found the back of the net for his fifth power play goal of the year. The assist came from freshman defenseman Lane Hutson and senior forward Jay O’Brien and led to a Maine goaltending change.

BU took the lead to 4-0 when Hutson followed up an attempt by Skoog to find the back of the net at 14:45. Brown picked up Skoog’s rebound to complete a pass to Hutson, who fired a backhander past Maine’s backup goalie Connor Androlewicz.

The Black Bears scored three unanswered goals before the first period would end. With four minutes left Maine entered a power play and junior forward Donavan Villeneuve-Houle found an open hole to get Maine on the board.

Just 17 seconds later, before BU could regroup, Maine made it 4-2 on a rebound opportunity by senior forward Ben Poisson at 17:49. Then with six seconds left in the opening frame, freshman defenseman Brandon Chabrier scored his first collegiate goal to cut Maine’s deficit to one.

The second period opened when BU’s all-freshman line connected at 2:41 with a goal from forward Jeremy Wilmer. Forward Ryan Greene came down the ice to find Wilmer in the center, who put one past Androlewicz to bring the Terriers up 5-3.

“We sort of just complement each other pretty well,” Wilmer said. “Quinn [Hutson]’s a shoot-first type of guy, so I like passing the puck. I think Greene is sort of a dual threat.”

It didn’t take Maine long to answer, with junior forward Lyndon Breen finding the back of the net at 5:54 to make it 5-4. Senior forward Didrik Henbrant then tied the game at 7:49.

Maine almost found a go-ahead goal at 11:26 with a shot from Samuel Duer hitting the back of the net, but after a review, the goal was overturned due to goalie interference. Junior goaltender Vinny Duplessis then replaced Commesso in net for BU with the score remaining 5-5.

Gallagher flipped the game when he scored his first goal of the season at 13:09 to take the lead back for the Terriers. Gallagher’s shot from the top of the zone went off a Maine defender and into the back of the net.

To extend the cushion, Quinn Hutson scored on an open breakaway at 2:26 into the third with a pass from his brother Lane to make it 7-5. Wilmer scored his second goal of the game, this time on the power play, at 5:32 to bring the Terriers to an 8-5 lead.

To complete BU’s 3-for-3 effort on the power play, junior forward Luke Tuch found the back of the net at 8:39 to make it 9-5. Maine’s sophomore forward Nolan Renwick closed the scoring for the night with 3:29 left in the game to make it a 9-6 final.

BU will host the Battle of Comm. Ave next weekend on Friday night in the first contest of the home-and-home series with No. 18 Boston College. The puck is set to drop at Agganis Arena at 7 p.m.