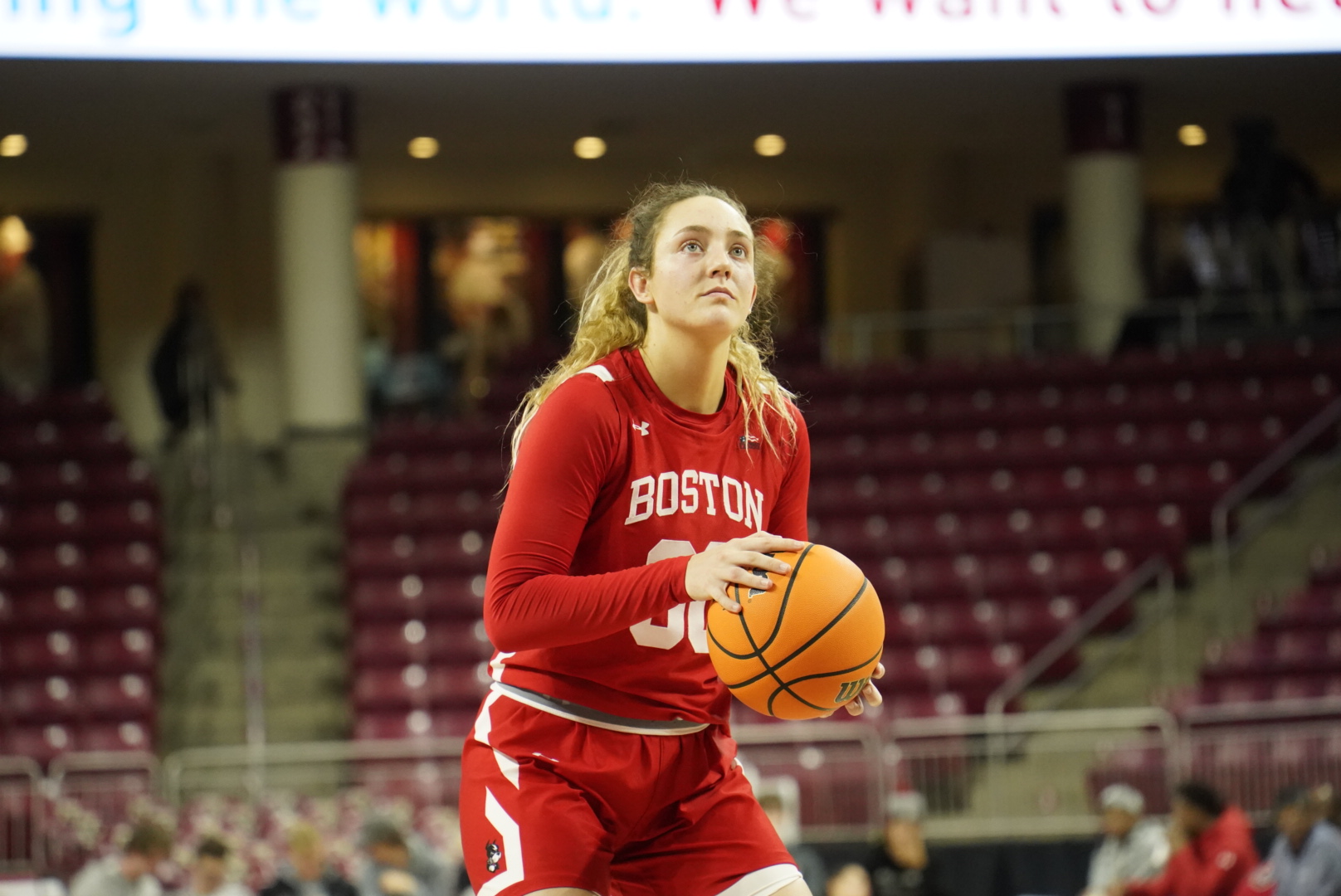 Boston University Women’s Basketball (13-6, 8-0 PL) beat the Loyola University (MD) Greyhounds (7-12, 2-6) 65-57 in Baltimore on Saturday. It was the Terrier’s eighth straight win as they fly through the Patriot League this season. Over halfway through the season, they are undefeated in conference play.

Weimar was guarded by Loyola forward Lex Therien, who finished with a 21-point, 15-rebound double-double. Despite filling up the stat sheet, Therien could not contain Weimar, who was cutting from the top of the key to the posts and baseline for quick baskets all game.

“I thought we started the game well enough to make a statement for the rest of the game,” Boston University Head Coach Melissa Graves said. The Terriers made their statement, and led 20-10 at the end of the first quarter.

Maggie Pina opened up the second quarter for the Terriers with a 3-pointer, which was answered by a jumper from Therien. Loyola guard Devyne Newman hit a three to cut the Terrier lead to four points before Graves called a timeout.

BU guard Sydney Johnson got going after the timeout, hitting a 3-pointer and intercepting a Loyola pass to lay it in on the fastbreak. Therien scored a layup for Loyola as the first half expired, but BU still led 37-28.

Loyola refused to give in after the half, spurred on by a deep 3-pointer from senior Bri Rozzi. Johnson had other plans, though, and dominated the third quarter. No Greyhound could stop her as she racked up 11 points and two steals in the quarter to give the Terriers a 52-44 lead heading into the fourth.

“She just took over at times, especially at the end of the game,” Graves said about Johnson.“We really wanted to get the ball in her hands and take time off the clock. She’s someone we can really trust to control the pace of the game.”

Johnson kept the Terriers in the lead for the rest of the game, and ended with 21 points, five steals and three assists. Loyola kept fighting until the end, led by great efforts from Therien and Taleah Dixon. But a Weimar swing to an open Alex Giannaros for three was the nail in the Greyhounds’ coffin; efficient free throw shooting kept the Terriers comfortably in the lead until the clock hit zero.

Despite keeping it close, Loyola never held a lead in the game. The Terriers know that they’re a good team, and they know what that means for their competition.

“Typically teams play their best against us,” Graves said. “When they’re trying to beat a top opponent, they’re gonna bring their best.”

The Terriers will expect a tough opponent when they travel to Hamilton, New York this Wednesday for a rematch against the Colgate Raiders at 7 p.m.