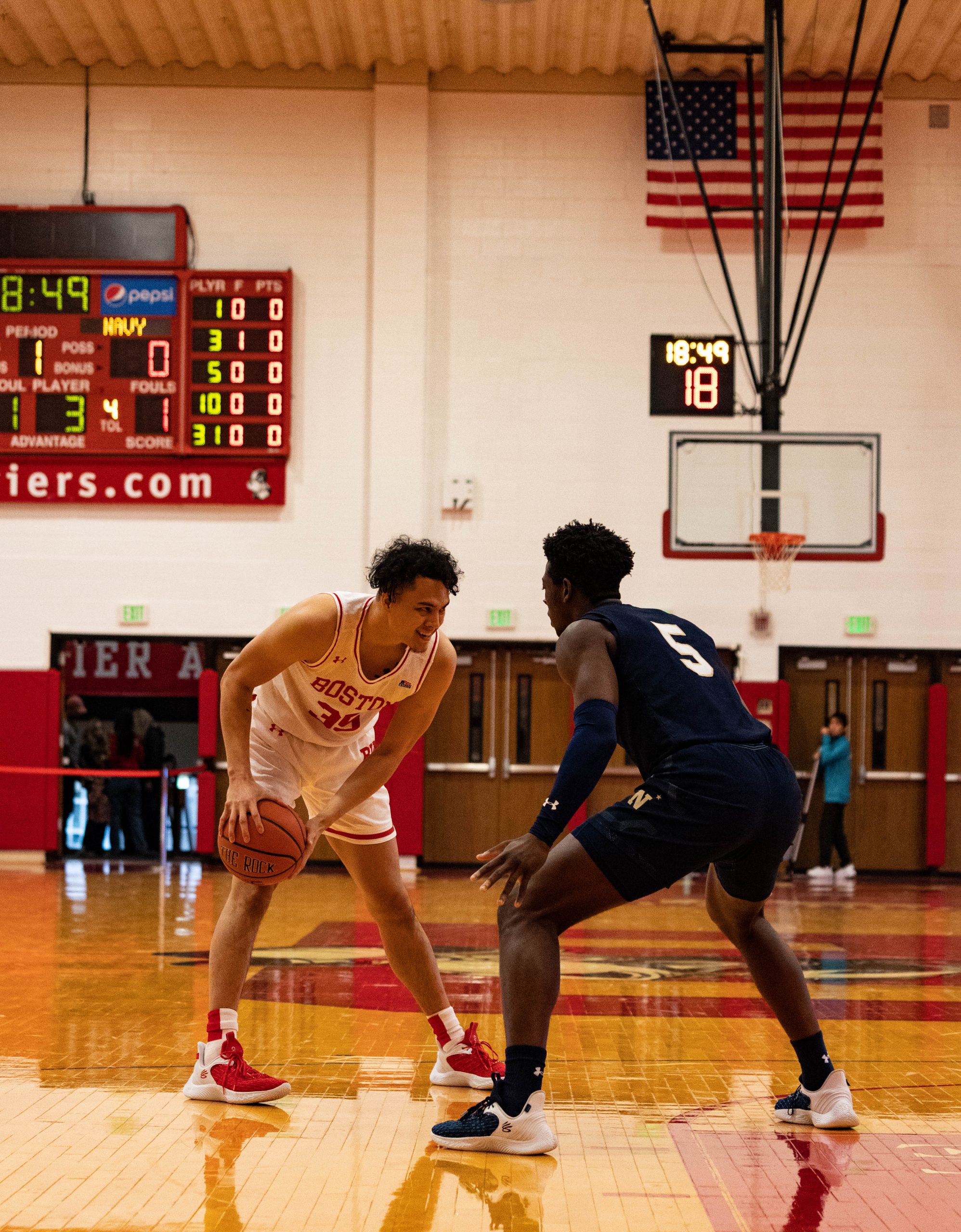 Graduate forward Walter Whyte led the Terriers in scoring with 15 points after an electric second half. Senior guard Ethan Brittain-Watts had an impressive game as well, finishing with 13 points off of 66% shooting from both the field and from the 3-point line.

“He’s got a big hand in [our success],” BU Head Coach Joe Jones said of Brittain-Watts. “He did a great job tonight leading us.”

That leadership Brittain-Watts showed during Saturday’s game was not a one-time occurrence, according to Jones. It’s a trait that shows in every game, and it’s indicative of how important Brittain-Watts is to this team.

“[Brittain-Watts] is the starting point guard,” Jones said. “He’s got a very big leadership role within the team. He’s one of the more vocal guys.”

The bench stepped up and scored 23 points as a unit, which made the difference. This effort was led by junior guards Caelan Jones, who finished with six points; Anthony Morales, who led the team with four assists; and Miles Brewster tied with Brittain-Watts for the Terriers’ most efficient scoring performance, shooting 67% from the field.

“I thought we got some good minutes out of [Jones] and [Brewster] and [Morales],” Jones said. “Those guys played well.”

Jones said he hopes that this bench unit will continue to have performances like these, because he believes that it will be a core part of this team’s success down the road.

The Terriers stumbled to begin the first half. Nearly midway through, the Terriers found themselves behind the Greyhounds 14-10. The Terriers had control of the ball for most of the game up to that point, but they would frequently hand it over to Loyola for them to score. Half of Loyola’s points were off of Terrier turnovers, despite BU only committing four.

The Terriers knew they had to take better care of the ball, and they did. They finished the half with nine turnovers, but only allowed the Greyhounds to score four more points off of them. They also forced seven first-half Loyola turnovers, and that combination allowed the Terriers to take the lead and finish the half with 30 points to Loyola’s 28.

“I thought [limiting points off of turnovers] helped us getting out and moving in transition,” Jones said.

The second half began close, with Loyola’s Kenneth Jones taking a three to make the score 32-31 and re-take control of the game. But BU guard Jonas Harper answered with a three of his own, making it 34-32. The Terriers would never relinquish that lead, as the second half became a scoring onslaught for BU.

Harper struggled in the first half, but he made up for it with his nine-point second half that saw him hit 75% of his shots from beyond the arc. Whyte contributed 10 points of his own and made a team-leading five free throw attempts in this half. The Greyhounds tried their very best to close the ever-increasing gap between them and BU, but it wasn’t enough. By the time the final buzzer sounded, the Terriers earned a confident, well-fought win that was never as close as the first half had suggested.

“I thought we played with some toughness,” Jones said. “We were able to put some distance between us and them in the second half.”

The Terriers will remain at Case Gym for their next game, where they will play the Colgate University Raiders, the top-ranked team in the Patriot League, on Monday at 7 p.m.