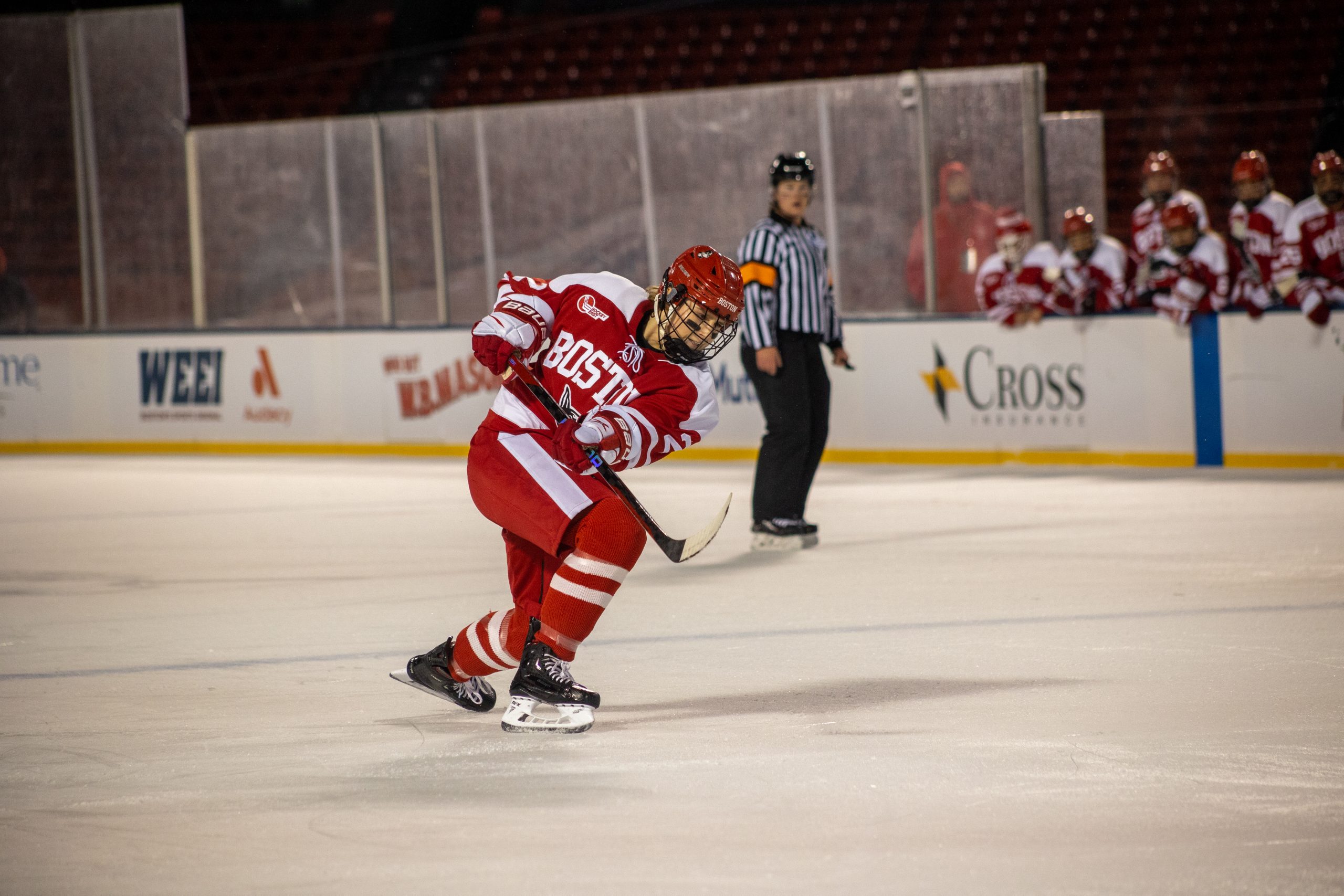 Both goaltenders in this matchup, junior Anna LaRose for Maine and sophomore Callie Shanahan for BU, saw a tremendous amount of activity in the first period. The first 10 minutes alone yielded three goals, and the final 10 saw a fourth.

Maine scored the first goal less than four minutes into the game. Sophomore forward Mira Seregély capitalized on a rebound caused by a wrist shot taken by junior forward Rahel Enzler that Shanahan was unable to corral.

However, BU answered quickly and tied the game up shortly after. Sophomore forward Christina Vote received a pass from freshman forward Clara Yuhn and found herself all alone up against the Maine goaltender. Vote’s shot sailed over LaRose’s right shoulder and into the net for her third goal of the year.

A little over a minute later, BU’s junior forward Lacey Martin took advantage of a defensive miscommunication by the Black Bears that left a wide open lane for Martin to walk in and score. Martin’s goal was unassisted and put BU ahead 2-1.

The Terrier’s 2-1 lead was snapped just before the end of the first period. Maine received a 5-on-3 power play opportunity due to a tripping penalty on freshman defender Brooke Disher and an interference call on graduate defender Alex Allen. With just eight seconds remaining on the advantage, fifth-year forward Grace Heiting tapped the puck home on a tic-tac-toe style play to tie the game at 2-2. Heiting’s goal was assisted by Enzler and fifth-year defender Emma Lange.

The second period saw no shortages of opportunities from either team, but Maine would score the lone goal at 13:14.

Seregély, the first goal-scorer of the night, sent the puck behind the net to sophomore forward Alyssa Wruble, who passed the puck out in front to be nailed home by a powerful shot of Enzler. With her second goal of the season, Enzler picked up her third point on the night.

BU outshot the Black Bears in the second period but were still behind 24-21 in overall shots on goal through two periods.

The third period opened with a golden opportunity for the Terriers. Maine’s senior forward Morgan Trimper would get sent to the box for roughing at 3:44. Just 11 seconds later, BU senior forward and team point leader Julia Nearis scored to tie the game at 3-3. Her ninth goal of the season was assisted by freshman forward Sydney Healey as well as senior captain Nadia Mattivi.

With the score still tied 3-3 at the end of regulation time, the two teams went into 3-on-3 overtime play.

However, 65 minutes of hockey was not enough for these two teams, and the game headed to a shootout. Healey gave BU the early shootout lead, but freshman forward Luisa Weicke responded for Maine. Nearis sealed the extra point for the Terriers with a third-round make.

BU will continue to look for their first win of the new year when they face the University of New Hampshire Wildcats on Saturday. Puck drop is scheduled for 4 p.m. at the Whittemore Center.