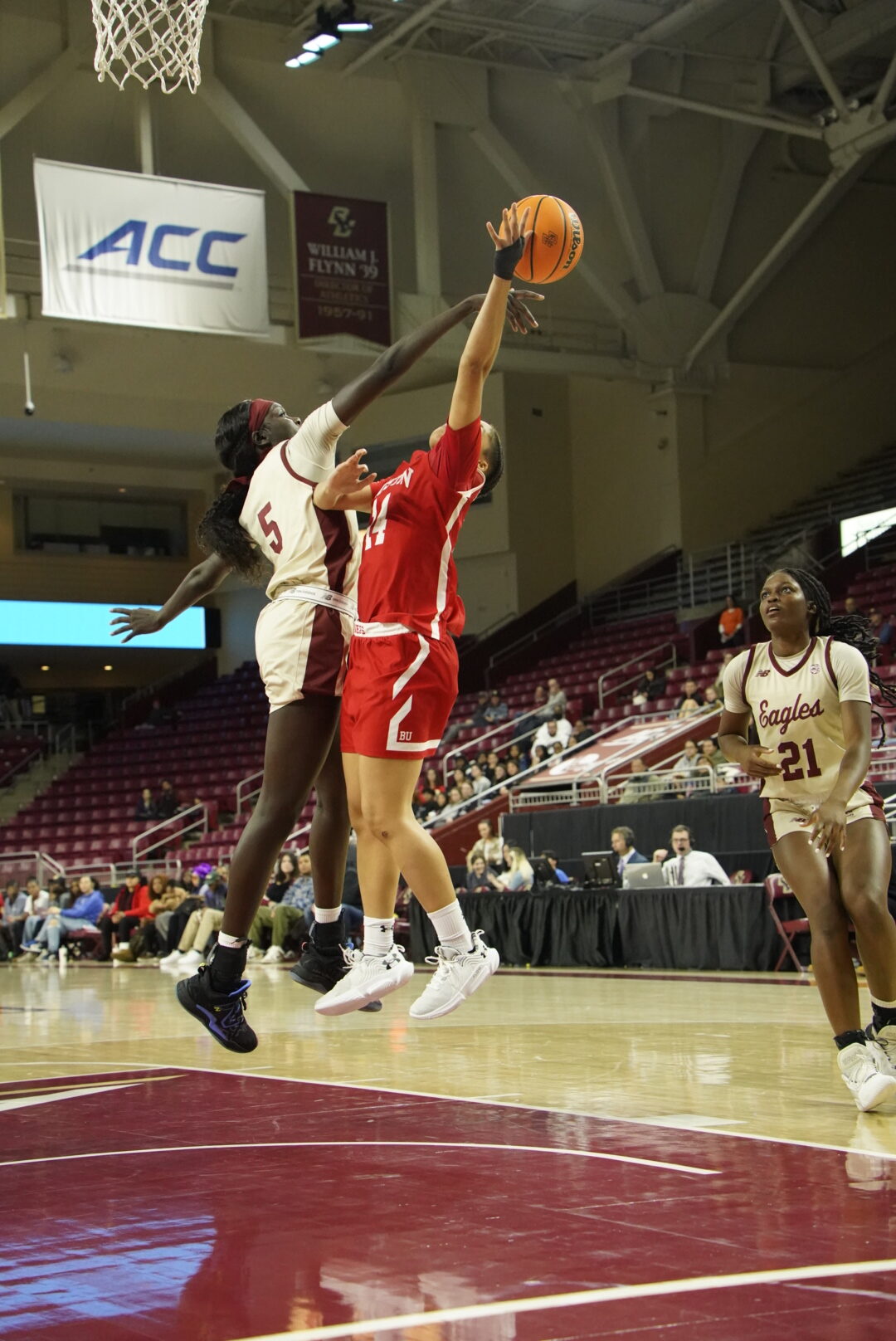 With seconds left in the second quarter, sophomore guard Alex Giannaros received the inbound off a Navy free throw. She weaved through several defenders, before finding her spot at the bottom of the BU logo at Case Gymnasium. The buzzer went, followed by a roar; Giannaros drained the buzzer-beating logo three, her fourth long ball of the quarter to cap a 17-point first half performance.

No amount of words would describe the game for the Terriers better than Giannaros’ logo three; just about everything went right in what would become BU’s largest win of the season.

“This was a great team win, everyone got to get in and contribute in a positive way,” BU Head Coach Melissa Graves said.

The Terriers flexed their strongest muscle against the struggling Midshipmen — who won their first game of the season on Sunday — making nine threes after entering the game as the number one 3-point shooting team in the nation.

BU finished with a 37.5% clip from beyond the arc, but were shooting the three at over 60% through three quarters before a cold fourth quarter painted a deceivingly unimpressive shooting performance.

“That’s what we do,” Giannaros said. “It’s not a surprise that we’re shooting this well.”

For every three they made, the Terriers were even more dominant in the paint. Junior forward Caitlin Weimar finished with a double-double — her 10th of the season — as she hauled in 14 rebounds and scored 17 points on 70% shooting.

“We talked about getting the ball inside and playing inside and I thought we did that really well,” Graves said, “Especially with Caitlin.”

On the other end of the floor, Weimar and senior forward Maren Durant were impenetrable, allowing Navy just six points in the paint and forcing the Midshipmen into difficult jumpers all night long.

“We have size that alters shots and it makes it a lot harder for guards to get in there (the paint),” Graves said.

Navy guards Sydne Watts and Maren Louridas particularly struggled, combining to shoot 11-for-30 from the field and 0-for-8 from three on a myriad of difficult looks.

But Graves was sure to emphasize that her team’s dominant defensive performance in the paint was a collaborative effort.

“We continually work on our helpline rotations and making sure we have early helpline to protect the paint,” Graves said.

The Terriers continued their excellence both in the paint and behind the 3-point line, but BU was consistently dangerous in transition, too.

“I also think our guards did a great job today even running the floor in transition, they sprint the floor,” Graves said. “The spacing was really good.”

That spacing was of notable importance to senior guard Sydney Johnson, who finished with five assists, a profit gained through precise distribution in transitions throughout the game.

Johnson, like all of her teammates, was playing her role with evident confidence; two of her assists came on impressive one-handed passes down the floor.

“We’ve always known that we’ve had the talent to do what we are doing,” Giannaros said. “So keep trusting the process and everything we’ve been working for.”

The Terriers, atop in the Patriot League standings and as confident as ever, will now hit the road for their next two games of conference play, the first of which against Loyola Maryland on Saturday at 2 p.m.