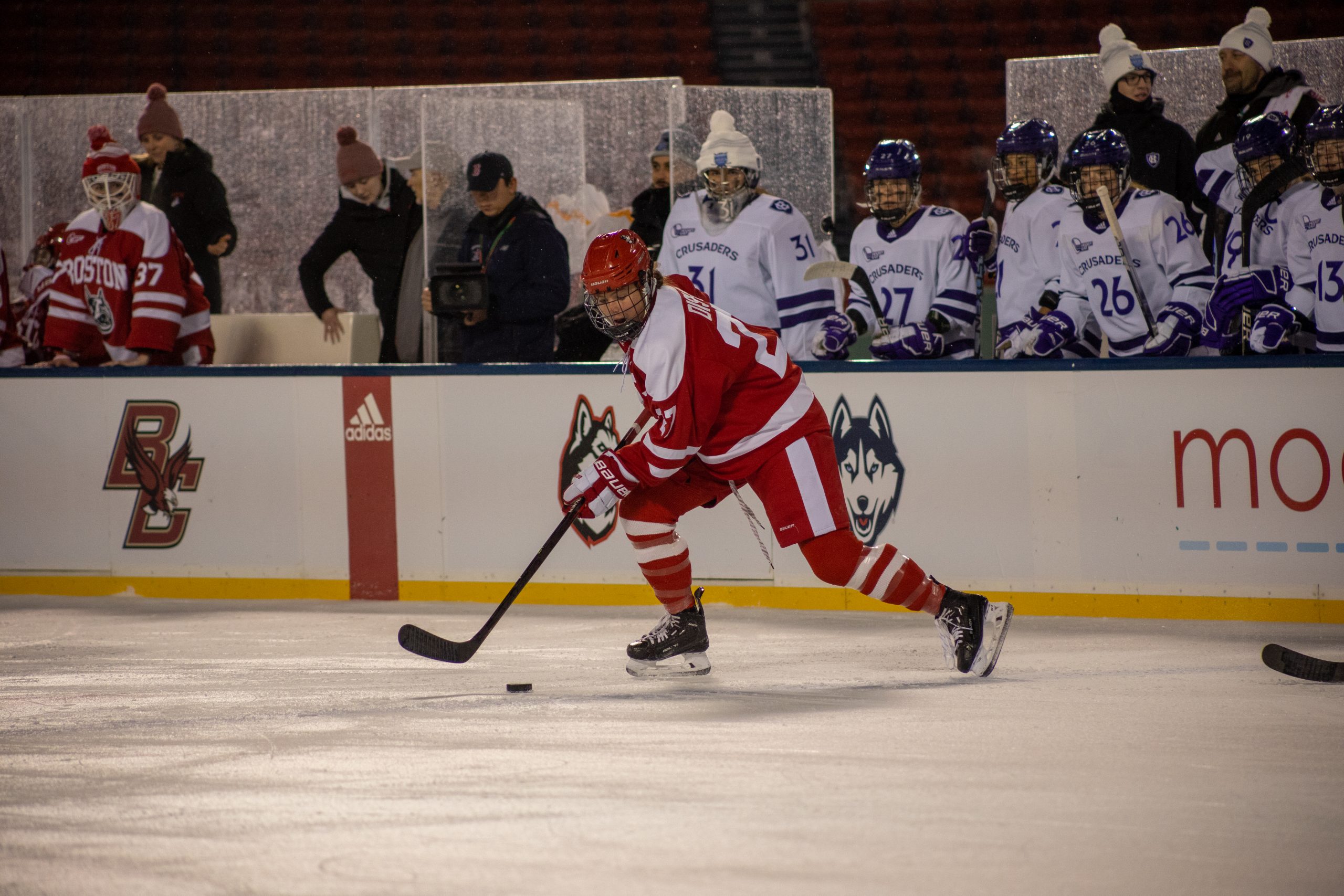 “Good to get the two points,” BU Head Coach Brian Durocher said. “We played a solid game 5-on-5. Obviously, they got a couple of power play goals and we probably gave up a few too many shots overall, but [Brändli] did a real nice job.”

For the fourth game in a row, BU gave the net to Brändli. In a two-game set against Providence earlier in the year, Brändli saved 78-of-85 (.918) Friar shots. After her big performance today, her totals increased to 118/127 (.929) over three games against Providence.

“I didn’t know that, that sounds crazy,” Brändli said. “I just love those games that when the odds are against you, and you can really step up. … I love those close games and [to] really step up for the team to give them a chance to win.”

BU got the game started with a goal from their seventh defender, Julia Shaunessy. After several high-chance rushes, the Terriers found themselves on another rush as they went from defense to offense.

Junior forward Madison Cardaci chipped the puck up to sophomore forward Christina Vote. Vote entered the blue line before sending a cross-ice lead pass to Shaunessy, who split two Friar defenders to receive the pass cleanly. Shaunessy made a move before beating Providence goaltender Sandra Abstreiter to the glove side for her second goal of the season.

BU doubled their lead with just under 10 minutes left in the opening frame. After captain Nadia Mattivi entered the zone on the power play and played pitch and catch with Vote, Vote skated towards the slot around before finding senior forward Julia Nearis deep in the left circle. Nearis hammered a one-timer past Abstreiter for her eighth goal of the year to make it 2-0.

Despite the shot counter reading 10-7 in favor of the Friars, the Terriers’ rush opportunities in the opening frame allowed BU to open the game up and dictate play.

“I liked the fact that they were sharing the puck and moving the puck,” Durocher said. “We got it up ice quick.”

After killing off a penalty at the beginning of the middle frame, Providence cut the lead to 2-1 on a power play of their own. Mattivi and senior forward Jesse DeVito took back-to-back penalties to create a 5-on-3 for the Friars.

“It’s one thing to play tough,” Durocher said. “It’s another thing if you’re taking not good penalties, and I don’t think we were in that category too much tonight.”

BU came out of the middle frame with their 2-1 lead still intact but was outshot by the Friars 16-7. Brändli made several key stops, including a diving glove save with the Friars pressing for the tying goal.

“When there’s 42 shots and however many more pucks that are buzzing around near the crease, it’s neat to see somebody who really does control things,” Durocher said.

Providence tied the game with over seven minutes left to play in regulation. After Shaunessy took a penalty for body checking, the Friars clicked on the power play. The chaos around the net saw Brändli down and out and a loose puck for DeBlois to shovel in to tie the game. For DeBlois, it was her fifth goal of the season and was assisted by Peterson and Hjalmarsson.

Brändli, despite giving up the tying goal, had another sensational period between the pipes for BU. She stopped 13 of 14 Friar shots, including a diving glove save on Peterson with under three minutes to go in a tie game.

“I think one thing that you as a goalie always have to know is where your next most dangerous player is,” Brändli said. “And I think I’m pretty good at scanning ice and see where players are and possibly will go, and I think that’s what I did, especially in the last save I made there knew she was going to creep in in the back door. Once you decide to push, you just got to go all in and that’s what I did.”

With no score in OT, the teams headed to a shootout. Nearis scored first for BU and was answered by freshman forward Reichen Kirchmair. In the fourth round, junior forward Lacey Martin gained the extra point for the Terriers.

“I like to shoot,” Martin said. “[Arbstreiter] was a tall goalie, so shooting low and inwards was probably a better situation. So I just went in and shot low.”

The Terriers will face Maine on Friday at Alfond Sports Arena. Puck drop is scheduled for 4 p.m.