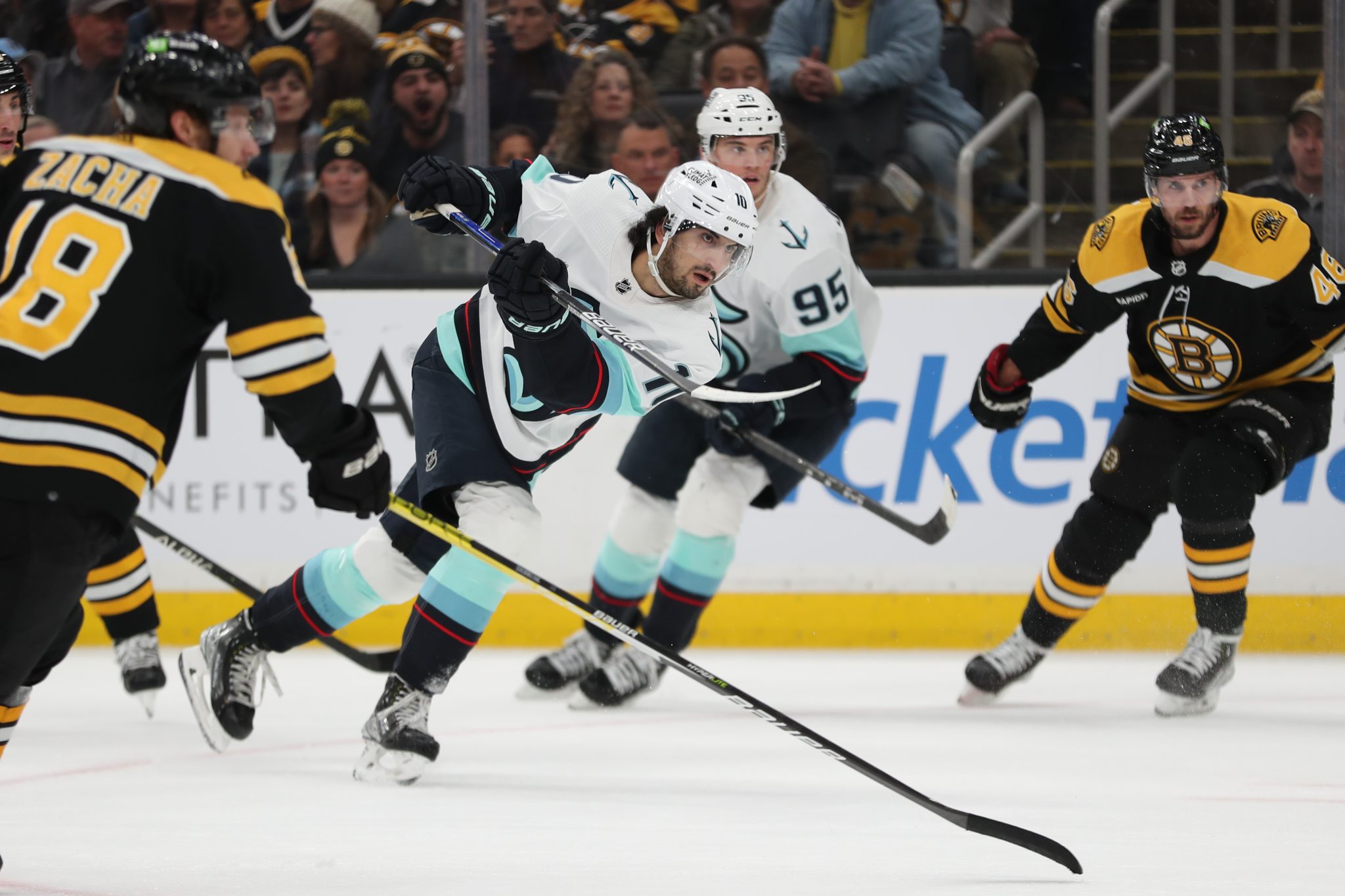 As the National Hockey League’s 2022-23 regular season eclipses the halfway mark, the forerunners for Rookie of the Year have become more clear. Here is a look at what the league’s top rookies have been up to.

Seattle Kraken center Matty Beniers has been in Calder contention since the beginning of the season. However, over this past month, the 2021 second-overall pick has separated himself from the pack.

Ever since the turn of the calendar year, his Kraken team has been turning heads. The two-year-old organization is currently riding a franchise-best eight-game win streak, including a perfect 7-0 road trip. They became the first NHL team to post seven-plus wins in a single road stretch and remain the only undefeated team of 2023.

In the midst of it all, Beniers has proven to be a significant factor in his squad’s success. The 20-year-old is playing big minutes for the Kraken, slotting in as first-line center. He is tied with linemate Andre Burakovsky for most points on his team and leads the rookie scoring race by 10 points with 36 (17g, 19a) through 42 games played.

Over that win streak, Beniers has 11 points (6g, 5a), including a two-point effort in the Kraken’s most recent game on Jan. 14, an 8-5 win over the Chicago Blackhawks. And although he did not get on the scoresheet on Jan. 12, it took a full-team effort to shut out the Boston Bruins 3-0. The hometown kid handed the league’s hottest team its first regulation loss at home of the season.

Following a lackluster inaugural season, finishing third-last overall, the Kraken are poised to overthrow the Vegas Golden Knights for first in the Pacific Division. The team sits just two points behind their division rival with two games in hand.

Over the second half, Beniers will play a crucial role in determining the ever-changing Western Conference standings. But first, the youngster will head to his first All-Star Game, only one of two rookies named through the initial NHL Hockey Operations Department selection process.

The Winnipeg Jets’ 2020 10th overall pick is also making a case for himself. Perfetti is tied with Anaheim’s Mason McTavish for the second-most points by a rookie this season, albeit in four fewer games. The Canadian kid was sidelined for two weeks starting in late December with an upper-body injury. Nonetheless, Perfetti’s game play has not faltered since coming back.

He has been a point-per-game since being reinstated in the Winnipeg lineup on Jan. 6 and has assisted on the Jets’ last two game-winners. The first came on Jan. 13’s 4-1 victory over the Pittsburgh Penguins and was part of Perfetti’s eventual three-point night. The win gave his team its seventh win in its last eight games.

The second came during Winnipeg’s most recent 2-1 win against the Arizona Coyotes on Jan. 15. Perfetti showed his patience with the puck, carrying it past the net, to break down the Coyotes’ defensive structure. From there, he initiated the drop-pass to linemate Mark Scheifele to put in motion a Blake Wheeler tic-tac-toe goal.

This game-winner moved the Jets past the Golden Knights for first in the Western Conference and past the Dallas Stars for sole possession of first in the Central Division. Playing on the second line alongside the experienced Scheifele and Wheeler, Perfetti has big shoes to fill. As the Jets finish the second half of their season, the young player will gear up for his first NHL playoff appearance.

Stepping outside of playoff contenders, Dylan Guenther remains a bright spot for the struggling Arizona Coyotes. The 2021 ninth-overall pick has been playing on Arizona’s second line, but most notably this season, lit it up with Team Canada at the IIHF World Junior Championship.

Competing on the international stage, the 19-year-old showcased his true potential. Guenther only trailed Connor Bedard in tournament goal-scoring with seven tallies in the same amount of games played. The winger was part of Team Canada’s electric power play unit with six of his seven goals coming on the man advantage.

However, no goal was more important than the one Guenther scored 6:22 into overtime of the Gold Medal Game. The golden goal sealed the 3-2 victory over Czechia, giving Canada its 20th championship title.

Guenther has since re-joined the Arizona roster that is still looking for its first win of the new year. He notched his fourth goal of the season — all four coming on the power play — on Jan. 12 against the Ottawa Senators with a slick, top-shelf wrister.

Following the tournament, Guenther’s playing rights were traded from the Edmonton Oil Kings to the Seattle Thunderbirds in part of a lengthy Western Hockey League trade. The Thunderbirds have been at work compiling a stacked roster ahead of the WHL trade deadline as Guenther joins five of his gold medal-winning teammates.

Whether or not Guenther will be loaned back to make another WHL championship run is still unclear, but for now, the Arizona forward is set on gaining invaluable NHL experience.